The most recent fall semester was a testing ground for college campuses across the nation, as many welcomed students back but with strict rules in place to protect against COVID-19.

For spring, many universities are pivoting, taking what they learned in the fall and applying it to this new semester to better serve students and keep them and staff safe.

Creighton University in Omaha, Neb., was forced to close its popular Java Jay concept last year, but many students said they missed the food. This semester, the college will offer a Java Jay-inspired late-night menu five nights a week. “This is an exciting way we are adapting to the restrictions COVID has created,” says Kris Reynolds, Sodexo general manager.

And at Texas Tech University in Lubbock, three quick shops, scaled-down versions of retail markets, will be introduced this spring, enabling students to speedily get in and out and minimizing “milling around,” says Kirk Rodriguez, director of dining services.

“Where possible, we created these areas right off the entry, to reduce crowd sizes,” he says. The campus will start with three quick shops “and see how they go,” he says. They’ll be in larger units, “to better support the volume in those locations.”

The foodservice team analyzed spending history, customers’ shopping habits and sales data to create these condensed markets. The quick shops will contain the top four or five items in every category—drinks, snacks, candy bars, etc.—as well as items like fruit and yogurt parfaits and a surprising winner: banana pudding. There will also be beverages in 12- and 24-packs that a student could keep in their room if they were in isolation, Rodriguez says.

Texas Tech is also relaunching Transact Mobile as part of its meal plan mobile ordering. “It allows us to better manage the system and without fees, whereas Grubhub charges the customer a fee for every order,” says Rodriguez. The foodservice department will especially promote using the app for the quick shops, in which mobile orders would be picked up in a separate area. “We’re trying to keep the face-to-face piece, but we want to continue to be safe about it,” he says.

Bryn Mawr College in Pennsylvania is expanding its menu this spring semester. In the fall, the dining services department unified the menus in its two dining halls, so they served identical dishes. They have very different serving styles—one’s traditional, the other’s more like a food court—and typically different offerings, which meant that at some meals there would be a surge of students at one dining hall, due to a popular item being served.

“We didn’t want to create a draw from one dining hall to the other,” says Assistant Director Richard Clow. “In a normal semester, students might pile into one dining hall if there’s something more popular on, so this was a strategy to make sure they were safe. The last thing we wanted, also, was it taking hours and hours to serve people.” 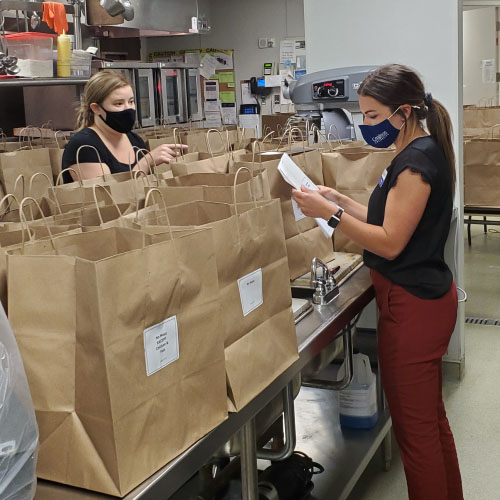 While the unified menus worked to reduce crowds, there was a downside: “It was hard for the culinary team because they had to simplify things,” he says. “They’re used to being very creative.”

This spring, a wider variety of meals will be offered at both dining halls, and the university may also switch away from a unified menu.

Students will also be able to digitally reserve meal times for any meal, up to six days in advance.

The University of Richmond is also expanding its offerings this spring, having cut back from seven or eight stations in the fall. “We couldn’t offer everything so we figured out the most popular items and started off with that in the fall,” says Terry Baker, executive director of dining services.

She’s already expanded from premade salads in clamshells to a mini salad bar, but this spring, “knowing the students are very health focused, we’ll go to a full-blown salad bar with 12 choices and that will be served,” she says.

Baker’s also planning to bring back some favorite stations on either a permanent or a rotating basis, including panini/gourmet grilled cheese, made-to-order pasta, made-to order mac and cheese and a burger bar.

As well, she’s going to expand the special events she holds for students. She gradually introduced these in the fall, including a Latinx Dinner, Oktoberfest and a Southeast Asia dinner, and “they were such a success that for the spring we’ll expand to include many of the normally scheduled events such as the Black History Dinner, Valentine Desserts, Mardi Gras Lunch and Beach Party Dinner,” she says. Not only does this make for a fun night for students, it also cheers staff up, she says. 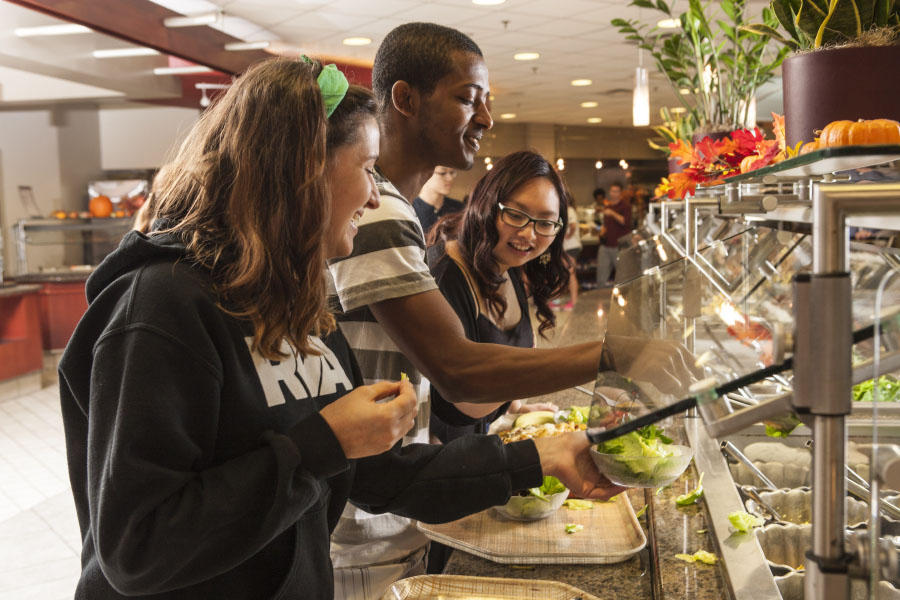 She’ll also run weekly “monotony breakers” when there’s no special event planned, such as sushi night and seafood and steak night. “These break up the everyday routine and get students participating in something. We want them to be excited.”

Finally, the University of Richmond will expand its catering offering this spring. Like all campuses, the catering department has been hit hard during COVID, but in the fall, Baker developed a new menu for faculty and the community, who could pick up meals —hot and cold—in boxes. For the spring, she’s launching this for students, who can pick up boxed food for a movie night, or painting party or other event. “We worked closely with the student groups and came up with a menu together for what they’d like,” she says.

Virginia Tech in Blacksburg is going to increase the number of available seats in its retail and all-you-care-to-eat dining center for the spring semester, says Brian Grove, senior associate director for dining services.

In the fall, the foodservice department reduced seats from a total of 3,700, to almost 1,500—more than a 50% decline—in order to keep students socially distanced. But students have done really well, Grove says, and because of that, the pods they’re in with their friends are being increased from six people to 14. The expanded seating will allow more people to dine together.

For the fall, dining services offered only four-top tables, but will offer a limited number of six- and eight-tops this spring. To remind students of the rules, Grove has found a vinyl sticker placed in the middle of the table works best because no one can move it and it can be easily disinfected.

Colorado State University in Fort Collins is also pivoting, thanks to lessons from the fall semester.

In addition, quarantine meal prep is going to change. Last semester, food for quarantined students was prepared in two foodservice facilities, but that’s being shifted to the commissary. “It will be more centralized and will be a better use of our employees, and it will take the pressure off those two facilities,” says Jason Scott, project and programs manager. It will also mean more consistent food and overall labor savings.

The school’s making another switch for this semester, from pre-packaged foods to build-your-own models. All food will continue to be served by foodservice employees, but students can now choose their own sides and add more or less of items to their meals. “This will help increase the value perception,” Scott says.