Less than two months after students left campus last spring, the foodservice department at Sonoma State University in Rohnert Park, Calif., was up and running with something new.

The campus had become an alternate care site, housing patient overflow from nearby hospitals, and during that time, the dining team fed the 36 nurses and doctors who looked after them.

Sonoma State also began using two residences for local people in need: one to keep homeless people safe from COVID-19, and the other for those who couldn’t quarantine in their home or nursing home.

During this year’s pandemic, many foodservice departments have had fewer people on-site to feed, so have been looking at how else they can help out in the community, which has the additional perk of keeping foodservice staff engaged.

At Sonoma State, a local catering company fed the usual sorts of customers, leaving the foodservice department to service the medical staff. Culinary Services Director Nancy Keller put her employees on a rotating schedule of three teams to ensure continuous service if anyone got sick. The team fed the medical employees three meals a day from May 10 through Aug. 3.

Midnight meals were bagged; for the other two meals, guests chose from four or five choices (including those catering to dietary preferences) in the food court.

Then, on Aug. 22, wildfires started in the area so the foodservice department began working with FEMA, delivering bags of cold prepared food to evacuees three times a day. “We’d drop that food with the Red Cross, and they’d disperse it,” Keller says. All food was prepared a day ahead so it could have plenty of time to sit in the refrigerator and become thoroughly cold, eliminating health concerns.

The school fed evacuees for more than two weeks. “People kept coming from other places, and the counts kept jumping up and down,” Keller says. In general, her team was feeding 56 to 92 people daily. If there were more people than expected, she just moved up the food prepared for the next day to be eaten immediately.

Next up, early in 2021, the team will be feeding the California Conservation Corps, which is coming to do cleanup. The challenge with this is the lunch needs to be 3,000 calories, Keller says.

Similarly, Washington University in St. Louis stepped in early in the pandemic to feed quarantined medical personnel staying in university housing in an effort to prevent bringing COVID-19 back to their homes. Dining services and Bon Appetit employees fed 80 to 90 people at a time between mid-March and the end of May. 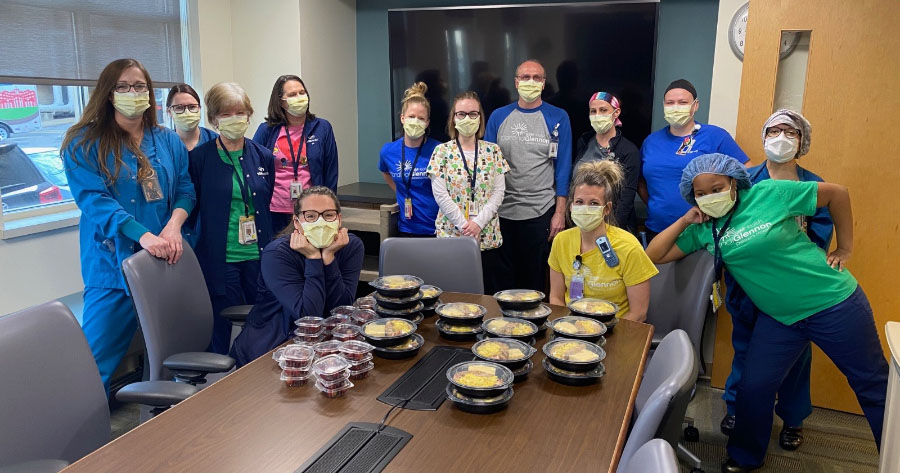 It was hard to anticipate how many people they’d be feeding at any given time, says Andrew Watling, associate director of dining, so there were often excess meals. They delivered these to local hospitals to feed the hard-working staff there. “We always wanted to make sure we didn’t under-prepare the quarantined meals,” he says.

The Morrison Healthcare team at Cleveland Clinic in Ohio has also been helping feed those in need. For Thanksgiving, foodservice staff joined forces with hospital volunteers and employees from the local Meijer supermarket to provide holiday dinners for 2,000 local folks.

“Our chefs jumped right on it and said they could do it,” says Wendy Phillips, regional vice president for Morrison Healthcare at Cleveland Clinic. “Our chefs volunteered their time and some hourly people did too, to go above and beyond their duties. Our senior executive chef said what he really gets passionate about is projects like this.”

At another healthcare facility, Atrium Health Union, in Monroe, N.C., Morrison Healthcare provided free breakfasts and lunches last summer through the Kids Eat Free program. Morrison and Atrium delivered 15,964 additional meals to kids, during a three-week gap when they wouldn’t be receiving meals from the school system.

"One chef told us it was fabulous to do something that came from the heart and not for the paycheck.”     —Damian Monticello

Typical lunch fare included lasagna, chicken quesadillas or barbecue pork sandwiches. All entrees were served with vegetables, fresh fruit and milk, and each kid also received a second bag containing fruit, cereal and boiled eggs for the next morning’s breakfast—or, on Fridays, for the weekend.

And at Florida Blue in Jacksonville, corporate hospitality services manager Damian Monticello and his team have been providing meals for Feeding Northeast Florida since late March. The need for this program is so great that by the week of Christmas the program will have prepared half a million meals. 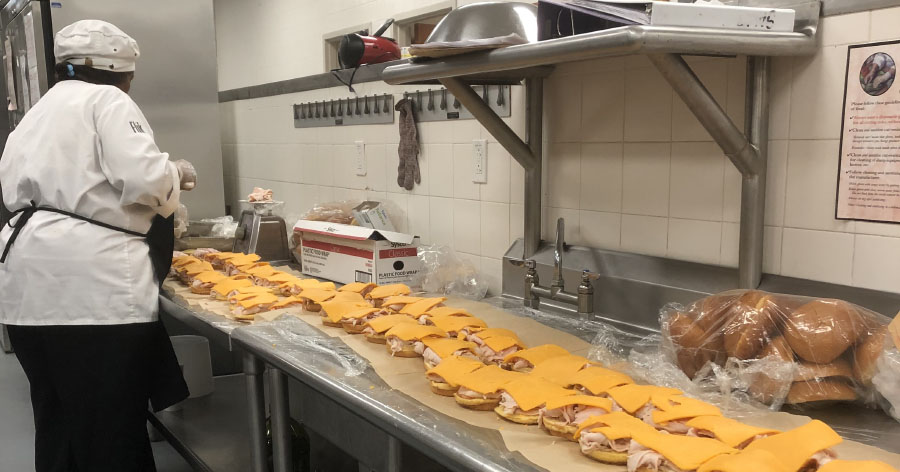 Monticello thinks it will continue through at least the end of 2020. “It’s been such a great community use of these dormant kitchens on our campus,” Monticello says. “This is also a great use of our staff and keeps them employed. One chef told us it was fabulous to do something that came from the heart and not for the paycheck.”

Sodexo has teamed up with national nonprofit Swipe Out Hunger to help students dealing with food insecurity during this challenging time and beyond. Last spring semester, the program provided more than 15,500 meals for 1,100 students, and it’s now up and running on 16 campuses, with 100 anticipated by the end of 2021.

To sign up for Swipe Out Hunger, students complete a four-question intake form. A number of free meals are then added to their student ID card, meaning they can redeem those meals anonymously in their school cafeteria.

Minnesota State University in Mankato implemented the program in September and 377 students have signed up for it, says Karen Anderson, assistant director of community engagement. She began by offering students 10 free meals but dropped that to three when she saw how many students were in need.

Though the school has a number of avenues to help students, Swipe Out Hunger is one of the top ones they look for, she says: “The thing with being food insecure is you just want to be a normal student, and if you’re a normal student, you don’t have to think about where your food’s coming from.”

A big benefit of the program, Anderson says, is that it helps her identify which students are dealing with food insecurity, allowing her to direct them to other resources, both on and off campus. “We realize the swipes are really just a Band Aid, which is unfortunate, but we’re grateful for what we have,” she says. "So we help students understand that and tell them other resources they can look at.”