Louise is an 80-year-old resident of Cedar Rapids, Iowa. Her income is less than $10,000 a year. She lives alone and she is homebound. 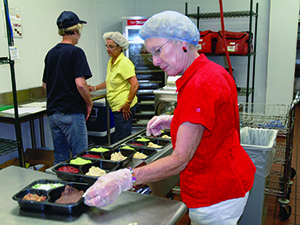 Louise represents the typical client of Horizons Meals On Wheels, a social services program that provides meals for about 800 residents in southeastern Iowa. She is also part of what Ellie Hollander, CEO of Meals On Wheels Association of America (MOWAA), calls “the silent epidemic”—the 15.3% of Americans over the age of 60 who, according to the State of Senior Hunger in America 2012, are food insecure. And the ranks are growing.

People like Louise, who want to remain independent but are too frail to cook for themselves, rely on home-delivered or congregate meal programs to provide them with sustenance. But even as the number of Louises in the U.S. increases, the ability of senior meal programs to satisfy their needs is diminishing.

“We can document that senior meal programs serve about 2.5 million people a year,” says Hollander, who acknowledges that compiling accurate numbers is challenging. “But the need is 9.3 million seniors struggling with hunger. That’s a huge gap and the gap continues to grow aggressively as the demographics shift dramatically. The senior population is set to double by 2050, and we’re not prepared for that. We call it the silent epidemic because so many people don’t even realize that it’s your neighbor next door, it’s the teacher you had when you were in first grade, it’s that military veteran returning from overseas. It’s an ordinary-person type of an issue.”

In the U.S., senior meal programs are administered in one of two ways. Some groups operate their own programs, managing them with government funds, private donations and their own fundraising efforts. Other agencies choose to contract out feeding programs to other organizations.But no matter how meals are delivered or served, the major challenges facing all of them are, at heart, financial in nature. At the top of the list is government funding, or the lack thereof.

In FY 2014, Congress appropriated $814 million for senior nutrition programs, and MOWAA has asked for $819 million in FY 2015. But, Hollander notes, that amount of money would only bring the level of funding back to what it was in 2010.

In addition, she says, food costs continue to increase, and federal mandates for more nutritious meals are adding to that cost. The rising cost of fuel also is adversely affecting home-delivered meal programs. Finally, the number of volunteers, the lifeblood of many of these organizations, is shrinking.

Dianna Young, CDM, director of Horizons Meals On Wheels, faces these challenges every day. “One of our problems is that federal funding has remained steady, but the costs to run the program have not,” says Young, whose program delivers meals to about 700 people a day and serves about 100 more a hot lunch at two congregate sites five days a week.

“The sources of AAA funding include donations clients give to the program,” Young explains. “Clients are asked to contribute to the program, on a sliding scale based on income, from $1 to $3.50. Those voluntary contributions have significantly declined, and the agency has had to pass on that funding reduction to the provider.”

The decline is troubling for another reason, she notes.

“This tells us that people are facing rising costs in their own lives, but it also suggests that our client base is down to the people who really need the meals.”

While the loss of funds has not affected the home-delivered portion of the program, Horizons was forced to stop serving meals at five congregate meal sites, leaving it with only two senior feeding sites.

In Elmira, N.Y., the Chemung County Meals On Wheels program, which delivers between 250 and 300 meals a day, saw its government funding cut by 6%. Darlene Ike, the program’s director, says the loss of money didn’t stop meal delivery “because I refuse to let anyone go hungry.

“But what it did to us was this. In November we send out Blizzard Bags. Each bag contains two breakfasts, two lunches and two dinners, all shelf-stable items,” Ike adds. “Normally clients will receive three of those bags so they’ll have six days’ worth of food in case we can’t deliver because of the weather. Last year we had to cut back to two bags and we ended up having a severe winter, so it really hurt.”

In Graham County, Ariz., the Southeastern Arizona Community Unique Services (SEACUS) program saw $42,000 cut from its budget when the state chose to reallocate federal money to five Area Agencies on Aging throughout the state. Program manager Royce Hunt says nearly two-thirds of that cut affected the Meals On Wheels program. As a result, SEACUS has decided not to accept any new clients—even if someone is dropped. Graham County currently has 27 seniors on a waiting list.

“That list will grow,” Hunt says. “This is going to have a real impact on our program.”

Some other programs affected by funding cuts include:

Even in cases where governments step up to the plate, it is not always enough.

The Georgia Council on Aging, which operates Meals On Wheels programs throughout the state, is seeing a rapid increase in the number of people on its waiting list even though the Georgia General Assembly recently increased its funding of Meals On Wheels by $1.5 million. Executive Director Kathy Floyd told the Albany Herald newspaper, “It’s a great move by the Legislature, but it will not meet the needs of the program.”

The lack of funding often causes senior meal programs to turn to corporations and the community for donations. Companies like Walmart have been very supportive of Meals On Wheels. The Walmart Foundation has donated millions of dollars to senior meal programs over the years, most recently giving $100,000 to the South Mississippi Planning and Development District for its home-delivered meals program. The money means that the program will be able to add 100 seniors to the 1,200 already receiving meals.

But for many senior feeding programs, local fundraising is relied upon for the bulk of non-government funds. Bake sales, spaghetti dinners, dances, car washes, rummage sales and cycle-a-thons are just some of the ways senior meal organizations generate operating funds.

“Fundraisers are very important to the life of organizations like ours,” Horizons’ Young says. “Not only does it bring in needed money, it also helps to call attention to the program and can help us attract volunteers.”

One of Young’s moneymakers is a Valentine’s Week event called Lunchbox. The organization puts together complete meals consisting of a sandwich and various sides and sells them for $10 to people and organizations to eat or to give as gifts to co-workers or employees. This past year, Lunchbox raised $5,000.

Ironically, one of the best arguments for funding senior feeding programs is one of prevention, MOWAA’s Hollander says.

“We have a solution that can reduce healthcare costs,” she explains. “You can feed a senior a meal a day for a year for the equivalent of one day in the hospital. Already, the Center for Effective Government says that for every dollar invested in Meals On Wheels there’s a $50 savings in Medicaid. That doesn’t even count Medicare.”

Chemung County’s Ike agrees. “If we can only get people to realize the value of our programs we wouldn’t have funding issues,” she says. “I can feed seniors and keep them in their homes for about $2,500 a year. If they were to go to a nursing home, on Medicaid, you’re talking $60,000 plus. We save taxpayer dollars and we need to get people to realize that.”