School tunes in to students’ need for health, nutrition and companionship.

A program designed to get students to eat healthier in a Gainesboro, TN, middle school has resulted in a 10% increase in participation and a 50% increase in the consumption of fruits and vegetables, as students and faculty gobble up composed salads and fruit plates.

The program is called Helping You Get Slim, or HUGS, and features daily cafeteria menu items marked with a logo featuring two panda bears holding a heart between them. The offerings include grab-and-go salads, such as a chef’s salad, pre-packaged fruit and yogurt plates, and on the hot line, such items as the grilled chicken patty and sides of green beans or other vegetables. 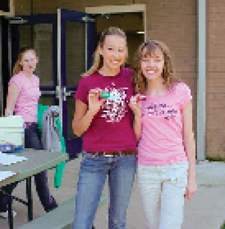 The strongest participation drivers are the salads and fruit plates, reports Brenda Hawkins, nutrition services supervisor for Jackson County School District. “Where we normally have our a la carte items like chips, we are also featuring fresh fruits,” she adds. “It’s the last stop before the cashier and it’s an impulse item to put on their trays. It amazed me how many children are actually taking extra fruit.”

The district kicked off the program in February with BMI testing and blood pressure screening for all middle schoolers, the results of which are sent directly to parents with information on what to do if a child is overweight or at risk of being so.

Eat smart, move more: HUGS is a three-pronged program concentrating on nutrition, exercise and “tuning in,” says Hawkins. “The ‘tuning in’ part is not only about tuning into your own body and eating when you’re hungry, but tuning in to individual differences and accepting people as they are—whether they be overweight or [disabled].”

The middle school has about 600 students in grades four to eight, with about 60% of its students being eligible for free or reduced-price meals, so the Panda items, as Hawkins calls them, fit neatly into the reimbursable meal program. The pre-made salads and the fruit plates, along with a milk, are complete meals in themselves.

"Reimbursable meals are the blood of my program, so I don’t do anything that [negatively] affects those meals,” she explains.

Another important element to the program is exercise. Students can now take 10-minute walks along the school’s quarter-mile walking trail during their 30-minute lunch period. Volunteers, including parents and community members, supervise the walks as students set off for their walks in groups of up to 15 at a time. The school also has about 150 pedometers on hand for students who want to count their steps.

“The lunchroom monitors are the happiest people of them all, because it gets [the children] outside,” she says.
Hawkins believes that the walking element promotes physical as well as  mental well-being and camaraderie among the students. Hawkins noticed that a couple of students who are often seen alone seem to find companionship within their walking groups. “Because you have small groups going out for the walks, I think it forces [students] to be with people they are not accustomed to being with,” she asserts.

The school also tries to encourage students to become more health and nutrition focused by posting weekly “HUGS tips.” Posters in the cafeteria offer up suggestions such as taking the stairs instead of an elevator and taking 10-minute stretch or walk breaks in order to add more activity to your day. Another tip stated: “Reject the idea that beauty comes in only one size!”

“I don’t want to stress weight reduction too much with the middle school students,” Hawkins notes, adding that she is concerned about the number of students in her schools who are at risk or are currently overweight.