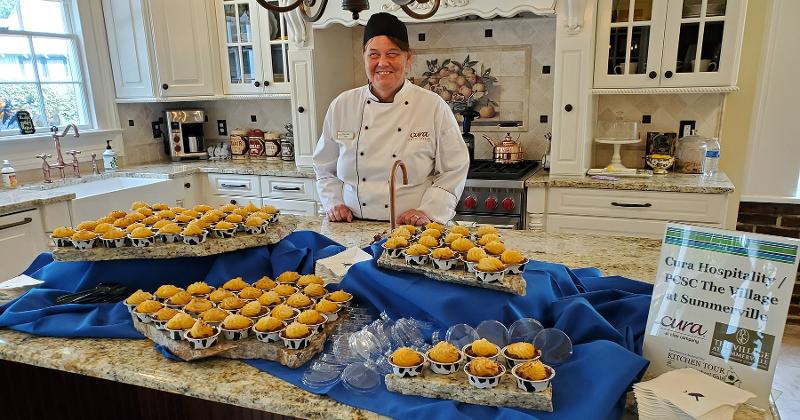 Photograph courtesy of The Village at Summerville

Events and festivals featuring taste-arounds are an increasingly popular way to showcase a community’s culinary talent. Both sides benefit: Restaurants get free publicity, and the event sponsors raise money. But it’s rare to see a chef from hospital or college dining at these events. That’s why Eileen Goos, foodservice director of the Village at Summerville, was thrilled when her operation scored a table at Scrumptious Summerville, a local fundraiser in Summerville, S.C., benefiting victims of child abuse.

“We were the first retirement community to be asked,” says Goos, an honor she attributes to the positive word of mouth about the Village’s in-house catering from residents and guests.

In 2019, the off-premise catering market totaled more than $64 billion, with restaurants capturing about 64% of that business and caterers getting 14%, according to Technomic. Only 3% of sales is attributed to on-site foodservice in healthcare, senior living and other noncommercial operations, the research finds. There’s opportunity there, and the Village at Summerville and other dining facilities are grabbing their share by ramping up their catering programs.

A piece of the action

It starts with the food. The Village, which contracts with Cura Hospitality, makes everything from scratch, and Goos and her executive chef, Mark Hammel, prioritize presentation. “We really enjoy doing intricate appetizers that show off our creativity,” Goos says. “It’s a lot of fun to take a popular entree and turn it into a bite-size treat.” Favorites include a grits cake topped with skewered shrimp, and beef tenderloin crostini topped with caramelized onions and blue cheese.

For a recent Scrumptious Summerville event, Hammel prepared 1,000 samples of beef brisket shepherd’s pie with wild mushrooms and a roasted garlic mashed potato topping. This past year, he offered up a flight of lasagna featuring three different pasta rolls—marinara, seafood and Alfredo. “With our selections, we dispel the myth that [senior dining] serves institutional food,” he says.

“It’s a lot of fun to take a popular entree and turn it into a bite-size treat.”—Eileen Goos

The big draw at BlueCross BlueShield of South Carolina’s catered functions is also food that breaks cafeteria stereotypes, says Lawrence Wright, food services manager for the company’s six locations throughout the state and one in Tennessee. At the company’s Colombia, S.C. headquarters, Wright caters everything from small lunch meetings to retirement parties with 150-plus guests, the latter being a major source of catering revenue. 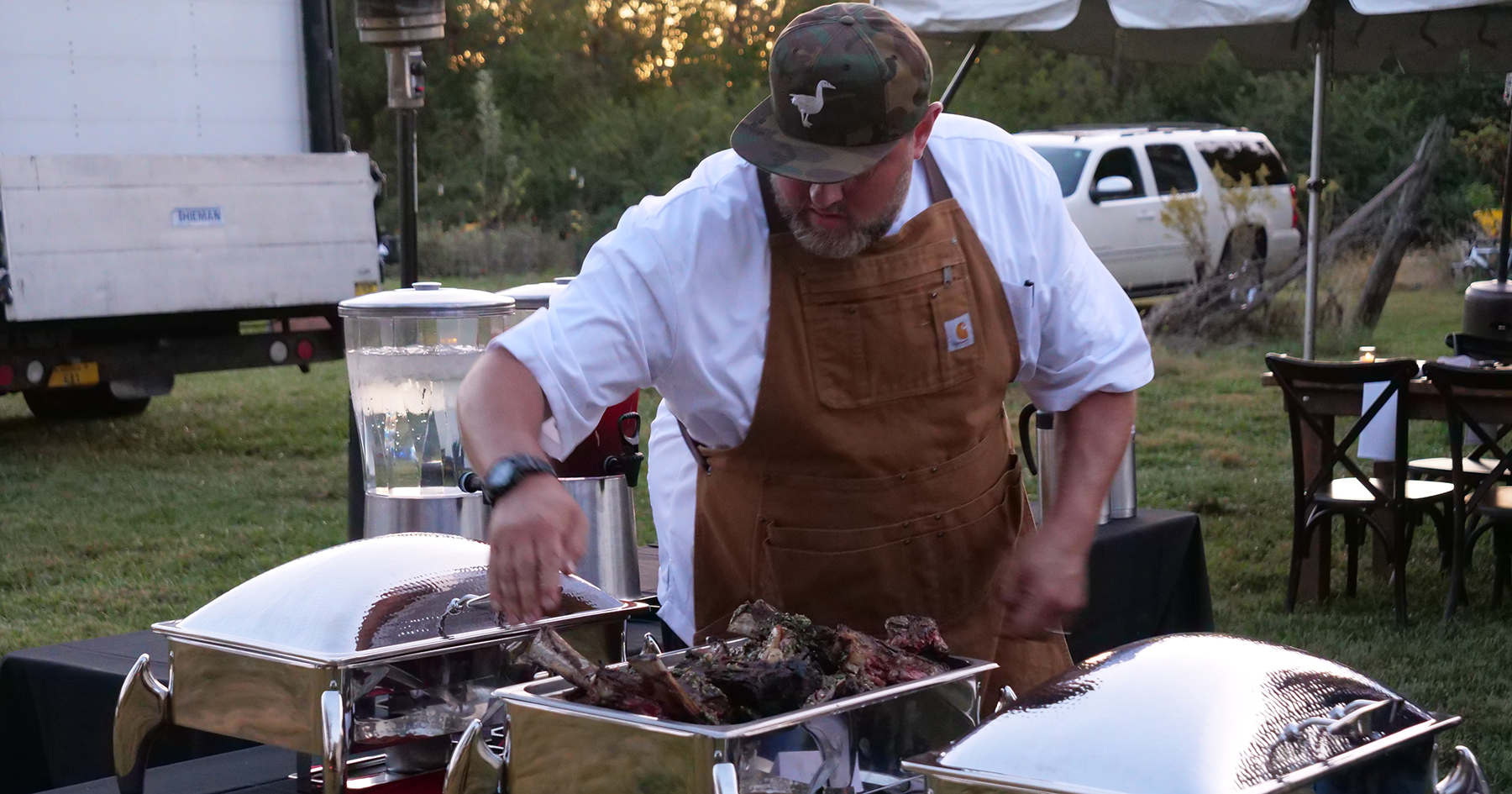 What drives BlueCross BlueShield’s catering business is “extreme flexibility and personalization,” Wright says. “Being able to adapt is key. And since we know our customers (mostly BlueCross employees) so well, we have a unique ability to anticipate what they want and need.”

Playing to your strengths is also important, he says. While Wright can’t compete with the authenticity or price of the whole-hog barbecue from the restaurant down the street, he offers its menu to fill requests for barbecue. Then his team does the setup and service. “Don’t expect to land 100% of catering business,” he says.

On a larger scale, flexibility is key to catering success at Indiana University in Bloomington, Ind., where Executive Chef David Tallent is tasked with hundreds of events a month, ranging from small dinners for the university’s president, barbecues on the campus farm and off-site weddings as far away as Indianapolis. That means creating a multitude of menus and training staff to pivot as the occasion demands. In addition to the back-of-house staff, about 100 students are employed part-time to work front-of-house for catering events.

Community involvement can be the most effective marketing tactic, as the Village at Summerville discovered. Members of the planning committee for Scrumptious Summerville attended a Chamber of Commerce reception for the grand opening of the Village’s new healthcare and rehab center, Goos says, which led to additional exposure: “They couldn’t believe it was catered in-house, and a few months later, they contacted us to participate in the event.”

Chef Tallent, who operated a popular Bloomington restaurant prior to joining IU, brings along his reputation and following as well as a mission to support Indiana farmers and artisans. “Our goal is to locally source at least 50% of the food we serve on campus,” he says. That and his participation in local fundraisers, such as Bloomington’s Soup Bowl, where local potters make bowls and local chefs fill them with signature soups, have raised the profile of IU’s catering program.

Wright also advocates community interaction. He often donates chef-cooked dinners for 12 as an auction prize at fundraisers and takes part in the Sweet Savory Chef’s Competition in Columbia, during which chefs offer up a sweet or savory dish and guests vote on their favorite. “I won five out of six times, competing against area restaurants,” he says. “It not only works as a marketing tool, it promotes goodwill, as the event raises money for charity. BlueCross is very concerned with social equity in the communities it serves.”

Acing the competition: Competing on price and talent

The Village at Summerville has the purchasing power of a major corporation through its partnership with Cura Hospitality, Foodservice Director Eileen Goos says. Plus, she and Executive Chef Mark Hammel prepare all of the food for catering functions, cutting labor costs. “I feel we have a competitive advantage over caterers and restaurants in the area,” Goos says. In-house catering is done at cost with no upcharge, and in 2019, total dollars from catering added up to $37,500.

BlueCross BlueShield of South Carolina’s foodservice is also managed by a large company, Southern Foodservice. “They set our catering prices, and we don’t try to undercut local businesses on price,” Food Services Manager Lawrence Wright says. “Our value lies in our service.” If an outside vendor caters a barbecue lunch or deli platters, Wright’s team provides tables, servingware, cutlery, labor and valuable extra touches. “We can anticipate our guests’ needs,” he says. “For example, after a big breakfast or lunch spread, we know they will want deli containers to carry out leftovers.”

Chef David Tallent of Indiana University is skilled at anticipating what guests are seeking too. The university president always wants fish, for example, and a carving station needs to include vegan options, such as cauliflower shawarma, one of Tallent’s newest creations. “We price around the same level as other local vendors, keeping labor in mind,” he says. “We try not to make the prep too intense, and we offer a range of price points to work within a client’s budget, making suggestions to think outside the box.” Catering has increased from 0.1% to as high as 12% of campus food sales in the four years Tallent has been on board.

5 marketing opportunities in July and August