High-quality food and service have always been a key part of life at Legacy Retirement Communities in Lincoln, Neb. On March 12, 2020, all was as usual: Residents had their choice of elaborate entrees like beef Wellington, lamb, and lobster, served on white tablecloths by formally dressed waitstaff.

The next day at 10 a.m., Legacy’s staff decided to close dining rooms and shift to room service in the burgeoning days of the pandemic.

And to do so immediately. Meaning in six and a half hours.

“Our first concern was what can we do to keep [residents] safe, and there was a real foresight of leadership to make the decision,” says Robert Darrah, Legacy’s director of dining services. “It was the right call, of course—but it was 10 a.m. and we had to figure out how to do this by 4:30. No pressure!”

Darrah immediately placed calls to his executive chefs at Legacy’s three assisted- and independent-living facilities as well as its memory-care unit. Legacy did, in theory, offer room service—but because meals are an important social event for residents, it wasn’t exactly encouraged.

Ramping up to serving 2,100 meals via room service starting on March 13 “took an organized army of chefs,” Darrah says.

The team continued with room service for the following month, and they learned a few lessons quickly on in the transition. They had to scale back the extensive menu a bit, focusing on just a few entrees. And they found the Styrofoam containers they initially used looked cheap, weren’t recyclable and didn’t keep food hot for long.

So they upgraded to recyclable black plastic containers with white lids that looked classier and kept food hot for about half an hour—well worth the upgrade cost of $10,000 per community, Darrah says.

The abrupt shift was difficult not only for the residents, who missed their chats over the nice dinners and white tablecloths, but it was also challenging for the chefs.

“Obviously I knew our chefs are culinarians, but [before COVID] I had never fully embraced exactly all that that meant,” says Greg Joyce, Legacy’s CEO. “They love the process, the preparation, the presentation, and I was aware of what it must feel like to lose that. But I failed to fully appreciate just how much the chefs thrive on the laughter and the conversation [among the residents] that they cultivate every night. It was very hard for them to lose that.” 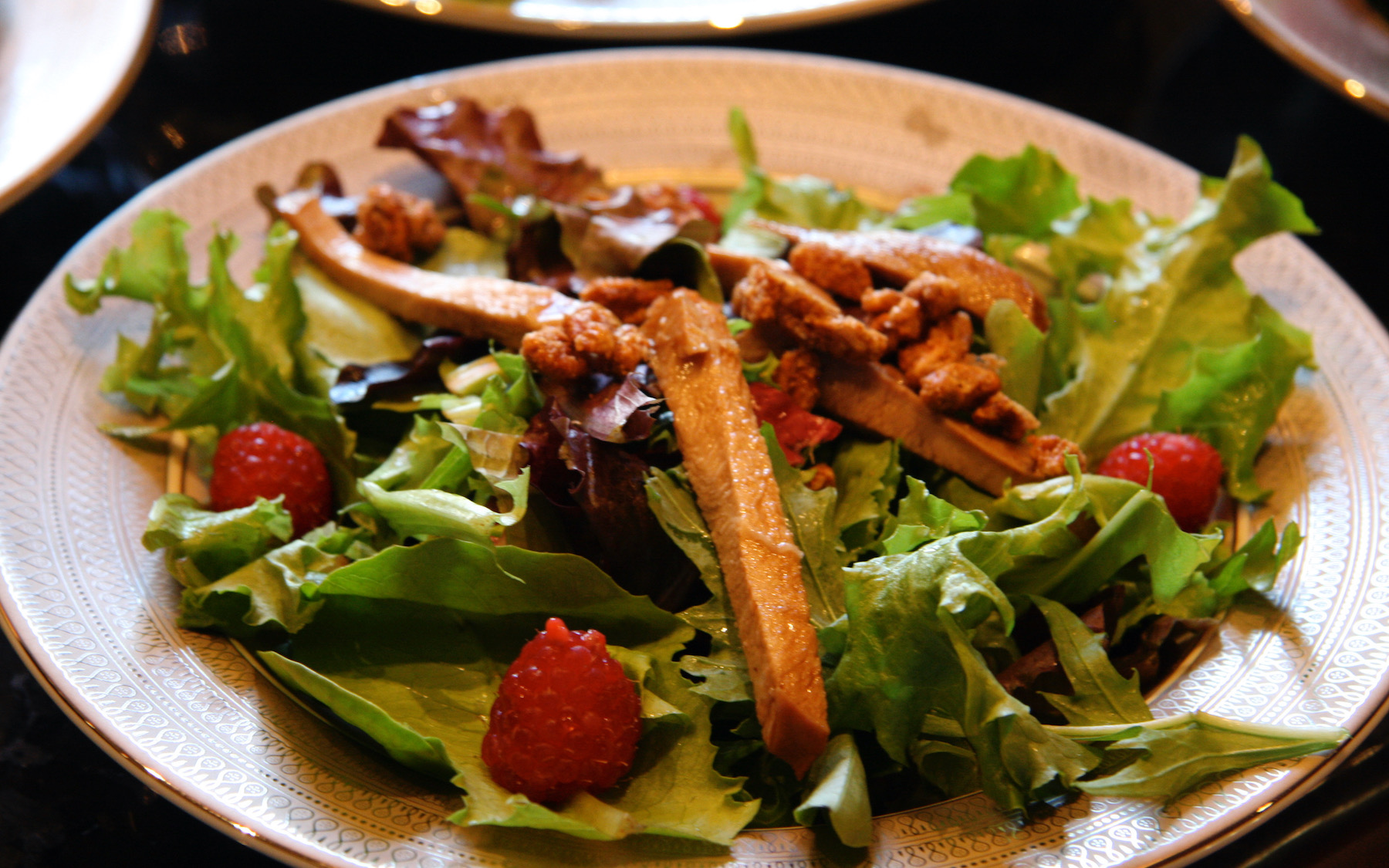 During that room service month, the Legacy foodservice staff—and other teams—did all they could to cultivate conversation and connection. Legacy’s fitness staff even stepped up to wheel around concierge carts at breakfast and lunch, going door-to-door for residents to choose items like juice, specialty coffees, donuts, and fresh fruit to round out their room service orders.

“It’s been a group effort all the way around,” Joyce says. “We were all universal workers here.”

In those early weeks, Darrah and his team were also busy meeting with food suppliers and procuring equipment for the next phase of service: transitioning back to normal. Or at least, a new normal.

He met with executive chefs Paula Saltzman, Vic Saltzman and Keenan Cain, as well as dining staff, and they mapped out a plan to bring the Legacy dining experience back in a COVID-safe manner. They would serve a full menu again, but this time via a service line on each resident floor.

“We said, ‘OK, we have this many servers, this many stations … how can we convert our labor from our dining rooms to each floor?’” Darrah says. “Everyone got new assignments, and it was a strategic operation.”

There are no white tablecloths, of course. Staffers wear masks, gloves and face shields over their uniforms. Residents come to the line, masked and distanced, and select their meals rather than sit down and dine together.

But after a month of service in rooms, that was OK with everyone. “They were tickled to death, the residents—it went over like gangbusters,” Darrah says. “They had been sad they couldn’t eat what they were accustomed to.”

Legacy had to invest in several additional pieces of equipment, like chafing dishes and omelet stations, to bring line service to each floor. They’ve also spent cash on catering for “walk-up restaurants”—food from barbecue, Asian fusion and other spots in Lincoln—to spark excitement for residents and support community businesses.

To support staffers and show appreciation, Legacy also instituted a $2 hourly salary increase for all employees at two periods during the pandemic. 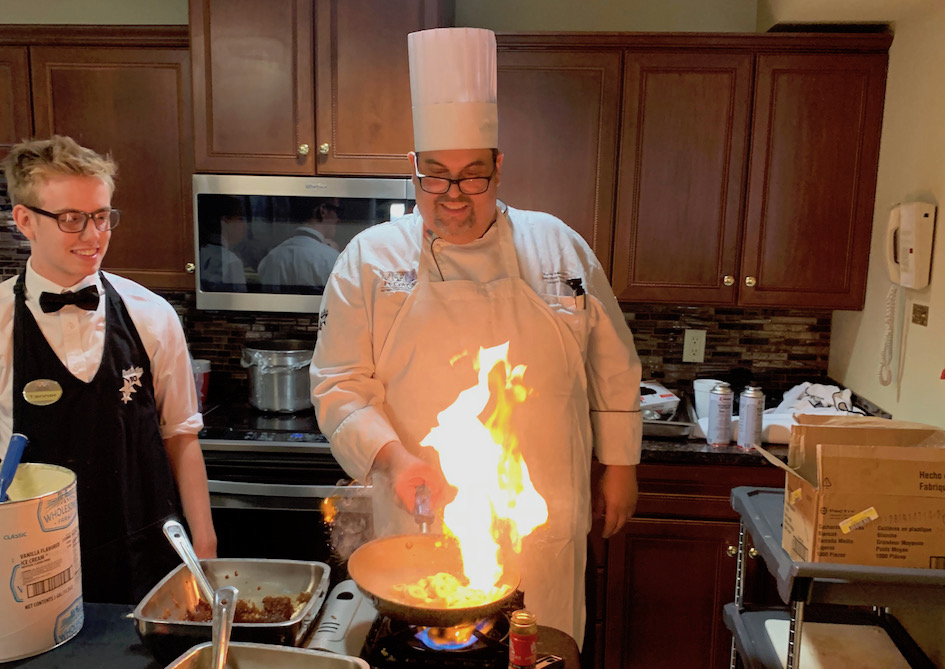 It’s taken effort, money, time and energy across Legacy’s foodservice team and beyond to bring some normalcy back to dining for the communities’ 736 residents.

Yet things still aren’t like they were before COVID: “Serving beef tenderloin and Lyonnaise potatoes with green-topped carrots and bechamel looks different on our china plates than goobered up into a to-go container,” Darrah says.

But everyone from the servers to the chefs to the residents understands it’s about far more than presentation.

“If you love creating an experience through food and drink, and you love to feel like that is received with gratitude, I don’t know that there was ever so great of an opportunity as the present moment,” says Joyce. “Foodservice is the opportunity to touch somebody’s life. Especially now.”

Nominate an FSO of the Month
coronavirus