About six years had passed since the kitchen inside ProMedica Toledo Hospital in Toledo, Ohio, had seen any sort of update. Outfitted with old equipment and located far from patient rooms, staff often struggled to deliver meals in a timely manner, especially because the hospital allows patients to request meals at any time of day.

“Our main goal is to get our patients a hot meal as quick as possible, and logistically, the way that it was laid out, it was difficult at times for us get across campus to deliver,” says Patient Services Manager Scott Linden.

That all began to change two years ago, when the hospital broke ground on its Generations of Care Tower, a new space in the heart of the hospital campus that is also home to a cafe and kitchen managed by Sodexo.

The cafe and kitchen, which debuted this summer, offer guests fresh, exciting menu items in a shorter time frame. 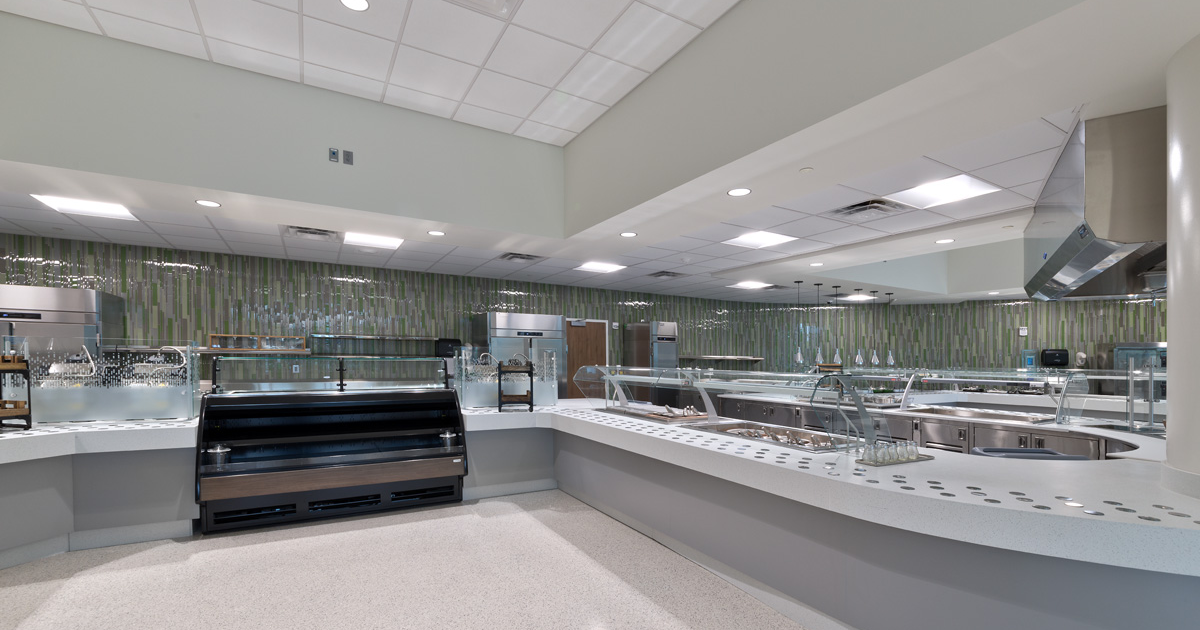 The foodservice team worked with two design firms to plan the space, which consists of a cafe on one floor and a kitchen underneath. One of its main goals was to create a back-of-house flow that ensures line cooks can be as efficient as possible and get meals out the door fast.

“It's kind of like a dance, you know, [cooks on the line] need to be able to sort of move behind each other,” says Senior Executive Chef Hannah Robertson, noting that the flow is “very, very similar [to] that you see in a restaurant.”

The new kitchen is set up to minimize the number of times staff have to move around each other to grab ingredients needed to fulfill orders. “Everything is within hand’s reach,” Linden says. “Where we may have taken 15 or 20 steps, now, you only have to take two or three each.” 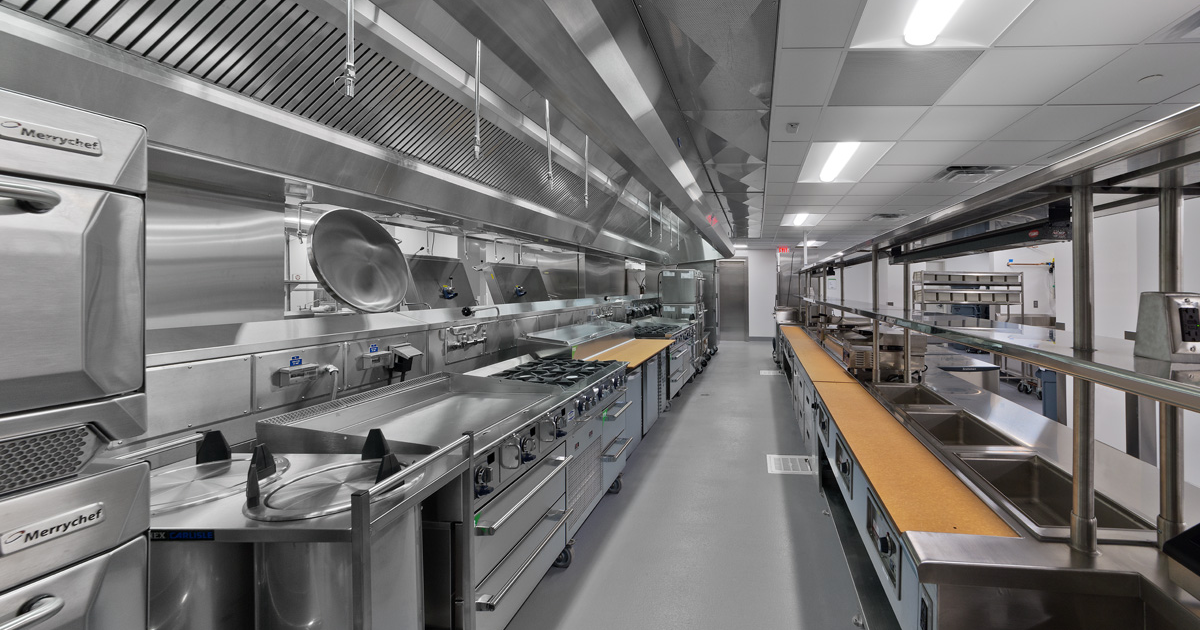 While the reduction in steps may seem small, Robertson says it pays off when taking into account how many meals staff serve daily. “Each step shaves off seconds over a day, but when you’re serving that many meals it is huge,” she says.

Building a better back and front of house

The foodservice team was able to purchase new equipment for the space, which Linden and Robertson say they are excited to play around with. Here’s a look at some of those just-added items.

The cafe includes panini presses that utilize both induction and microwave heat, each serving a different purpose. “The induction cooks the outside of the panini sandwiches while putting nice grill marks on the bread,” Linden says. “The microwave heat cooks the sandwich all the way through on the inside evenly.”

In addition to making the cooking process more efficient, Linden says that the dual heat will provide better quality sandwiches for guests. “These two sources of heating help speed up the process in which our paninis cook and will ensure they are consistently heated all the way through every time to ensure our customers get the perfect bite.” 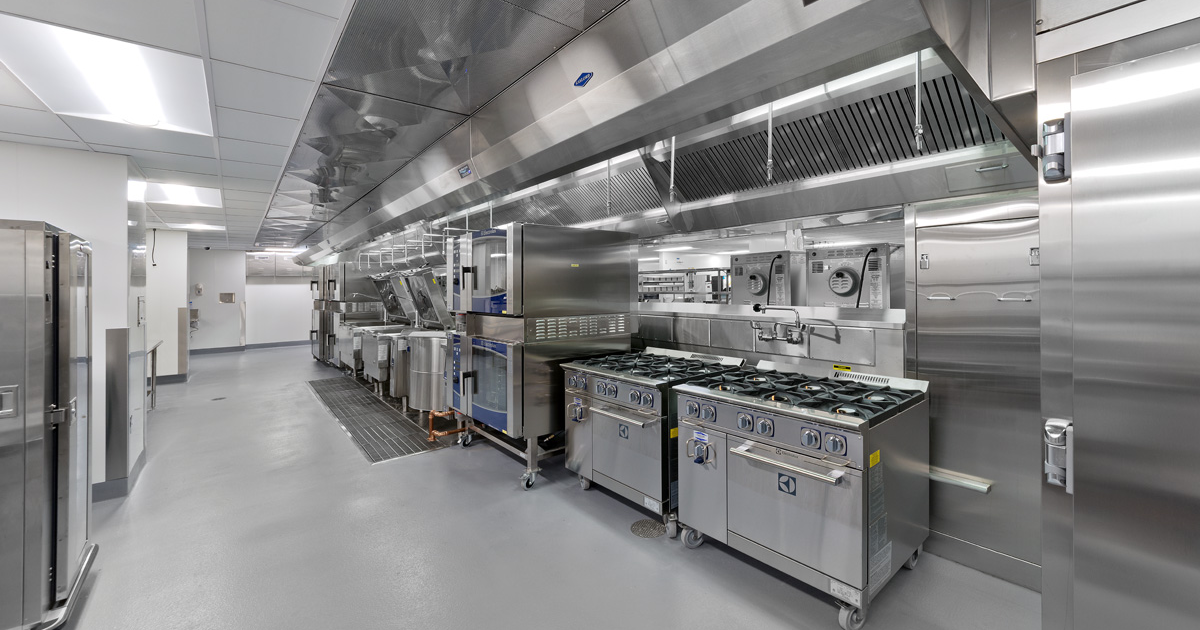 Along with the panini presses, the cafe upstairs also has several induction burners to allow display cooking and meals cooked to order.

Thanks to the cafe’s new wood-fired oven, staff will be able to offer a variety of rotating specials such as calzones, whole pizzas, pizza by the slice and certain roasted entrees. Along with savory options, the team is hoping to use the oven to expand the cafe’s dessert menu as well.

“We are also looking at the possibility of doing some desserts such as fresh-baked cookies and cinnamon rolls,” Linden says. “The possibilities are endless.”

Combi ovens were high on the team’s wish list for new equipment. The selected ovens are outfitted with technology that allows the food inside to cook at different temperatures during different stages. “That’s really going to shave off multiple minutes in terms of the cook time,” says Robertson. “It's going be a lot faster and a lot more effective.”

Generations Tower is also equipped with two elevators dedicated to transporting food between the kitchen and cafe and three elevators for patient meal delivery. These will allow food to move without causing a disruption to customers or hospital staff, Linden says. 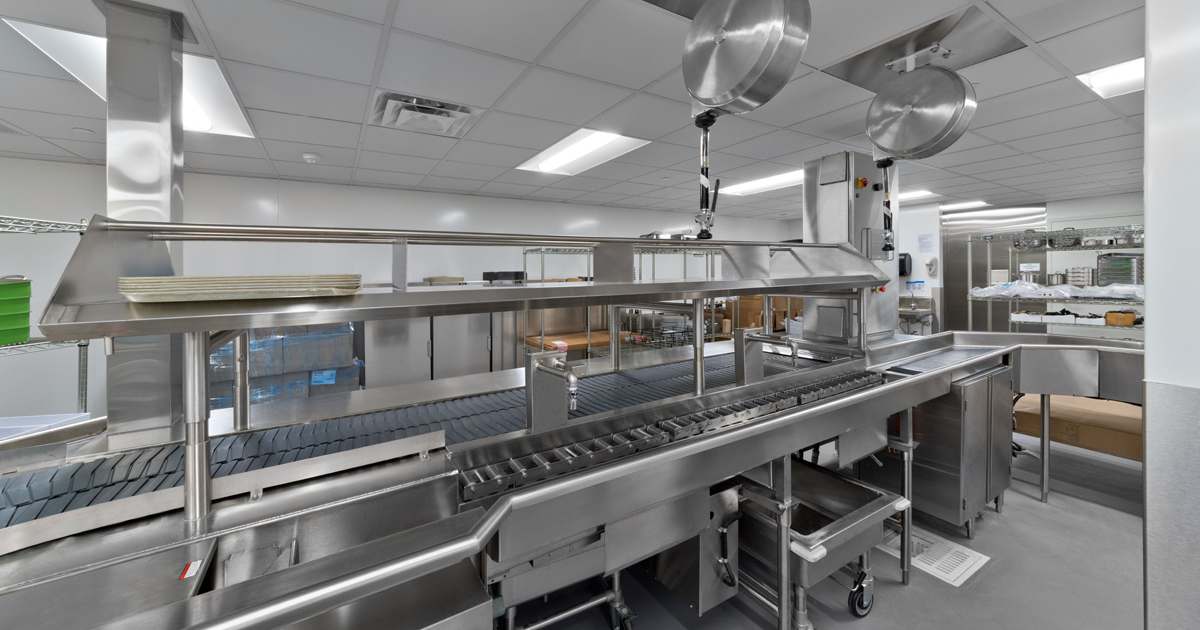 The elevators for patient meals go directly behind the patient units so as not to disturb anyone in the waiting rooms, and they also provide a “direct route” to each building on campus, Linden says. “This change will easily be the single most important factor to our excellent patient satisfaction as it gives us a direct route to our patients to ensure they receive a hot, quality meal quickly.”

Food safety continues to remain a top priority for the team in the new space. The kitchen is home to a large blast chiller to allow hot food items to be brought down to a safe chill temperature quickly.

The new kitchen is outfitted with a cart wash in the dish room as another way to help maintain food safety. “Every cart that we use for delivery to patients, as well as to store food on, we can clean and sanitize after every use,” Linden says.