Raising patient satisfaction scores isn’t complicated. Keeping them up is.

It has been a decade since Carolyn Hackworth, RD, LD, arrived at 375-bed St. Bernards Medical Center in Jonesboro, AR, to become  director of nutrition services. Back then, Press Ganey scores had consistently hovered around the 70th percentile for nutrition services. Within six months of Hackworth’s arrival, she implemented innumerable changes and scores for the department soared to the 90th percentile; they’ve been circling round the 98th percentile ever since and patient services are a top priority. 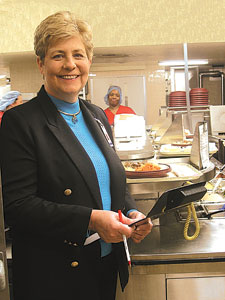 Hackworth credits this consistent striving for excellence to a staff that was then—and is now—determined to succeed. In no small measure it’s also attributable to the more than 100 changes—including taking over tray delivery from nursing—the team effected a decade ago that are still in place. To ensure that service is truly customer-friendly, the scripting of roles for each member of the team who interfaces with patients is absolutely central to success.

Knowing what to say: “I believe in scripts and I tell [staff] exactly what to say from the moment they walk into the patient’s room with a smile on their face,” she asserts. “They walk in the door and say, ‘Lunch! Will you be needing help eating, Mr. Jones? Can I call your nurse for you?’ And I tell my staff never to say ‘It’s not my job!’ The perception was that it was our job. You have to communicate with the patients, otherwise they don’t know what your job is.

“They’ll ask, ‘Honey, can you raise my bed?’ You say: ‘They don’t let me do that but I’ll be glad to get you help,’ and we ring the nurse’s bell. We lost no efficiency by being nice. Nurses like it, too, because this way they know who needs help.”

Leaving little to chance, Hackworth is a firm believer that you “inspect what you expect” and knows that her managers and team leaders are up on the patient floors, popping into rooms to make sure the script is being adhered to. Patients gain a clearer picture of the foodservice staffs’ role from this exercise, and servers are able to diplomatically avoid questions that slow them down so trays yet to be delivered don’t lose temperature.

Living room: St. Bernards offers room service but without the computerization or trained executive chefs in the spotlight as in other healthcare facilities. Here, it’s done simply by talking to the patients. “I always get kind of tickled when I see how many chefs other facilities have hired for room service,” she says. “In Arkansas, half our patients are elderly—do you think they want chicken cordon bleu? They want comfort food and when you’re sick it’s also not the time to make them eat healthy foods.”

Hackworth firmly believes there’s a time and place for nutrition education. “In our pediatric unit, the menu is a blank piece of paper with lines on it,” she says. “My staff wrote this ‘menu’ and the kids can choose [i.e., write in] vending items, sandwiches, plus anything from the whole cafeteria menu. Then, there’s the ‘Everything else available in the kitchen’ category. So you could see a tray going to a kid’s room with a chili dog, a Snickers bar, a bottle of Yoo-hoo and a banana because that’s what he wanted to eat! He’s sick, he’s alone and it’s not the time to teach him to eat broccoli.

“There has to be a better environment in which to teach nutrition. Instead, I get the calories [i.e., nourishment] into my kids.”

Clear and easy: Patients have a clear and easily accessible way to order whatever they want, even though the program isn’t labeled “room service.” A 5-by-7-inch card on the bulletin board in each room directs them to call the hotline for help with their menu selection. The card proclaims.“Have problems marking your menu? Other foods we need to provide? You can have anything your diet order will allow.”

In fact, few patients look for more than what’s on the patient menu, a very simple seven-day cycle that was rewritten 10 years ago as one of Hackworth’s many changes. Breakfast is the same daily menu with lots of choices including two hot cereals and five cold varieties. At lunchtime, the alternate choice is always fried chicken and for dinner it’s always roast beef. Since it’s the rare patient who wants something expensive, meal costs have actually decreased from $4 per patient meal a decade ago to $3.23 today.

Other gains: Productivity has also improved, Hackworth notes, to 5.4 minutes per meal; she compares that to the 25th percentile of HFM’s Benchmarking Express tool: 6.6 minutes per meal. “That wasn’t part of the original goal but it happened,” she notes. “None of the changes we made was expensive but some have incidentally saved time or money.”

Hackworth proudly admits that her employees care enough to make the changes work. They’re working smarter, complying with as well as suggesting improvements to the system. Tray assembly has been 100% accurate for the past four months (at presstime), with four trays completed per minute. “Even though my staff was skeptical at first, we accomplished this by slowing down the tray line,” Hackworth notes. “I say: Quality is more important than quantity.”

New mission: Prior to arriving at St. Bernards, Hackworth’s passion was cafeteria and retail operations—but there’s a different mission here at this 105-year-old Catholic hospital. It was founded by the Olivetan Benedictine sisters from Switzerland who established a convent and began to care for the victims of a malaria epidemic then gripping Arkansas.

Their patient-centered focus continues to this day. “I don’t get ‘fussed at’ for budget—there’s not the concentration on just the bottom line,” Hackworth says. “We raised the quality and the costs went down.”

Hackworth decided that getting the Press Ganey scores up—and keeping them up—would be her legacy. Fortunately, she’s had a team of 62 FTEs who have been just as determined. “They really bought into it,” she notes. “I may have started it, but they’ve kept the gas in the machine.”