Sue Mitchell, director of nutrition services at Bartow County (Ga.) School System, has created, via automation, group purchasing and other innovations, a self-supporting enterprise. She is also fresh off completing her first year on USDA's NuMenu program. 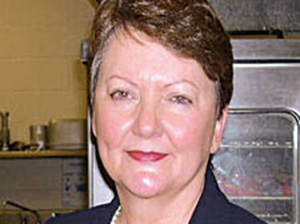 "Eat healthy, play hard," is not only the new motto of the Bartow County School System's department of nutrition services, it could be the mantra of its feisty dynamo of a director, Sue Mitchell. You'd just have to replace "play" with "work" and it's a perfect fit. Actually, the motto it replaced, "Nutrition Services, linking nutrition to lifelong learning," also suits her just fine.

Originally a high school home economics teacher, Mitchell has never stopped learning, be it assimilating the latest nutrition discoveries in order to keep students, teachers, administrators and the community abreast of the news; or mastering the newest computer technologies to keep her district on the cutting edge, or honing the business skills needed to run her department as a viable, self-supporting enterprise.

Located in Cartersville, Ga., about 60 miles north of Atlanta in the foothills of the Appalachian Mountains, the Bartow County School System, encompassing 20 schools, serves approximately 12,500 students for lunch each day as well as about 3,900 at breakfast. Sites include one pre-K center, 12 elementary, four middle and three high schools. In 1970 Mitchell started out teaching vocational home economics in her native Oklahoma but was quickly corralled to become director of nutrition services for the Miami (Okla.) Public Schools. In 1980 she migrated to Oklahoma City, where she became child nutrition director of that public school system, which is the largest in the state.

With her move to Georgia in 1993, she picked up the reins as director of nutrition services for the Cobb County Public Schools (part of the Metro Atlanta district). Then, with the new millennium looming large, she and her husband Bill decided to move again in order to improve the quality of their lives and escape from Atlanta's hustle and bustle, not to mention the typical two-hour wait for a table in a restaurant.

Safer transport: When Mitchell assumed her new job in June 1999, she found the Bartow system was "in pretty good shape," but she has worked diligently over the past seven years to make it even better. "The very first thing I did, realizing the need for safety and security in our central distribution system, was to get all our trucks refrigerated," she recalls. "All our sites have full production kitchens, but all our food, except for fresh produce, milk and bread, is delivered to our central distribution warehouse, then trucked to the individual schools. I had to be beyond a doubt sure our food was handled in a safe and secure manner."

Total automation: Next on her agenda was the daunting project of automating all possible processes, including cashiering, warehousing, central distribution, the procurement processes at the schools and the production of claims to the state, as well as food production. "We automated the entire foodservice program system-wide," she explains. "We have significantly reduced the paper shuffling of our cafe managers, and that's a huge time and labor savings. The dollars and cents savings comes from the efficient use of inventory. With as-needed inventory, we have money earning interest in the bank instead of food aging in our store rooms."

Although the central warehouse was in operation when Mitchell arrived on the job, it was not being as fully utilized as it is today, nor was there such an efficient and systematic approach, she says.

Today's automated food production system carries out all the necessary calculations for the production staff, but putting the system in place was quite the laborious task. "Recipes (i.e., production tickets) are printed out and any leftovers are noted," she says. "The manager has a complete production record of what was used or not, and the system updates her inventory. This saves a great deal of time and allows for the products we produce to be really high quality. We test all of our recipes in the system before they're approved for use and our nutrient analysis is all conducted within the system."

NuMenu success: This past school year (2005-2006) was the first in which Bartow County used the USDA Nutrient Standard and Menu Pattern, or NuMenus, and Mitchell is thrilled with the results. "We used it very successfully and our meal sales did not decrease at all; district-wide we had 83% to 84% daily lunch participation," she reports. "NuMenus allows us to put more of our food budget into fresh fruits and vegetables and beautiful whole-grain breads. We also introduced our Mega Salads, these are entree salads that are a complete meal with the addition of bread and milk."

The most challenging aspect of automating food production was building the inventory database, since all specifications and nutrient analysis on every food item had to be entered. (Overall, the department has about 160 employees including those in warehouse & distribution, administrative plus school-based employees.) She recalls painstakingly weighing individual potato puffs and cups of mozzarella cheese so the nutrient analysis as well as the production records would be correct based on accurate baseline weights for each item, and every item was weighed three times!

GPO clout: Procuring the nutritious products she needs to fit NuMenu parameters, and at an affordable price, has forced Mitchell to become an activist. She spearheaded the formation of the Georgia Education Cooperative by encouraging the foodservice directors throughout the northwestern corner of the state to form their own group purchasing organization. Together, members of this fledgling GPO, or "cooperative," as Mitchell calls it, represent 20 school systems serving more than a quarter of a million meals a day, so it truly has clout with the supplier community.

"When I was in the larger system in Cobb County, I spoke with the milk company about reducing the fat content and they began provide 1/2% fat chocolate milk," she says. "Here, about 25 miles down the road, the same milk company couldn't do it. But with these 20 directors, we met with the company and the next school year they provided the product."

Management internship: Finding qualified managers is a challenge faced by directors in almost all sectors of business, but Mitchell has managed to keep her roster full, with trained personnel who really want the job. By initiating a management internship program within her system she now has more applicants than job openings. "We notify the schools and any individuals already on our staff can apply," she points out. "We use an evaluation instrument that tests their knowledge of math and basic algebra. It also tests their ability to take written direction and to communicate in writing; plus, there's a pretty rigorous interview process. Once they're selected, they continue to work at their schools while attending training classes including ServSafe and 180 hours in management and food handling."

She finds it "pretty amazing" that so many apply. However, in addition to the fact that being chosen to enter the internship program is a positive step in furthering their careers, applicants know from the outset they're working for a department that cares. "We have increased salaries over the last several years, it's about $8.60 an hour to start, and the benefits are also good," Mitchell says. "But I think it's more than that; the people who work in school nutrition in Bartow County Schools have a real love for what we do, and we talk about it a lot."

This year the entire department was proud that it passed the Coordinated Review Effort (CRE) and the School Meal Initiative (SMI) with flying colors. "This is a combined review mandated by the federal government and coordinated by the state," Mitchell explains. "Every school system operating the USDA School Breakfast and Lunch Programs is subject to a CRE and SMI once in every five-year period. We passed at a very high level even though it was our first year to use Nutrient Standard Menu Planning."

Mandate met: On the heels of this achievement, the department has had its wellness policy recommendations adopted by the Bartow County School System Board of Education, without any changes. Every district across the country has been racing the deadline to create such a policy prior to the start of the 2006-2007 school year and Mitchell's team, meeting on five separate occasions, completed its recommended policy, submitted it and received approval by April.

Holding meal costs steady: Financial and budget administration is certainly an important part of Mitchell's job. As she says, "If you're not generating enough money to cover your cost, you're doing your district a disservice."

It's clear from the figures that the district has cause to be pleased. "Here, we have picked up numerous costs that were previously paid by the General Fund. We are now totally self-supporting! My proposed budget for 2006-2007 is $6,514,000; that's keeping our meal price the same as last year but increasing wages by 4%, and always serving very high quality food. I believe you must have that as well as great customer service. Without that you won't have the revenue to run your business."