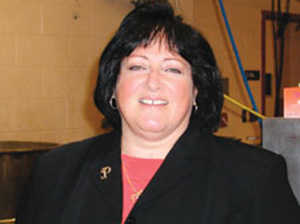 Over the past six years since she's been foodservice director of VISN 3, her budget of approx. $3 million hasn't increased although patient count certainly has. Meanwhile, to meet the needs of a more diversified patient base, she's managed to add more variety to the menu while moving service points closer to the patient. And, after 32 years on the job (Filgate began her career as a dietetic intern in the Bronx VA facility), she continues to handle her responsibilities with enthusiasm, creativity and an eye to meeting the next challenge.

Planning the moves: "In 1972, if someone had said I'd be foodservice director today, I would have said they're crazy because I love the science—the clinical end of nutrition," Filgate asserts. "I really backed my way into management since I like running things and the planning aspect."

The St. Albans centralized commissary utilizes several methods of preparation in addition to cook-chill. Chicken, for example, is first baked or roasted in the oven, then blast-frozen. Gravies, stews, hot cereals and soups are prepared in kettles, pumped into bags, vacuum-sealed then tumble-chilled. And roasts—including turkey, pork and beef—scrambled eggs and rice are cook-chilled. (Product in a bag is placed into a cook tank for cooking and chilling, then stored in the food bank.)

More than a decade ago, Filgate had proposed a shift to an advanced delivery system utilizing cold, chilled or convenience foods plated ahead. Food would be plated cold, then heated in a retherm unit, thus allowing the cook staff to always be able to work a meal ahead. "As a group, our network of dietitians found that the pellet system [same as heat on demand] wasn't working well enough," she explains. "That prompted us to develop and publish a white paper on foodservice equipment that was needed at the time. Then we went to an advanced delivery system with convection retherm."

However, that delivery system has not solved all the problems. So now, Filgate and other network dietitians are looking at other options to revitalize the system to meet current and future needs. "One of my sites will pilot a spoken menu using service carts so we can reduce the number of wasted trays," she says.

"As we have found, there are some inherent problems with advanced delivery. You're always faced with a tray line so there's not a lot of flexibility. Some acute care patients may be missing trays because of the high incidence of recurrent diet changes and a subsequent long wait for retherm."

In VA hospitals, as in the general population, the elderly are living longer. On the other hand, the ranks of World War I and II veterans are decreasing rapidly so there are, proportionately, more younger veterans, and more females—those who served in Korea, Vietnam and Desert Storm—to be served. In addition, the service spectrum is a broad one, ranging from acute care, nursing home (both older and younger infirm in housed units) and long-term psychiatric to domiciliary (i.e., medical homeless rehab) and transitional housing for the homeless.

Banishing boredom: "Since the length of stay ranges from 24 hours to almost a lifetime, we run a three-week menu cycle without repeats," Filgate points out. "Plus, we serve a lot of 'conservative' gentlemen whose preference is for meat and potatoes. A mole sauce, menued as part of a Cinco de Mayo meal, was not very popular, but when we did a riblet for Chinese New Year, they loved it."

Menu planning receives a lot of time and attention and is truly a group effort, with input sought from all site managers as well as from other staff members. The recent addition of a quesadilla casserole to the menu cycle is a case in point. The younger population "loves it," and it meets most special diet parameters.

When all cooking produced at the New York Harbor facility in Brooklyn was transferred to the St. Albans kitchen six years ago, Filgate was ready for the increased production, but just one year earlier it wouldn't have been possible. The $10 million federally funded kitchen project had been stalled during a decade of design and construction problems.

Diving right in: "When I walked in, in 1997, the original design person had retired and there was a half-finished kitchen. Since I'm a registered dietitian with a master's degree in nutrition from New York University, I started right in without a staff, negotiated with the union and got a minimal staff, a staff manager, plus Mary Cunningham, our program support assistant. It was a bare-bones operation without any office space. I started designing and sought help for drawing up our HACCP plan from the National Cattleman's Beef Assn. and also contacted the USDA, which came in and offered pointers on controlling space and also shared meat preparation ideas."

Following site visits to several of the country's largest cook-chill facilities, Filgate and her staff felt they were equal to the task. Now, to handle daily production and delivery of 10,000 meals, the commissary staff has grown to include five drivers and 10 cooks plus three team leaders. Five FTEs comprise the ingredient control unit to handle receiving, measuring and inventory, and another five FTEs serve as the sanitation team. An additional five VA patients who wish to learn foodservice skills participate in a six-month rotation as part of a Compensated Work Therapy (CWT) program.

Her immediate staff now includes three specialty dietitians: one full-time quality management dietitian; one full-time test kitchen dietitian who tests recipes and items at point of service, and follows up on complaints; and a full-time computer dietitian. "We have our own Web page on the VA intranet, complete with diet manual and ordering forms," she adds.

"We're also in the process of bringing in a software program to link us directly with each of the facilities. The current VA computer system only allows us to work with one facility at a time and doesn't recognize a multi-unit cook-chill operation."

Maximizing efficiencies: Filgate figures she needs another two to three years to get all systems in place in order to maximize computer efficiencies. Forecasting skills have to be learned; some facilities in the system must follow stricter guidelines because of the greater acuity of patients; and the ins and outs of menuing (including nutritional values) are still being worked out. But budgeting is well under Filgate's control.

"Our approx. $3 million budget has not increased over six years although there's been a food cost cut of about 5%," she points out. "We're actually working on a 0% budget. When we come up for budget review each year, we project 'no growth' even though we're taking on more patients; plus there's been a 2% to 3% inflationary trend in the marketplace. Even so, we've been able to keep our budget down."