Some say this is the "me" generation and it's all about "me." Although Paul Hubbard, associate director of foodservice operations at 527-bed Stony Brook (NY) University Hospital on Long Island, has helped place his facility on the cutting edge of what's new and exciting in healthcare foodservice today, "me" isn't part of his lexicon. 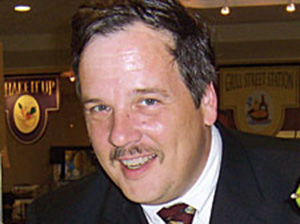 For Hubbard, it's all about "we" and "us" and facilitating the work of a team of 185 dedicated department employees who, over the past six years, have transformed a 26-year-old facility, and a department that was serving 1.8 million meals annually (including retail, patient and catering areas), into a modern one on target to produce 2.1 million meals by year's end.

During that same time period, revenue has grown from $3.3 million in 2000 to $5.6 million today. Perhaps most impressive, since it occurred amidst a $7-million capital improvement project, patient satisfaction scores, as reported by Press Ganey, zoomed from "unacceptable" (Hubbard's word) to between the 95th and 99th percentiles today, when compared with other similar Long Island hospitals.

Shifting gears: Hubbard, whose background includes formal chef training, spent many years working the marathon days often required in casual dining and mom-and-pop restaurants prior to switching to healthcare foodservice. He was seeking regular Monday-through-Friday hours with weekends free to antique and garden with his wife (and gain quality time with their six grandchildren).

Based on his experience working in contracted acute care and assisted-living facilities, he was hired to join the Stony Brook staff as assistant director seven years ago when the department was under a management contract. He was originally tasked with overseeing purchasing and production, but within his first year on the job the facility switched to self-operation, his title changed to associate director, and his duties expanded to encompass all retail operations and catering.

"Currently, I oversee purchasing, receiving, retail, catering, information systems and security for the department, and I've acted as construction liaison for all capital improvement projects," Hubbard says, using the "I" word only out of necessity. "I tend to be a facilitator and assist with getting certain functions done. Going self-op changed how we did business from both a budgetary and organizational standpoint. Without the contractor, we had to develop our own hiring practices, menus, programs, etc. It saved us a ton of money, $300,000 in labor costs and the management fee,within the first year."

Aiming to effect a seamless transition to self-op (overnight from June 30 to July 1), Hubbard and other key administrators busily completed the writing of schedules, recipe manuals, employee orientation guides and many other behind-the-scenes projects.

Next steps: With the transition accomplished, modernization of the facility was next on administration's agenda. This included the physical plant, production facility, trayline and retail operations (then serving approximately 3,200 customers), along with the requisite technology. It was all part of a much larger, hospital-wide capital improvement plan worth about $450 million.

"We were moving from cook-chill to cook-serve," Hubbard explains. "The hospital hired a consultant to plan all phases of the project. Of course, the plan then needed to be reviewed, modified, funded and phased-in over the next four years. Even though this included gutting the entire facility, we still had to feed the patients."

Throughout the project Hubbard acted as construction liaison. The first year saw the inauguration of the new warewashing system (February 2002) followed by patient feeding, a new bakery, hot production, receiving and stores, all completed by November of that year. "As a member of the team from food and nutrition, I met with others including the consultant, the engineering team, plus end users," he recalls. "There were weekly and bi-weekly meetings to discuss when to do, how to do, and how much needed to be spent. Then there was the job of procuring equipment and planning the phased implementation. So my role was to help the team with the coordination of this phase of the project."

During 2003-'04, renovations to the retail areas were undertaken and completed in line with administration's mandate to improve menu variety, speed customer throughput and increase seating capacity.

With approximately 4,500 employees working in the hospital, the 300 seats at the former Windows Restaurant were clearly inadequate. "We immediately added 220 seats by enclosing an outdoor patio," Hubbard explains. "This was pivotal (to our ability to serve) during the renovation as we took other areas under construction," he says.

-Skyline Deli, which opened in March 2004 to support customers during the renovation eliminating Windows. "It was intended as a temporary location, but it was so successful with its New York,style deli menu that it's now a permanent fixture," Hubbard says of the 640-square foot former vending location.

-Bookends, a satellite unit situated between the hospital and med school.

Data sharing: Through all retail units, modernization of the cash register system has positively impacted other areas that fall under Hubbard's purview. UPC-coded products can be scanned through the touch-screen registers, making transactions much faster and data collection much easier. "We can share the data from retail to some of our other computer systems," he points out.

"Production, for example, knows how many orders of chicken Marsala were sold today," he continues. "Those numbers are used to tell us what we need to purchase, (more than 3,000 items are kept in inventory) or prepare, and allows us to refine our menus almost instantaneously."

Faster customer throughput was instantly obvious,maybe too obvious at first. "I remember standing at the (Marketplace) entrance a few days after the opening and hearing the then-coo say in dismay, 'It looks empty!'" Hubbard says. "Meanwhile, every day we were breaking records set the previous day since our systems were allowing customers to move through without waiting. Plus, I had an e-mail within hours of closing each day showing that we were pushing more customers through faster and happier than ever before. It reinforced our belief that a good design, layout and menu mix would speed customers through the stations."

Hubbard can take satisfaction in knowing that he had a hand in making it happen since he spearheaded the team in its "request for information" task, and in researching the companies and equipment that most closely offered what they wanted. When prompted, he'll point to the Lucite doors on all walk-ins, the sections of walls covered in diamond plate, or perhaps the epoxy floors chosen to reduce accidents. These items, as well as almost every piece of equipment, passed through his hands, from the writing of the purchase order to working with construction crews.

Credit where due: Hubbard is quick to stress, however, the "team" nature of his department and the individual contributions of staff to the collective end-result and success. "It's a whole litany of things," he reflects. "There are so many important members of this team from bakers and porters to the management level. But I couldn't have done anything without a savvy, passionate leader such as Suzette Smookler, administrator for food and nutritional services; or Kathleen Werther, director of nutritional services, who is in charge of our room service program that debuted May 2; or our executive chef Eric Ingoglia."

"Then there's Kristen Berry, assistant director of retail services. She makes me look good," he continues. "She reports to me and is pivotal in the implementation of programs. In fact, retail and catering would not be as successful without Kristen. In 2002 we had 40,000 to 50,000 catering customers, but in 2006 it's between 90,000 and 100,000. We're on the cutting edge, offering everything from chocolate dipping fountains to pan-seared tuna. We are only as good as every single employee who works with us. We will keep growing again and again because of these very important people."