The traits that make Pattie Malloy a successful operator are the very ones that make it difficult to find out from her just what it is that she does so well, since she never blows her own horn. 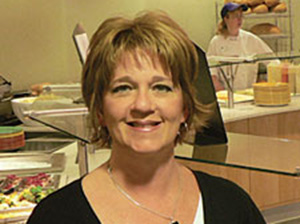 Malloy is general manager for Parkhurst Dining Services at PNC Bank's headquarters in Pittsburgh. She's a communications specialist by education, "people person" by nature and a lover of food, all rolled into one. And if helping to win new accounts while generating interest in the cafe where she's based and in three other PNC sites she helps oversee, and keeping guests in all locations coming back for more, are all part of the game, then she's the consummate team player.

She joined the contractor five years ago following a 21-year stint with Select Restaurants (formerly Stouffer's), where she began her foodservice career during her freshman year of college. "I studied communications management but I always had a passion for food and guest services," Malloy says.

Initially, she served as Parkhurst's director of dining services at Robert Morris University in Pittsburgh before her move to the PNC Firstside account three years ago. Then, last August, Parkhurst was awarded PNC headquarters plus its loan center, and Malloy became general manager of the headquarters account.

PNC Firstside, PNC Loan Center and PNC Cafe 36, all similar cafeteria operations, are within walking distance of headquarters and have separate directors who report to Malloy. Her team includes chef Dave DeCollo, who has been with Parkhurst for about 10 years, and Bryan Marince, vice president of the western region.

"I help with marketing, budgeting and general oversight to ensure we're exceeding our guests' expectations," she explains. "I have daily phone conversations with the directors and occasionally stop by, sometimes unannounced, to make sure they're maintaining our standards."

Building a team: When Malloy arrived at the PNC Firstside account in 2003, she had no choice but to take a hard line, not her usual tactic, and make drastic yet necessary changes. Finding a well-entrenched staff that was "basically there for a paycheck," she let most everyone go, and then began to build a staff from scratch, hiring individuals who had a customer focus.

"That really turned the operation around, or so I heard," Malloy recalls. "At a management meeting later on, I was told that (turnaround) was instrumental in (Parkhurst's) being awarded these other PNC locations. I'm still on a first-name basis with hundreds of guests and I bent over backwards giving them what they wanted. I'm always out there with my guests."

By the end of this month, Malloy will begin to make quarterly progress comparisons as the first full year at the headquarters location is completed. At this point, she and her staff of 17, counting the chef and herself, serve an average of 600 to 750 daily lunchtime guests; the check average is about $2.20 for breakfast and $4.55 at lunch. Total sales for the year at the headquarters cafe are just over $1.4 million, with catering contributing about 25% of the total.

Diffusing P&L angst: Fortunately, Malloy inherited a "wonderful staff" at the headquarters account and reports very low turnover. The major challenge was to win over the minds and hearts of guests who were used to paying lower, subsidized prices.

"One of the ways we did that was by marketing our FarmSource program," she points out. "Depending upon the time of year, we menu a lot of vegetables and fruits that are locally grown, as well as hormone-free milk, locally made cheese and honey from local bees. The honey is used as a menu ingredient and jars of it are available for purchase."

In keeping with the FarmSource theme and her own personal passion for gardening and cooking, Malloy and Chef Dave recently marketed a Fresh Herb Week. Pots of locally grown basil, thyme, oregano and sage were displayed along with typed descriptions of the uses of each. These herbs were then featured in recipes throughout the week with appropriate signage indicating their inclusion.

The creation of theme meals is left up to the individual accounts rather than being part of the contractor's designated calendar, and Malloy enjoys frequent brainstorming sessions with her associates to come up with the next event. "We usually run four culinary promos, or theme meals, each month to create excitement since I want our customers to really look forward to coming up," she explains.

For a recent TV Dinner Day promotion, "I ordered a few hundred aluminum, three-compartment trays that look just like the ones used for the old frozen TV dinners," Malloy reports. Chef Dave dug deep into the necessary research. "We menued Salisbury steak, boneless fried chicken and roast beef, all entrees that are reminiscent of that time," she says. "We put (his findings out on posters in the cafe where we also showed a movie during lunchtime that day.

"We also did a 'Half-Way To Thanksgiving Day' in May, offering a whole turkey dinner with stuffing. Our marketing message was: 'Why wait 185 days until the Big Feast?'"

Enhancing the brand: A Starbucks coffee kiosk has played a central role in helping to create the value-added perception Malloy strives for. She was instrumental in bringing the branded concept to the PNC Firstside account and has taken steps to enhance the offering at her headquarters cafe.

"When I arrived, it was already here on the 15th floor of Tower One, open from 7 a.m. to 3 p.m., but we soon added our own fresh bakery items," she explains. "Our baker produces tarts, scones, homemade muffins, pies and cakes. I can't resist her Black Cherry Black Forest Cake. And, for breakfast catering, the president of our bank loves her chocolate chip muffins. With the addition of these fresh bakery items, the kiosk is now generating about $800 in daily revenue."

Another Starbucks kiosk will soon open in the lobby of PNC Two Monday through Friday from 7 to 9 a.m. The objective is to capture breakfast coffee and bakery sales of guests who don't have time to make the trip to the 15th floor cafe of Tower One.

Fresh-baked pastries will also be prominently featured at the new lobby kiosk and are available for take-home in a Bakery-To-Go program that Malloy was instrumental in creating. The menu for that, as well as the full daily cafe listing, including special theme meals plus catering options, are accessible on-line. In addition, a print order form can be filled out and handed in at the bakery area.

Dining in: Although studies reflect that a growing number of customers are seeking items to carry out, Malloy's guests, by and large, prefer dining in. "Pre-made salads and sandwiches aren't going as well as those made-to-order at the deli line, which is very popular here," she says. "We offer many types of meat, a daily special, plus there's always a daily combo meal. We make our own tuna and chicken salad and loaves of bread are sliced in front of the guest."

At the grill there are four or five combos each day that are menued as value meals. In response to guest surveys that Malloy conducts twice a year, a value meal priced in the $3 to $4.25 range, perhaps a cheeseburger, fries and a drink, is now offered as well. "Again, this is an example of listening to guests and taking action," Malloy contends.

"To generate more business, I'm always out front, listening to their likes and dislikes. A couple of people were asking for hot turkey sandwiches; we'd done hot roast beef and carved ham, but people came out of the woodwork when we did that turkey. We'll probably add it to the six-week menu cycle."

Joining the circle: Malloy believes that getting involved in a wide circle of PNC Bank activities is also part of her mandate. Early last month, as the city of Pittsburgh hosted Major League Baseball's All Star Game, she and her team catered an event for about 150 ballplayers, celebrities and bank executives at the PNC Bank branch located within PNC Park. It was no small honor since Parkhurst Dining Services was chosen over two nationally branded concepts that operate eateries within the ballpark.

This summer, Malloy hopes to recharge her batteries by devoting quality time to her three children, ages 17, 16 and 11, and to her husband who, she confides, really appreciates her cooking, baking and especially her Grand Marnier creme brulee.

Meanwhile, drawing constant inspiration from her gardening (her "passion," she says) and from her extensive library of cookbooks, she's mentally gearing up for the opening of the new PNC Tower, slated for completion in 2008. She expects an additional 1,000 customers, mostly from PNC but also from a lead tenant whose employees will have access to the cafe.

"There's no talk yet about enlarging our location, so we'll wait and see what changes may be needed," she says. "Meanwhile, our client wants us to do grilling outside, so we'll aim to make that happen very soon."