Transplanted South Carolinian Neal Lavender has successfully and impressively set down roots within a four-block area of downtown Dallas, Texas. There, the dynamic 37-year-old serves as director of food, nutrition and conference services at 866-bed Presbyterian Hospital of Dallas (PHD), one of the largest healthcare facilities in the Southwest. Lavender manages more than $11 million in managed volume and oversees 133 employees, including two chef managers, two dietitian managers, eight supervisors and a 15-member clinical team. Under his direction, 1.3 million meals are served annually, about 550,000 of them patient meals. 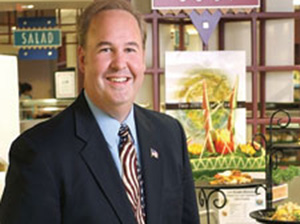 Building on greatness: Arriving at PHD five years ago, Lavender brought with him a wide array of knowledge and experience, most of it gleaned during his work over an eight-year period for five of the industry’s leading contractors. “Doris Wilson, who was here previously, did a great job, so I was able to build on that to bring the facility up another couple of levels,” he says. “Of most importance, there was great support and leadership above me, plus a great [management] team that cares about the organization.”

Lavender has become a welcome addition to the leadership ranks, PHD president Mark Merrill points out. “Neal’s professional and service-oriented approach to foodservice management and guest services has contributed to improved performance within foodservice and to overall patient, guest and employee satisfaction.”

In a rather unique structure, Lavender reports to the vice president and chief nursing officer, Martha Steinbauer, who bridges the gap between the nursing staff [who deliver patient trays] and his team, while providing support above.

Priming café sales: The first piece in the quest for improvement that, in fiscal 2006, accounted for an 11% increase in cafeteria revenue (an increase of $153,634 above targeted budget revenue), was getting the right leadership over the retail business. “I brought in two chefs who continue to enhance the skill level [of the members of the production kitchen staff]. Plus, they’re always thinking out of the box,” Lavender says.

With chef input, Lavender began featuring Tyson’s Crusteano’s Sandwich Crafters branded concept, which sells an average of 165 sandwiches per day, versus 40 previously. “We have implemented new menu items with higher price points, but the value is still there and you can get a full meal for under $4,” he points out. “The service orientation and culinary flair of our staff that is showcased at eight venues in the food court, in addition to the various featured brands, have combined to generate customer satisfaction scores that are consistently above 90%.”

Creating ‘healthful’ buzz: Now, gourmet display cookery is a daily cafeteria focal point, and special events are much more frequent than in years past. “With involvement of the hospital’s Diversity Council and our team, we now do about 15 events a year, including Martin Luther King Day, Cinco de Mayo and Chanukah,” Lavender notes.

“We also really kick-started National Nutrition Month awareness,” he adds. “I wanted our clinical RD team to assist us in featuring healthy selections and to educate our customers on this campus regarding healthy nutrition. Now, March is the highest sales month of the year overall, but particularly of healthful fare. The dietitians are involved in marketing by creating flyers, sending e-mails, bringing in food manufacturers with booths, and showcasing ‘good’ and ‘bad’ nutrition. They’re out there throughout the whole month. Some recipes from that month have become popular regular menu items including couscous salad, seafood orzo, and Tuscan chicken, just to name a few.”

To achieve a substantial increase in vending commissions—23% last year, providing $27,000 in additional revenue—Lavender strengthened the vending commission negotiations, another tactic he gleaned from the contractors. “I told our System Nutrition Council here at Texas Health Resources [THR is an affiliation of 13 facilities that forms one of the largest health systems in the country]: ‘You can ask [vendors] for more,’ so they did. Our commission was about 20% at the time; now it’s about 30%. Overall, we currently oversee about 65 vending machines on the four city blocks of campus. Also, I’m constantly looking at changing the face of the machines to create an inviting and consistent look. Plus, we’ve added credit card swipes to make purchasing easier. For the new emergency room area, we now have six machines, instead of four as in the past; we definitely have to provide those meal options around the clock. We’ve also done a bit of ‘healthy’ vending. Contrary to popular belief, healthful products do sell, but you have to constantly look at the specific products and the mix of what you’re offering.”

Childhood pleasures: Raised in a military family—his father was in the U.S. Air Force— Lavender was exposed to a wide variety of foods throughout his childhood. His mother took great pleasure in cooking and continually tried out recipes she collected from fellow Air Force wives. “I think that started me appreciating a wide array of flavors at a young age and she encouraged my experimenting in the kitchen. Then, on weekends, Dad would be on the grill, cooking various meats and kabobs. They both evidently loved to cook and that sparked my interest, which led me to a food-related college degree and a career.”

Holding down jobs in restaurants and hotels during his high school and college years, Lavender enjoyed the foodservice scene, first as a dishwasher, then as a cook. Having earned a bachelor of science degree in hospitality management with a minor in business administration from East Carolina University in Greenville, N.C., he was quickly recruited by Marriott Management Services for a healthcare position on the retail side at the Medical University of South Carolina in Charleston. Further contract management company training accrued under the Sodexo banner (following its purchase of Marriott), and later with ServiceMaster. Interestingly, it was during his tenure with ServiceMaster that he got his first chance to be the director of a self-op location, Lavender recalls.

“I had trained an executive chef who then went to work for ServiceMaster and I soon followed when they offered me a job at St. Luke’s Shawnee Mission Health System in Kansas City, Mo. Six months later, the account went self-op and the client asked me to stay on. I said, ‘Why not give me environmental services, too, and pay for me to earn my master’s degree at night?’ St. Luke’s Northland Hospitals worked it out with ServiceMaster and I was able to earn my master’s in health services administration over the next two years from Central Michigan University.”

The learning curve: Subsequently, in two venues for two different contractors, Lavender took on demanding jobs where few of the essential systems were in place. The first of the two accounts was for Aramark at the University of Maryland Medical System in Baltimore (UMMS), which he recalls as being “a very hectic, intense job—a real trial by fire. It was the biggest job I’ve ever taken on, being over three facilities after the departure of the general manager.”

The second job came two years later, in 1999, when Lavender joined Morrison Management Specialists as the system director over food and nutrition services for three hospitals, with a total of 1,300 beds, that are part of Grady Health System in Atlanta. “This was another very intense job; I had about 185 staff members, including other directors, reporting to me,” he points out. “There was high turnover, especially among the management team. Meanwhile, I was also working one-on-one with a lot of high-level administrators. Because it was a start-up account, we had to get all the Morrison systems, including payroll, up and running, and also implement a hostess system that was new at the time. Grady is a tough place to work; indigent care is provided in the facility and there are metal detectors—but no furniture—in the front lobby. I had to learn to be a quick-change artist since, minute to minute, I could be hit with multiple issues,” he asserts.

A ‘mini CEO’: Lavender says he really honed his organizational leadership skills at Grady; it was there that he felt like “a mini CEO,” dealing with a leadership team, coaching and bringing people up to speed on the start-up programs that needed to be put in place and made operational. It forced him to be even more creative and make good decisions quickly.

Focus on health: During the past year or two, Lavender has focused on increasing customer awareness of healthful eating as well as reducing trans fat. Today, both cafeterias—Jackson and Cafe Presby—are 75% trans fat free, with a goal of 90% by September.

“Customers expect great tasting, chef-inspired, RD-supported food with lots of innovation,” Lavender asserts. “Once you set the vision and the mission in place, you must constantly coach on ‘here’s what I expect.’”

Today, with one goal after another achieved, he’s convinced he has “the best team in the country.”