She may be pulled in six directions at once, but there's nothing frenetic about Mary O'Connell, MS, RD, director of food and nutrition services at 213-bed United Odd Fellow & Rebekah Home located in the Castle Hill section of The Bronx. In fact, judging by her fine sense of humor, you'd never know that her daily to-do list is in a constant state of flux. "Everything changes direction every day," she cheerfully admits. "If you're very 'bank-like,' you're in trouble." 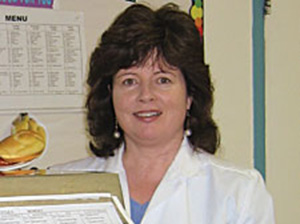 This year is just a bit more complex than most. O'Connell is overseeing the construction of a brand new kitchen that is slated to open in June 2007. She's working closely with the architects and the construction crew, to make sure that not only will some elements of her "dream kitchen" be included (the affordable ones, that is) but that those she was taking for granted will be incorporated without a hitch as well.

Seeing the light: One feature that is not on the drawing boards is the tray line. O'Connell slowly but steadily transitioned this not-for-profit facility to buffet service during the better part of her first year on the job almost seven years ago. "It was a standard tray line operation here in November 1999, with disposable trays, plates and utensils," O'Connell recalls.

"I'd previously worked with Aramark and they did buffet service for a portion of the meals at some accounts. Since I'd seen staff and resident satisfaction improve greatly, my plan here was to do the same and get my employees out of the basement kitchen."

By June 2000, having purchased dishes, utensils, two heated carts (like steam tables on wheels) and a dishwasher, she had buffet service running on two floors; by August it had been implemented in all four dining rooms on three floors with no additional employees needed.

Nursing role: O'Connell's equally new-to-the-facility administrator was willing to take a chance on her idea, but winning over the staff took understanding and patience. "At first, the staff was very nervous with the buffet concept," she says. "They couldn't imagine not having trays and having to go to the floors and see the residents. Now, most of the foodservice staff of approximately 30 full- and part-time employees are in the dining rooms and several announce the menu out loud to the approximately 43 residents in each venue. They're behind the buffet table where they plate up the entree and hand it to the nurse who has previously shown the residents the main and alternate selections displayed on little carts they wheel to each table."

Since the dining rooms are also the facility's day rooms, the foodservice staff can get in and set the tables with placemats, napkins and utensils 45 minutes before service. But no food is put on the tables until a licensed practical nurse (LPN) or certified nurses aide (CNA) is present in order to avoid a person touching another's food.

"Residents can see and smell the hot foods on the carts," O'Connell explains. "The nurse (or aide) has a selection of the main and alternate entrees and can go to the cook and ask for two vegetables instead of the starch portion, or a sandwich if that's what the resident wants. Typically, four to six people are seated per table and no one transports their own meals."

Sensory turn-on: O'Connell believes the staff was bored with the "same old, same old" job before, but now, when they see the smiles on the residents' faces, they feel they're doing something important. "And the residents are empowered by this sensory approach to food," she says. "Perhaps they didn't know what a Monte Cristo (sandwich) is, but now they can see the choices."

It's almost impossible to put a dollar amount on the savings, if any, that the switch from tray line to buffet service has accrued, O'Connell contends. But she does know that the total menu revamp created more choices of better quality and plate waste has decreased since residents are making their selections at the time of service. Ongoing, albeit informal, reports of the Food Committee that O'Connell instituted in 2000 reflect increased resident satisfaction. They're especially pleased that "hot food" is now served "hot" since the previous long delays in passing trays have been eliminated. They also see how their suggestions are being implemented.

"There was a Resident Council in place when I arrived, but that dealt with lots of issues," she says. "I wanted a committee to just focus on food and to be able to go into detail. Now, about 30 to 50 residents attend our quarterly meeting, whoever is alert, verbal and wants to taste some new recipes is welcome."

Strengthening clinical links: O'Connell has also strengthened her department's links to the weekly Resident Care Plan Meetings since, as a dietitian, she knew there were clinical issues that needed to be addressed. "I established clinical protocols for charting and we pre-printed nutrition assessment forms for admissions and for quarterly reviews for residents," she points out. "Today, I still do some charting along with one full-time and one part-time dietitian. Before I came, the dietitians didn't attend these weekly meetings, they were there in absentia. But I believe an interdisciplinary approach (to resident care) is very important."

Weight loss is one of the quality indicators that is always of concern in a nursing facility and O'Connell finds it's often best resolved by discussing the problem directly with the resident and their family. "I particularly enjoy the meetings when the families are there," she says. "Would serving more plantains, for example, or certain other foods they enjoy, trigger their appetite? Sometimes it's the time of the meal, perhaps we need to have breakfast available at 10 a.m. for a late riser."

Ethnic expansion: Over the years, the ethnic composition of the population at the home has changed and the menu reflected that shift in its transition from kosher-style then to one offering more choices of foods from all over the world. Executive chef Herb Thomas aims to meet the palate preferences with items including Jamaican beef patties, tacos, enchiladas, pork chops and collard greens.

"We try to spice up our menu as much as possible but it was a challenge to get our cooks, who are mostly from Puerto Rico, away from using the seasoned salt with MSG on everything," O'Connell confides. "Now, we're big on garlic, but overall that's healthier than salt. Also, with so many people here from Puerto Rico, Peru, Jamaica, Haiti and Cuba, offering alternate entrees on our buffet service is our best way to cater to their preferences."

Purchasing efficiently has been one of O'Connell's goals from the outset, when she realized that having approximately 30 vendors wasn't the best way to go. By doing a spreadsheet analysis of the dollar amount spent on the top 20 items, the ones the most money was being spent on, she was able to convince administration to switch to a prime vendor.

"It was an arduous task but money talks," she asserts. "We belong to the Greater New York Healthcare Association and through them we linked up with Innovatix, a non-acute care venture with Premier."

Beyond the home: This year, as well as devoting time to her duties as president of the New York City chapter of the American Society for Healthcare Food Service Administrators (ASHFSA), O'Connell is keeping a watchful eye on the completion of the new kitchen, her dream since she first chose a career in foodservice.

Born and raised in Ireland and inspired by an aunt who was an excellent cook and worked in foodservice, O'Connell earned a diploma from the Dublin College of Catering (now renamed the Dublin Institute of Technology). "But here in the States, they told me that if you want to get ahead in hospital foodservice you need to be a dietitian, now we all know that's not true. But I said, 'Fine. I'll do whatever it takes,' so I went back to college, earned a bachelor's degree in home economics from Queens College (in Flushing, NY), then a master's of science in nutrition."

Along the way, O'Connell got married; had two sons, now 10 and 12 years old; and rose rapidly in the Aramark ranks on the clinical nutrition side of business to become a director of clinical services overseeing multiple sites.

Her new kitchen: But she has always yearned to run her own kitchen. "This nursing home has given me the opportunity to be part of operations and be responsible for it, and now there's going to be a new kitchen," she beams. A blast-chiller will gladly be welcomed as it helps the staff meet the challenge of getting food from 140°F to 70°F in two hours.

But tilting skillets, (there was no room for them before) plus a dedicated elevator located directly outside of the kitchen for quick transit to all five floors, will all be duly appreciated.

"I was also persistent in making sure that the floor sloped to the drains in the production area and by the dish machine," O'Connell reports. "And I told them they needed to have filters in place to filter the water before it goes to the equipment, since the mineral deposits have broken valves here in the past. It's something nobody would think about having to point out. It's scary but you have to double-check everything!" And she does.