Justin Johnson has revived the foodservice department at Watertown Regional Medical Center by: 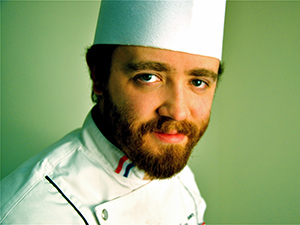 In 2012, Justin Johnson was given a rare opportunity by the administrators at Watertown Regional Medical Center, in southeast Wisconsin. He was asked to create a new foodservice program at the 90-bed hospital, one that would purge the notion of bad hospital food from the minds of employees, patients and visitors.

“Administrators decided they didn’t want to serve ‘hospital food,’” recalls Johnson, a man who had both restaurant and non-commercial experience—but none in hospitals. “They wanted to approach food as medicine and they wanted people to have a memorable experience when they were here. But they said, ‘We’re not restaurateurs and so we don’t know how to do it.’”

Tina Crave, vice president and chief patient experience officer at Watertown, acknowledges this. “People see a hospital as a place to go when they’re sick,” Crave says. “But we’re part of the community and we should be more than that. We wanted a foodservice program that promotes health and wellness and at the same time gets away from the stereotypes that hospital foodservice has.”

To accomplish the task, Johnson switched to his default mode: prepare everything from scratch. He created a room service program where almost nothing is prepared until a patient’s order is first received in the kitchen. He applied the same philosophy to the Harvest Market, the 95-seat restaurant that opened in the fall of 2013 to replace the old employee cafeteria.

“Everything here is made from scratch,” Johnson says. “The only thing we don’t make in house is bread because of the volume we use.”

Patient room service is available from 6:30 a.m. to 6:30 p.m., and patients can order whatever they want off the menu at any time.

The Harvest Market is open from 11 a.m. to 6:30 p.m. and contains four stations: Flatbreads, Sandwiches, Skillets, and Soup and Salad. Each station has a set menu, which changes seasonally twice a year. In addition, each station has one or two chef’s specials.

For breakfast, there is the Harvest Café, a kiosklike structure inside the restaurant. Open from 6:30 a.m. to 11 a.m., the café offers omelets to order, baked oatmeal, a variety of fresh-made baked goods, coffee and espresso-based drinks.

What you won’t find at Harvest is soda. Only iced tea, flavored waters, coffee and bottled juices are sold in the restaurant or offered to patients. When Johnson came on board, sodas were banned as part of the hospital’s push for healthier foods. Johnson admits it was not a popular move, but hospital administrators have stuck with the decision.

Much of what is served to patients, staff and visitors, at least for part of the year, has ingredients that come from the 11,000-square-foot-garden on the hospital grounds. Johnson estimates that, given a good growing season, between 80% and 85% of the produce used in the hospital will come from the garden.

What can’t be grown at the hospital is often sourced locally. All snacks are both healthy and produced in Wisconsin. Milk, eggs, cheese, meat and bread also come from local farms or companies.

Growing into the role

As far as chefs go, Johnson is a bit of a late bloomer, even though he has been working in restaurants since he took a job as a dishwasher at 17 at a truck stop near his hometown of Slinger, Wis.

“I didn’t have any real desire to get into foodservice,” he says. “It was more like, I needed a job and my friend’s dad owned the truck stop, so …”

What he wanted to be was an actor, so while he continued to work in restaurants he acted in local and regional theater in the Milwaukee area for five years, until he realized he wasn’t going to be able to support a family this way.

“I was married and we were about to have our first child,” he says. “I hadn’t had my interest or passion in foodservice ignited yet, but since I had spent all these years in foodservice it only made sense for me to go to culinary school.”

So he enrolled at Le Cordon Bleu in Chicago and earned an associate degree. He then returned to Milwaukee, prepared to set the restaurant world ablaze.

“I pounded the pavement, looking for that head chef job because I thought I was ready—which I clearly was not,” he recalls.

He worked at a Milwaukee restaurant for a while and then took a job with Sodexo at a Wells Fargo account, in Menomonie, Wis. In 2007 he left to take a job at Harwood Place, a retirement community in Wauwatosa, Wis.

His work there caught the attention of the general manager at Hotel Metro, in Milwaukee, who wanted the hotel foodservice to do more local sourcing and increase sustainable practices. But several months after Johnson accepted the job, the GM was let go and the replacement wanted to take foodservice in another direction. Four months later Johnson landed the Watertown job.

Creating a new foodservice program at Watertown meant changing the established culture, which Johnson referred to as “factory mentality.”

“You slide a pan into an oven, set the timer, wait for it to go ‘bing,’ set the food out and go home. And all the while your brain is off. You’re not actually cooking, mentally,” he says. “That was the thing we had to change before we ever thought about changing menus or sourcing locally.”

The first step was to rewrite job descriptions and then require the existing foodservice staff to apply for them. People who were referred to as hospitality aides, diet techs and other non-restaurant titles would have to prove their worth as porters and servers, line chefs and market chefs.

“Of course, they weren’t very happy about it,” Johnson says. “They thought we were making them apply for their jobs. I told them, ‘your jobs are gone. We’re giving you an opportunity for a new job in this new place.’” (Both the kitchen and restaurant were being renovated.) However, because there would be nine months of construction before the hospital would be ready for the transformation, Johnson used the time to put interested employees through “culinary school.”

“I took my experience and created a 26-week culinary course,” he says. “If someone wanted a job in a cooking capacity they had to enroll in my ‘school.’”

Johnson wanted his staff to have a relationship with the ingredients that make up the dishes on the menu. “A chef should have his hands on the ingredients,” he suggests.

Classes were held for two hours every Tuesday and Thursday and covered the gamut, from basic cooking techniques to the physiology of food. The final exam was creating a pop-up restaurant, set up at the local country club, where the eight candidates were divided into two teams that served 40 people in a two-hour period.

All but one of the students graduated, and that remaining employee was retained but in a non-cooking job. Johnson has since augmented the kitchen staff with 10 additional chefs.

One of those 10 is Chef de Cuisine Charlie Jilek, who joined the staff about seven months ago after working as executive chef at the University Club at the University of Wisconsin at Madison. He says he is enjoying “letting my creativity fly.”

“There are no guidelines. Chef’s only guideline is that you make good food,” Jilek says. “There are some recipes on the menu that we have to follow, but as far as specials go, it’s all on us. He definitely wants to show Watertown that you can have good food in a hospital.”

“Not a health food restaurant”

Despite the hospital’s desire to have its foodservice be seen as healthy, Johnson doesn’t go quite that far in his description.

“We don’t try to bill ourselves as a health food restaurant,” he explains. “It’s all about balance and knowing what you’re eating. What we are saying to people is, there is nothing in the food that we didn’t put there. That doesn’t mean we’re not going to mount a little butter into the mustard cream sauce. It’s going to be there, but we’re going to tell you that it’s there and we’re going to be able to tell you how much is in there and it’s going to be in balance with everything else that’s on the plate.”

Johnson bristles a bit at the suggestion that what he’s doing couldn’t be replicated at a larger hospital.

“Sure, being a small facility has its advantages,” he says. “With the size staff we have I think we could do three times the volume because the setup is so efficient and the people we have are so talented.”