Growing up in Montana, Anthony Balzarini developed a passion for reading history books. He majored in history at the University of Minnesota and planned to teach on the high school level. Three years into the program, Balzarini decided to trade chalk for a whisk. He switched his major to hotel, restaurant and institutional management, with a focus on institutional management, and never looked back. 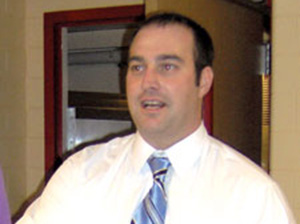 Since arriving on the scene two years ago, Balzarini has taken numerous challenges in stride including gearing up for and implementing room service in both locations, and dealing supportively with his unionized staff, including clinical dietitians—there are 65 department members at Deaconess and 20 at Valley—as they faced a new mode of patient meal service. Meanwhile, he initiated plans to improve patient and customer satisfaction and to grow the bottom line in retail operations. To hear him talk, it's been a piece of cake.

Room service transition: "When I arrived at Empire Health Services, room service was on the drawing board at Valley but not yet mentioned at Deaconess," Balzarini recalls. "We didn't have to hire new employees at Valley—we actually did the transition to room service budget-neutral on the payroll side and reduced staff by one full-time employee [FTE]. At Deaconess, we increased the staff by six FTEs since we especially needed people with short-order line experience. We're a union shop so there's a process where you basically need to redesign your department and write new job descriptions. We also wrote a new menu—now the same core menu is in both locations—and did extensive [patient] service training."

As part of the host and hostess program, Balzarini's staff now sport tuxedos and white shirts as they pass the trays throughout the floors. Following their initial assessment, nursing determines which patients can fully participate in the room service program, which need assistance from the foodservice staff in ordering their meal, and which are not able to participate and should receive the "house diet." Overall, 19,000 patient meals are served each day.

Nurturing nursing: During the past year, Balzarini and his staff have concertedly focused on improving patient satisfaction scores and use the contractor's Adopt A Floor program to meet that goal. "We implemented it right before starting up room service," he explains. "The aim is to get managers onto the floors."

Each manager, including the chef, is assigned to a floor with the goal of creating a personal relationship with nursing. Every week each manager is required to conduct 15 patient interviews to get to know their likes and dislikes. "The program has cemented the relationship between our department and the floors, allowing for quick change," Balzarini asserts.

"For example, one patient on a liquid diet didn't like our broth. We found that we'd changed our specs and, in fact, it wasn't as good as before. Of course, we immediately went back to the original product. Or if we had a problem with omelettes in the morning, I'd take it up at the mini meeting that day."

Mini meeting matters: The mini meeting—there are two each day, one at 9:30 a.m., another at 4 p.m.—is a concept Balzarini developed in order to ensure speedy problem-solving. In fact, he credits it with taking the department to a whole new level of customer service. He also cites the mini meetings, implementation of a new waste-reduction program called Valuwaste and the department's "very good production manager," as contributing to the 10% decrease in food costs recorded since his arrival.

Valuwaste uses a computerized scale that was set up in the dish room at Deaconess about five months ago when Aramark chose it as one of six beta sites in the country. Any waste headed for disposal is weighed and an entry made in the scale's computer as to the date and what the waste is—for example, meat, milk, pasta, etc. "A committee of foodservice employees sits with a chef on a weekly basis, discusses what's being wasted, and comes up with recommendations," Balzarini points out. "Then, at a mini meeting, they might talk with the team about salad bar waste, for example. Just the fact that it's on people's minds is a key driver in eliminating or at least reducing the problem."

Counts up 8%: From the outset, Balzarini has kept a firm hand on the patient side of operations while simultaneously aiming to improve retail business. Today 33,000 retail meals are served per month at Deaconess and 8,000 at Valley. Customer counts have increased by 8% and check averages have broken through the $4 mark. That's worth crowing about when benchmarked against other northwestern locations including public restaurants, he contends.

"Two years ago, I redesigned my whole management team. I knew I needed a patient service manager, but I also needed a retail manager," Balzarini says. "The retail manager is charged with upgrading services in retail and catering as well as implementing new café menus. Now, menus are changed every 12 weeks since keeping it fresh for customers is key to increased sales.

"In addition, we implemented a new point-of-sale system that accepts debit and credit cards at both facilities. Aside from increasing sales, this system allows us to track our sales very consistently so that we can quickly pull the 'dogs' off the menu."

But Balzarini, who readily admits to having an adventure gene that leads him to experiment in the kitchen, enjoys creating excitement with unexpected monotony-breakers. Last year, he and his team brought in a big-screen TV in order to broadcast the NCAA Tournament basketball games. Coupons for discounted items were issued and customers also received a ticket with a team name on it. Those who held a ticket for a team that won the tournament were entered into a drawing for prizes.

Menu magic: Overall, Balzarini credits the customer count increase to monotony-breakers, to a bit of "prettying up" with a touch of paint here and there, and to new menu items featured each month. Such menu items are in addition to the contractor's seasonal Fast Tracks program—such as apple-based menu items in the fall—which he runs aggressively each quarter.

"We recently introduced a waffle station since we saw the need for more breakfast options," he says. "Now, Belgian waffles are available daily. We're selling about 35 orders a day versus zero before, and they're priced higher than the average breakfast check."

Another move that increased sales was adding credit card access to all of the 56 vending machines on campus. "We were the first that I know of in Spokane and we have it in both hospitals," he notes. "We provide items for the cold food machines and contract-out the soft drink and snack machines."

Retention attention: A key indicator that things are running smoothly is low employee turnover and, since Balzarini's arrival at Empire Health, it's been reduced to the point where it's now less than the local and national average, he says. He believes that taking a two-pronged approach that includes both training and recognition is the best way to retain a stable team. "We developed the program from the ground up versus saying to a new employee, Here's your spatula, see you in a month! The first step is employee development," he says. "When they start, we give them a four-hour orientation and they sign the statement of expectations created by our dietary department employees. Then, they get actual hands-on training and they aren't allowed on the floor by themselves until they've passed the competencies for that position."

To develop an employee recognition program in response to an Aramark challenge issued last year, Balzarini and his management team, along with an employee committee, devised the "You Rock" program in which any "witness" to an act of another employee that's deemed 'above and beyond' expectation can award a card (with appropriate points) that's eventually redeemable in the facility's retail areas. In addition, Balzarini—never at a loss for words of praise—sends out personal thank-you cards each week, expressing his appreciation to workers who have done an outstanding job.

At the end of the day, this foodservice director heads home to provide foodservice for his wife and four kids. Often he prepares a meal that's "experimental" just because food should be fun and exciting—at least that's Balzarini's historical perspective on things.