When Ted Mayer came to Harvard he faced outdated facilities and redundancies. To turn things around, he concentrated on creating a master plan that included dining hall and servery renovations and improving grab and go and retail options. With those parts of the plan complete, Mayer was able to turn his attention to a unique education program called The Food Literacy Project. 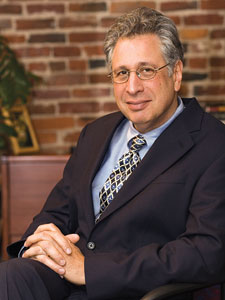 At a Glance: Ted Mayer
•Chief Operating Officer, Harvard University Dining Services
•Harvard University, Cambridge, Mass.
•Been in foodservice since 1973; came to Harvard from Middlebury College
•Serves 25,000 meals daily, 5 million annually
•Manages about 30 operations, including 13 Haarvard houses
•Foodservice sales are $47 million; has increased residential revenue 33% since 1997
•Oversees a staff of 600; scores in the 87th percentile in the Great Places to Work survey

About 370 years ago, Harvard University was still a “college” in its infancy and had just a handful of students and one master. Since then, the nation’s oldest institution of higher education has only grown in size and in reputation. It has evolved through the centuries, and radically, even, in some periods of its history. It may have retained many of its core values as an academic institution, as well as its culture, standards and thus its prestige.

But, like every university, it must progress with the times.

Dining service was presumably not an issue in 1636 when Harvard’s enrollment didn’t quite hit the double-digits. By 1997, when Ted Mayer left Middlebury (Vt.) College, to join the team at Harvard, dining services had been in full swing for a long time and the facilities were ready for an upgrade.

His plate was quite full from the start. “What I first faced was a need to develop a master plan,” says Mayer, now chief operating officer of Harvard University Dining Services. “Many of our facilities had not been renovated in 20 or 30 years. They were doing as good a job as they could but the facilities weren’t designed for the kind of food served today.”

A new decade: At his direction, HUDS launched a 10-year plan that included dining hall and servery renovations, kitchen upgrades and a new approach to foodservice, both back of the house and front.

Getting student feedback has been as important a piece of the overall plan as any; in fact, it was step one. Dining services hired a third-party team to come in to get an objective perspective on people’s perceptions of Harvard’s dining services. “We did about 400 interviews of students, administrators, faculty and people involved in foodservice operations or intimately involved in the house system,” he explains.

The residential dining program at Harvard comprises 13 houses, or residences, each of which includes its own library, common areas and dining room that are the center of house life. “The dining rooms are their homes away from home,” Mayer notes.

Streamlining: Among the challenges he has tackled during his time on the Ivy League campus was the elimination of redundancies that existed in the operation of the dining halls, largely with the creation of a central cook-chill production facility that supports all the houses. The dining rooms themselves were renovated mostly during off-peak periods. “We couldn’t go off-line during the year because there wasn’t the space to do that, and the dining room is so integral to each house,” Mayer says.

“We finished all the renovations this past summer. We gutted everything to the outside walls and did it in eight years instead of 10.” Satisfaction survey ratings have shot up since then, he adds.

The retail operations are also thriving. Self-branded concepts developed by a team that has done its homework seem to satiate the student population’s hunger on many levels. They address the need for variety and convenience, satisfy the demands of the health-conscious or those on specialty diets (whether it be kosher or vegan) and give students plenty to choose from.

HUDS has also stretched its service to meet the needs of its time-pressed clientele with grab-and-go options and late-night service where possible.

Food literacy: With the planned renovations completed more than two years earlier than projected, Mayer has refocused his energy toward initiatives such as the Food Literacy Project. It focuses on four areas of food—nutrition, community, preparation and agriculture—and aims to educate students through various means.

It stretches dining services’ scope of interest beyond the customary realm of retail enterprises and cafeteria service to the more holistic approach Mayer strives for. His approach includes a lecture series, educational reading materials such as posters and handouts, and food samplings and facilitated discussions designed to increase students’ awareness of various types of foods and nutrition-related topics such as portion sizes and sodium in their diet.

“Students are very hungry for real information,” says Mayer, “and in the absence of food information, they will make choices that are not necessarily in their best interest.”

Much obliged: His commitment to nutrition and food education grows out his obligation to his customers—particularly students who as campus residents are required to eat on campus.

“It’s also important to understand what the absorption rate is of our students,” he adds. “It’s easy to put information out, but are they taking it in?”

His messages do seem to be sinking in. When HUDS rid its kitchens of all french fries that contained trans fats, students accepted the switch because the dining services explained its actions to them. “We do get challenged—after all, they are Harvard students,”  says Mayer. “But if you can do things based on good information, they are fine with it, because it really is about their welfare.”