As director of food and nutrition service for Resurrection Medical Center in Chicago and Holy Family Medical Center in Des Plaines, which are both part of the Resurrection Health Care System of Chicago—the largest Catholic healthcare system in Illinois, Ron Rech is a busy man. After converting his operations from contract management to self-op, Rech has been able to increase his revenues by 22% through a combination of increased choices, deliberate promotions and an eager-to-please attitude. 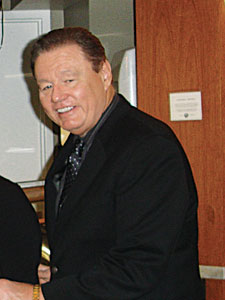 Ron Rech has loved the foodservice business all his life. In the early 1980s, while director of food and nutrition service at Chicago’s St. Joseph Hospital, he fulfilled his dream of owning a restaurant. Chicago Experience, a 65-seat eatery with a 200-seat banquet facility was his spare-time passion for about eight years until he sold it—but he never gave up his day job.

He’s also a Harley Hog and rides with the Windy City Veterans Association in its fundraising efforts. For the past nine years, Monday through Friday, he has served as director of food and nutrition service for Resurrection Medical Center in Chicago and Holy Family Medical Center in Des Plaines, part of the Resurrection Health Care System of Chicago—the largest Catholic healthcare system in Illinois.

He has spent much of his time there converting foodservices from contract management to self-operation. “Within my first four years here at Resurrection, the network began purchasing more hospitals and they were [under] contract,” Rech explains. “Part of our mission is ‘no contractors;’ as chairman of the Foodservice Council, I was charged with the task of returning them to self-op. In just the past five years, they’ve acquired many new facilities.”

Intranet visibility: Today, Rech oversees the production of approximately 1.2 million meals annually and has redesigned both patient and cafeteria service in order to make the patient experience more satisfying and the cafeteria more retail-oriented. He and his team have implemented initiatives that increase sales volume, including having the menu highlighted on the Resurrection intranet.

According to Rech, customers can click on Café Res—a 300-seat foodcourt with an additional 100 seats in an outside courtyard—and find nutritional information, specials of the week, recipes, as well as photos of the café and a cappuccino bar located within the dining area.

In addition, since independent living facilities and clinics are located on campus nearby, Café Res has attracted many seniors for meals throughout the day. Rech also conducts customer opinion surveys and prints what they’ve asked for and what his department has done in response in every quarterly issue of the Café Res newspaper.

Focus on choice: In 1993, Rech went back to school and earned an advanced degree in business management from the University of Illinois. With that knowledge under his belt, as well as from years of on-the-job experience, he knows that “you want the retail sales to grow and the offerings to provide satisfaction. Therefore, you have to focus on people’s needs—and it’s not always healthy or light,” he contends. “You have to provide enough choices.”

More than half of his meal volume comes from retail operations, while 22% is patient feeding and 24% catering. In order to keep Café Res menus fresh and exciting, they’re developed weekly instead of following the typical three- or four-week cycle. In fact, the medical center staff recently awarded Cafe Res an award for service excellence and customer satisfaction. Overall, cafeteria revenues have increased 25% within the past four years and sales will exceed the $2 million mark this year.

As chairman of the Foodservice Council for Resurrection Health Care, Rech has spearheaded the development of a system-wide corporate patient menu. “We’re not looking at cook-chill,” he reports, “but we did come up with one menu. Now eight of the nine hospitals are running the same menu so we have uniformity within the facilities on the patient side.”

The current push to provide more healthful choices dovetails neatly with Rech’s personal lifestyle. A professional “gym rat” who does his cardiovascular workout at 5 a.m., five-to-six days a week before hitting the office at 7 a.m., he has shed 50 pounds over the last two years. “We try to be spontaneous with menus, to offer something trendy,” he reports. “Now, there’s more Asian, more health-conscious items and more breakfast bar set-ups.”

Benchmarked success: A former board member of the National Society for Healthcare Foodservice Management (HFM), Rech hosted a regional conference at his facility last month with a focus on “Conquering Retail.”

Meanwhile, he has utilized the association’s HFM Express benchmarking tool and reports being consistently in the top 25th percentile in the cost-per-meal category.

Rech’s future goals include continued work toward improving patient satisfaction and increasing those scores. He’s been hoping to implement room service—and has budgeted for it in each of the last four years—but doesn’t expect to be able to offer it this year. But when he can, a newly expanded kitchen designed to handle it will be operational.

Within the next two months, Rech plans to expand hostess service for patients and their guests, offering between-meal snacks in an effort to boost patient satisfaction and increase PRC scores (similar to Press Ganey).

Rech has built a dedicated team with good morale, a team that takes pride in its work, so turnover is extremely low—about eight positions a year of the total of 123 in his main location. Most will be onboard to tackle his future plans: to take the existing small bakery operation and develop a concept that can be used throughout the entire system.