As director of food services for procurement operations for Prudential Financial in Newark, N.J., Ron Ehrhardt knows how challenging B&I feeding can be. One challenge he's encountered during his time with Prudential was the operation's transition from a subsidized program to for-profit. A change that helped effect an annual subsidy savings of $3.5 million. It was Ehrhardt's love of food and pleasing others that made his efforts a success. 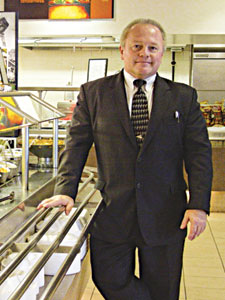 When the call came to the Ehrhardt home in New Jersey that young Ron, age 16, could have that summer job he’d applied for—washing dishes and scrubbing pots at a Marriott-operated toll plaza eatery on the New Jersey Turnpike—it marked the beginning of a sky’s-the-limit career. At the age of 21, with degrees earned in hotel/institutional management and international hospitality management under his belt, he was hired as a dietary director of a 120-bed nursing home. “I did that for two years and I was great at it—and what was really special was that my grandfather was a resident there,” Ehrhardt recalls.

Two years later he started his corporate dining career with Servomation, managing the Piscataway operation for AT&T, a profit-and-loss account, in charge of the main location with three satellites. Today he serves as director of food services for procurement operations for Prudential Financial based in Newark, NJ, where, during the past eight years, he has spearheaded two major mandates:

‘Instant gratification’: After all these years in the business—25 of them in the B&I sector—he’d “absolutely do it all over again,” he proclaims. “I love the business. It’s a people business and there’s instant gratification in putting out great meals and great catering events. I’m a ‘foodie’ and I wouldn’t want to do anything else. It’s a great industry to be in and I’ve had an opportunity to do wonderful things—to be a Hennessy Traveler to visit and evaluate top air force bases around the world—and to be president of the Society for Foodservice Management [SFM] in 2003-’04.”

Burnishing the image of non-commercial foodservice has been a personal goal that Ehrhardt never loses sight of, no matter what other responsibilities are on his plate. “That’s why I’ve done so many speaking engagements over the past four years,” he says. “No matter where I’m speaking, I’m aiming to attract top talent to the on-site industry. I think we’re still misunderstood as an industry. The perception is, ‘Top chefs don’t go there.’ But, guess what? That’s not true.”

Fair dealing: Persistence, diligence and caring—that’s what Ehrhardt is all about, and foodservice is a big part of who he is at work and in his personal life. With a hats off to his mom and grandmother—the original “foodies” in the family—he credits his dad as being a huge mentor, imparting business savvy and a knack for dealing fairly with employees.

“I always treat them with respect and I try to know everyone’s name,” Ehrhardt says. “I work with them and there’s clear direction—they never have to guess what’s important. When you challenge them you need to help them meet the challenge.

“We’ve had a much lower turnover rate here than in the rest of the industry,” he continues, “and I think part of it is, if they want to speak their mind I’m always there—I put in a lot of hours—and I’ll listen. No matter who you are, you’ve got to listen.”

Heavy lifting: For Ehrhardt, good nutrition is a way of life since staying in shape for weight lifting is also part of who he is. In fact, his skill garnered $10,000 in contributions donated to Maryland’s Community Food Banks for the SFM Hunger Awareness committee, when he bench-pressed more than 450 pounds during the association’s 2004 national conference in Baltimore.

When asked his concerns for the B&I sector overall, Ehrhardt puts food safety issues right at the top of the list.

Rising energy costs are a close second, while another concern is attracting top talent to the industry.

Team builder: Listening to and understanding  his staff—he often says, “My people are my family”—builds a sense of accountability, achievement, respect, creativity and trust among his 20-member Prudential Vendor Site Management Team and 120 employees. It also is a factor in the transition from subsidy to for-profit that has helped effect an annual subsidy savings of $3.5 million. Check averages rose 8% system-wide from $4.12 in 2004 to $4.45 in 2005; take-out grew more than 30% beyond expectations; and a healthy vending program gained in excess of 10%.

Looking to the future, Ehrhardt hopes to bring together the various foodservice associations in a working relationship. “I think there’s a lot of things we can do together to our mutual benefit,” he says.