At students' request, USM has taken an abandoned power plant and reimaged it as a hot sports bar and restaurant.

At A Glance: University of Southern Mississippi 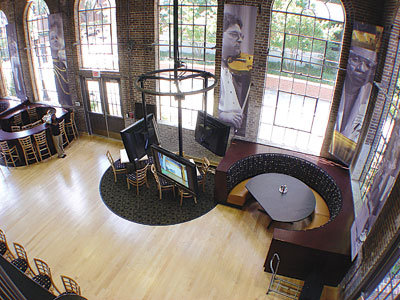 The Power House, an old power plant in the center of the University of Southern Mississippi campus in Hattiesburg, has been converted to a “power house” of a different sort—a sports bar and restaurant that has become the showcase of the foodservice operation on the 15,000-student campus.

The Power House Restaurant opened its doors last May, shortly before graduation, and has been a draw for students, faculty and summer camp and conference goers ever since.

Managed by Aramark, Power House is a two-level, 200-seat full-service restaurant that features a bar at the front of the main level, an elevated stage for live performances, 20 flat-screen TVs and a projection-screen TV for airing everything from sporting events to news programs.

During the summer, the Power House was open from 10:30 a.m. to 9 p.m., Monday through Thursday, and until 3 p.m. Friday. With the opening of the fall semester, however, the restaurant’s hours were extended to at least 11 p.m. most nights.

Student charge: The Student Government Association led the charge for a new gathering place, according to SGA President Eugene Gouaux. “A few years back, the SGA came up with the idea, to give students more dining venues on campus,” Gouaux explains. “The Power House was chosen because it was a bleak area on campus that was not being utilized. The SGA [thought] it would be more cost-effective to use a building that was already in existence.”
Due to a lack of money, the idea lay as fallow as the building until 2004, when Aramark became the university’s foodservice provider. The food management firm also manages the campus’s three residence hall dining rooms, three foodcourts and a Starbucks in the Cook Library that Aramark says is the largest in the state.

“The students’ original idea was for a deli shop,” recalls Theresa Stevenson, marketing program manager for Aramark at USM. “But with a lot of brainstorming, we were able to come up with much more.” 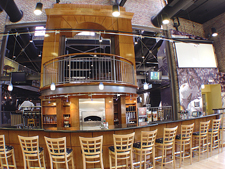 Blowing off steam: “The building itself has been here since 1934,” notes Jana Bryant, assistant director of marketing and public relations for USM. “It was designed to create steam heat for the dormitories and classrooms. But the university quickly outgrew the power plant, and it went dormant.”

Tipton & Associates, of Baton Rouge, La., designed the restaurant. Among its features are a mahogany bar, cushioned booths, floor-to-ceiling windows and a New Orleans–style outdoor patio with gas lighting.

Foodservice equipment in the building includes a smoker for preparing ribs and other smoked meats, and a circular pizza oven in the middle of the main floor. The kitchen is located in the building’s basement.

The Power House menu offers a wide variety of Southern foods, from appetizers to entrees to desserts. Prices range from $3.99 to $9.99.

Paying homage: “The Power House embodies the tradition and the history of the university,” Bryant says. “Many of the menu items’ names have some connection to the university.”

The back of the menu is dedicated to “Power House Legends,” selected famous USM alumni. Among those currently featured on the back page are singer/songwriter Jimmy Buffett, Green Bay Packers quarterback Brett Favre, and Walter Washington, the first African-American to receive a doctorate in the state of Mississippi.

The Power House already is popular, even though most of the students have yet to experience it. SGA’s Gouaux says that is understandable.

“The building is like no other in the Hattiesburg area,” he notes. “It’s a great place for students to hang out as well as a place where members of the community can come. It will be a landmark on our campus for years.”