The Colleges of the Fenway have created a unique partnership over the years. Their latest venture? One campus card for all six institutions.

At A Glance: Guide to the College of Fenway

For almost a decade, a group of six small colleges in Boston, Mass., have partnered in an effort to add value to the student experience. The collaboration, dubbed Colleges of the Fenway, allows students to register for courses at any of the six colleges. It also facilitates “faculty development workshops, joint purchasing [not foodservice-related], and joint student programs,” notes Louise Litchfield, director of business services at Wentworth Institute of Technology. 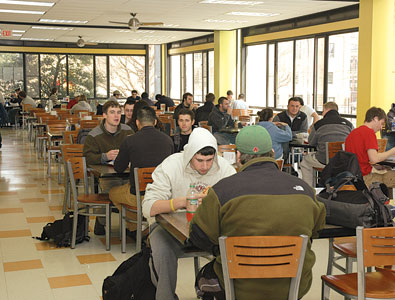 In the fall of 2006, the latest iteration in the partnership went live when the Fenway Card was introduced. While each college issues its own version as its official campus card, students from all six colleges can use their cards to make purchases—including food—on any of the campuses. The 10,000 undergrads also can use the Fenway Card at several off-campus restaurants.

Litchfield says the new card is the culmination of several years of work trying to create a shared system at a reasonable cost to the institutions. “The basic barrier to setting up a one-card system was overall cost,” she explains. “The project became feasible when we were introduced, in 2005, to CardSmith LLC, a full-service campus card provider.”

Once the consulting firm that was working with The Colleges of Fenway had completed its investigation of CardSmith and its installation at nearby Berklee College of Music, Litchfield and her group asked the card system provider to aim for a 2006 launch on all six campuses.

The idea of one card covering six campus certainly is unique, and a boon to students. But the overall foodservice scenario is even more unusual—and challenging—since there are actually four contractors providing foodservice within the six colleges. Three of the six—Wentworth, Massachusetts College of Art, and Massachusetts College of Pharmacy and Health Sciences—are operated by Chartwells Higher Education (a division of Compass Group) with Joe Arcudie in charge as senior director of dining services. Emmanuel’s foodservice provider is Bon Appetit (another Compass Group division). Simmons is an Aramark account and Wheelock’s contractor is Sodexho.

Although the main board plan money still goes to the vendor, because some of the discretionary dollars are going either to other colleges or to street-side restaurants, Litchfield admits she’s heard some concerns voiced by her foodservice provider, Chartwells.

“But we believe competition is good and there’s not that much impact on student dollars,” she contends. “Students were going off campus anyway. But now parents feel secure because we can immediately disable the card if it’s lost. And one of the biggest attractions for parents is that they can leave ‘cash’ with their students and know where it will be spent. We get a very small royalty fee—a percentage of sales—for allowing the restaurants to be approved and we specify that the card can not be used for alcohol, cigarettes or gambling.”

As another benefit to the colleges, Litchfield points out that Wentworth, as well as Simmons College, are “no longer spending huge amounts of manpower on keeping a system up and running. It’s very labor intensive and expensive to keep equipment up to date; it really was a 24/7 operation. By contracting out, it’s less expensive and we can put our resources elsewhere.”

Student satisfaction: On balance, Litchfield believes the goal of enabling students to eat in the various colleges they attend within the Colleges of the Fenway network—or street-side—is being achieved by having established a one card system for the six campuses. “Students like flexibility and variety and student satisfaction is really what we’re about,” she contends.

In acknowledging the concerns of Chartwells, her contractor at Wentworth, she notes that during this first year of operation with the Fenway Card, there has been a change to the board program in an effort to keep more money on campus. “Previously, our mandatory board was only for students who lived in apartments without kitchen facilities. Now, we’ve introduced a mandatory minimum plan of $200 per semester to offset any losses which may have been incurred [by Chartwells].”

As senior director of dining for all three Chartwells locations, Arcudie—whose office is located on the Wentworth campus—is taking a wait-and-see stance as to what further impact the Fenway Card will have on his operations. “Come September, it will be the second year and it will tell the tale,” he says. “Since the card was only marketed last summer right before the introduction in the fall and therefore wasn’t promoted over a long period, I wonder if it will have more of an impact this year.”

Discretionary funds: Arcudie, who ran foodservices at Mass Art and Mass Pharm for five years prior to Chartwells winning the Wentworth account two and a half years ago, says that the new $200 minimum board plan was in the works prior to Chartwells’ arrival. “But it’s the voluntary dollars we worry about. Previously, all three Chartwells locations had a declining balance, like a debit card, and we offered students cross dining so all mandatory plans could be used in all three schools. Wentworth is the most affected of the three because there are many more voluntary meal plans. At the other schools in the system, there’s much more money on the meal plan.”

Overall, Arcudie is certain that his accounts aren’t receiving much dining traffic from other schools. “No matter what, it’s not as prevalent as [administration] thought and hoped. Basically, we’re losing business to street-side vendors.”

He concedes that the card is “a great idea” that provides students with the convenience of not having to carry cash, as well as being “a no brainer” for parents. But he sees “quirks in the system” that could leave a student without funds. “Before, with our own card, students could call us, or stop in, or go to the Web site and the second they’d call the money was on the card. It was also a nice personal touch to be talking to the parent.”

Out of the loop: Now, with the one card system, money can be put on from elsewhere, but foodservice can’t access the student’s account from the register to know the balance. “The student has to go back to the dorm in order to check the balance from his/her own computer, although we try to help them from our office,” he says. “They could run out of money and not know it until ‘insufficient funds’ pops up on the register. Of course, we’ll take care of them—we won’t let them go hungry.”

Keeping a close eye on street-side competition, and changing the menu frequently to reflect the trends, has long been part of Arcudie’s—and Chartwells’—strategy. “We do all those same things—in fact we even make our own pizza dough. In same cases, we might even be cheaper. But changing our menu wouldn’t change the dynamic—the draw of going off campus.”