FoodService Director’s 2012 Hospital Census is a snapshot of the hospital market, based on information from the 2010-2011 fiscal year, supplied by 50 hospitals. 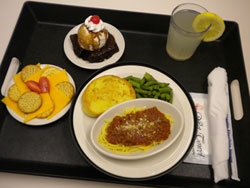 Buying More Food
Fifty-four percent of respondents said their food purchases have increased so far in 2012, with an average increase of 5%. Operators in the midsection of the country are the most likely to see an increase. The breakdown, by geographic area:

West Continues Organic Push
Thirty percent of hospitals say they purchase organic products, with an average of 8% of food purchases being spent on these items. Once again this year, those in the West were more likely than those in the East and Central U.S. to buy organic items for their operations:

Local Purchases
Every hospital in this year’s survey said they source some items locally. Produce and dairy remain the most frequently purchased local products. What hospitals say they buy locally, by product category:

Beyond the Patient
When it comes to non-patient foodservice, hospital operators offer many different types of service, but by far the most common are retail, onpremise catering and vending. The percentage of operators whose hospital offers each service:

Patient Satisfaction Surveys
Sixty-six percent of hospitals are familiar with HCAHPS, and 30% of them have made changes in the foodservice department because of the survey. Changes hospitals have made to improve HCAHPS survey scores, by percentage:

Meal Counts Slightly on the Rise
In the current fiscal year, the majority of hospitals—54%—have experienced an increase in their total meal counts. How each service is measuring up so far this fiscal year, by percentage:

A look at food purchases and patient satisfaction surveys.

Food purchases stayed relatively the same for hospitals in our survey, with only a 1% average increase between 2010 and 2011.

Gibson says the patient volume increase was due to the hospitals gaining a larger presence in the marketplace and not because of adding new facilities or beds. “We’ve been ahead of all of our [patient] projections,” Gibson says. “We have been partnering with smaller medical centers. Some of the increase in patient volume is coming from the regional area where we’ve not had a presence before. We’re getting referrals from those areas.

“Sanford is also becoming more well-known for a lot of things, especially research in diabetes, breast cancer and heart disease,” she adds.

In addition to more patients, more people dined in the cafeteria at Preston in 2011 than in 2010, according to the director. Livingood says he didn’t make any operational changes or add any employees with the increase in customers. “We only have an hour and a half service for lunch, so the employees just pick up their pace a little bit,” he says. “We just increased our production a little bit.”

This is most likely because, unlike Press Ganey, HCAHPS does not have food-specifi c questions. However, a patient’s experience with food greatly affects certain categories, such as the overall hospital experience.

“There’s a whole list of things, small and large, that we’ve done as a result of HCAHPS,” Gibson says. One example is purchasing new dishes for casseroles so that the presentation of those dishes is enhanced. Another example is changing some processes for assembling patient trays. For example, milk is now the last item placed on the tray so that it remains cold during delivery.