Looking for something new? Look south—way south, to the bold, enticing cuisine of Argentina, Brazil and Peru.

The flavors of South America have a lot to offer, with their assertive seasonings and spices, distinctive ingredients, diverse cultural influences, and intriguing back stories.

Argentina and Brazil are among the world’s largest producers of beef, and their cultures are infused with the cowboy romance of the South American pampas, where the air is filled with the aroma of sizzling beef. Both cuisines have been heavily influenced by European immigration: from Italy and Spain in the case of Argentina, while Brazil enjoys a patchwork of cultural references from Portugal, Spain, Germany, Italy, Japan and the Middle East. Some of the region’s best-known flavors and food specialties—grilled meats, sausages and the savory pastries known as empanadas—are immediately appealing to American palates.

Immigrant influence: Peru enjoys a cultural mix unlike any other in the world, combining the flavors and influences of four different continents: the native Inca and pre-Inca heritage; successive waves of immigrants from Spain, Italy and the Basque region; African slaves, and railroad workers from China and Japan. This has strongly influenced Peruvian cuisine, with the incorporation of the immigrants’ ingredients and techniques. The ancient, indigenous foods of the Incas—such as fish, potatoes (about 3,000 varieties), quinoa and other grains, corn, chiles, spices and tropical fruits—served as inspiration for these new arrivals, each adding another layer of interpretation. The resulting cuisine is flavorful and complex, distinctive and naturally healthful.

What follows is just a handful of 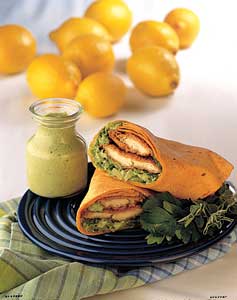 that easily can be adapted to American foodservice venues.

Anticuchos: A specialty of the Andean regions of Peru and Bolivia, anticuchos consist of small pieces of marinated meat, threaded onto skewers and grilled. They are a popular street food in Peru, in particular, dispensed from portable carts known as anticucheras.

Causas: With more than 100 different varieties that are native to Peru, potatoes feature prominently in its cuisine. The best-known specialty is the causa, a kind of mashed potato croquette or salad that can be interpreted in all sorts of ways, both traditional and contemporary. For example, causa limena is an appetizer of chilled seasoned mashed potatoes wrapped around or layered with spicy tuna or chicken salad.

Ceviche: Many adventurous diners know ceviche (a.k.a. seviche and cebiche) from authentic Mexican restaurants, but food historians believe the idea of marinating raw fish in citrus juice with chiles and other seasonings originated in Peru, with the arrival of the Spanish (who marinated cooked or fried fish en escabeche to help preserve it a little longer). Although traditionally made with raw fish, ceviche—just like sushi—can be translated into cooked ingredients such as shrimp and scallops.

Chimichurri: Often likened to the ketchup of Argentina because it’s so ubiquitous, this spicy, herby sauce/marinade is actually more like Italian pesto, from which it clearly derives. Traditionally, chimichurri is a boldly flavored combination of olive oil, chopped parsley, oregano, garlic, salt, pepper, onion and paprika, sometimes with vinegar for a little added bite, that’s served with grilled meat and sausages. But this is a condiment that can be varied in many signature ways with ingredients like chiles or cilantro, and it can be used as a dipping sauce, sandwich spread or burger topping, or mixed into salad dressings, mayonnaise and other products.

Churrasco: If you had to pick one cooking technique that characterizes South America, it would have to be grilling. Churrasco is a Spanish or Portuguese term for grilled meat. It is a specialty of Argentina, where it often takes the form of a steak or mixed grill served with chimichurri, and Brazil. Brazil is also well known for its rodizio, a feast of skewered, grilled meats, that are brought to the table, one or two at a time, until the customer hollers stop.

Churrasco-style specialties and chimichurri sauce may represent one of the easiest entry points for South American menu concepts. According to Bill Mitchell, senior director of national program development for Sodexho, the company’s “4 Seasons of Flavor” Limited Time Offer series recently included a number of popular South American inflected items including a Chimichurri Angus Burger and a Chimichurri Flank Steak Sandwich.

Dulce de Leche: This is typical of the appeal that the food of Brazil and Argentina could hold for Norteño diners.

Brought to South America by Spanish and Portuguese immigrants, dulce de leche is a caramel-like candy whose name and flavor have flown into mainstream consciousness thanks to desserts such as Cheesecake Factory’s Dulce de Leche Caramel Cheesecake and Haagen-Dazs ice cream.

Empanadas: These stuffed pastries, baked or fried, are known throughout the Latin world, where they are often eaten as snacks. They can be filled with almost anything, from beef and chicken to ham and cheese, potatoes, or spinach. Empanadas also lend themselves well to dipping sauces.

Feijoada: For more than 300 years, feijoada has been the national dish of Brazil. This hearty stew of black beans (known as feijão), pork and beef, including sausage, is served with rice, chopped cooked collard greens, and sliced oranges, as well as the lightly roasted cassava flour known as farofa.

Where Hispanics go, good food follows. The cuisines of the Spanish-speaking islands of the Caribbean are a case in point, fusing the techniques of Spain and Africa with typical local ingredients such as rice, beans and peas, salt fish, pork, plantains and coconut, and a rich array of spices including allspice, garlic, cinnamon, nutmeg, bay leaves, cumin and chiles.

With a patient and employee base that includes Cubans, Puerto Ricans, South Americans and Haitians, the foodservice team at Miami’s Cedars Medical Center prepares a lot of different Hispanic specialties. According to foodservice director Robert Notte, “The food that’s an absolute must here is pureed malanga,” a soup made of the potato-like malanga tuber. “We serve it every single day. It’s as important as chicken soup is to the Jewish culture.” Other favorites include Spanish roast pork with black beans, Cuban-style pork chunks, churrasco steak (grilled and served with cilantro and mojo), ropa vieja (beef simmered in criollo sauce with peas until it falls apart, resembling “old clothes”) and boliche (a kind of pot roast).

Oxtails and suckling pig: Some of the more unusual dishes include oxtails stewed with lima beans (a Haitian specialty), bacalao (salt cod), tamales en cazuela (a cornmeal and vegetable tamale), pastelon (a lasagna-like casserole where plantain is used instead of noodles), and roast suckling pig, which is served in the doctor’s lounge twice a year. “Customers line up for these things,” explains Notte. “Anyone who’s lived in Miami for any length of time is familiar with this food.”

Down Mexico way: Other cuisines that bear exploration those of regional Mexico. The Veracruz region of Mexico, in particular, is rapidly becoming more familiar to Norteño diners, in part thanks to its reliance on fresh, simply prepared seafood. The food of Oaxaca, in the south, meanwhile, is also becoming more well-known. The region is known as “the land of the seven moles,” with its elaborate specialties of mole amarillo (with amarillo chiles, avocado and chayote); mole negro (with chocolate and chilhuacle chiles); coloradito (with red costeño chiles); verde (with tomatillos, nuts and green chiles); rojo (with pumpkin seeds, raisins and tomatoes), manchas manteles (called the “tablecloth stainer,” made with fruit and tomatoes); and chichilo negro (blackened chiles).

“We have experimented with moles in the kitchen, although at this point there are still a number of hurdles to preparing them at the unit level,” notes Francesco Esposito, director of culinary development for Aramark’s Innovative Dining Solutions.

Sweet bread challenge: Take the torta, an authentic sandwich that has its origins in the vibrant street food culture of Mexico. The Innovative Dining Solutions team spent considerable time researching this hearty specialty, then translating it for audiences within its business, university and healthcare accounts. Made to order at a grill station, the tortas—in both carne asada (beef)  and ancho pork versions—were introduced in summer 2006 as part of the company’s Club Fast-Track promotional program, and were very well received, according to Esposito.

One of the challenges to developing the torta was getting the bread right. Traditionally, a torta is served on an oblong, 6- to 8-inch firm sandwich roll, called a bolillo or telera, which is slightly sweet. “They’re not easy to get outside of ethnic areas, but we needed something that would be available nationwide to make it easier to implement the program,” explains Esposito. So he created  a speed-scratch version that uses Aramark’s existing dough product.

At Feather River Hospital in Paradise, Calf., chef Ira Poritzky introduced an Eating Around the World program with a different international menu every week. Available in the open-to-the-public café, the menus have attracted patronage from the local community, in addition to hospital visitors and staff. And for Poritzky, the program is an opportunity for him to be more creative.

“South American food has a lot of European influences. I’ve done menus from Argentina and Peru, which have been very well received by customers. I got many of these recipes when I worked at the Mayfair House Hotel in Miami. Not only are there are lot of South Americans living and working in Miami, but many visiting South Americans start their vacations there, so it was a great opportunity for me to learn about South American cuisine.

Many of the dishes for the Argentinian menu show a lot of Italian touches. For instance, the farmer’s style stew, which I adapted into a soup, includes sweet potatoes, corn, garlic, cumin, raisins and fresh peas. The real twist is fresh pears; when you cook firm pears, their sugars develop and add a very interesting flavor.

We also prepared a typical Argentinian grilled flank steak, which was marinated overnight in olive oil, lemon juice and garlic, then grilled. As a side dish, we prepared a vegetable gratin that has a lot of Italian flavors and ingredients, such as zucchini, bell peppers, basil and Parmesan, layered in a paté mold and baked with bread crumbs and other ingredients. It was a nice accompaniment to the simple grilled steak.

The dessert was Milhojas Argentinas, which is a milk custard, layered Napoleon style with puff pastry. South Americans have a real sweet tooth, as you can tell from this dessert. I added a few twists to build the flavor, like grilling the pineapple.

I’ve been very surprised by how well all of the international menus have been received. Because it’s a regular program, the customers’ curiosity is piqued—they are waiting to see what the next menu will be. If I serve something especially unusual, I make it easy for people to try the food. I’ll give them tasting spoons and encourage them to at least try it. If they don’t like it, they haven’t risked anything, but if they like it, then they’ve learned something new about food. We’ve got a lot of meat-and-potatoes patrons, but I would say that about 90% of the customers who come here have proven themselves to be pretty adventurous.”