Fruit salads have a new look these days. Chefs are grilling, pan-frying and even smoking fruit. Sometimes they’re tossing in out-of-the-ordinary ingredients to create a fun salad rendition of a classic recipe. 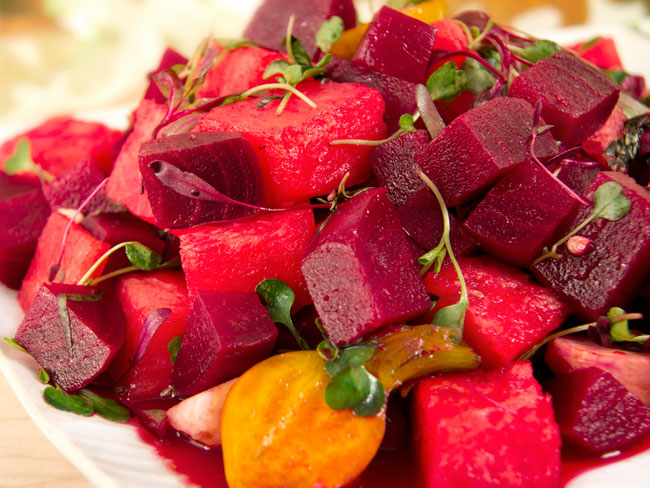 At Hoag Hospital in Newport Beach, Calif., for example, Executive Chef Sam Sellona offers the traditional Greek combination of watermelon and feta cheese. Sellona makes it his own by adding mint, lime juice and a bit of pitted, sliced kalamata olives.

“It’s a refreshing and totally different salad,” Sellona says. “When most people think of watermelon in the U.S., they think of just a wedge of the fruit.”

Sellona developed the dish while he was “messing around,” but after some refinement he prepared it at a cooking demonstration at Hoag’s Mary and Dick Allen Diabetes Center, where the chef teaches healthful cooking classes every month. Sellona and a hospital dietitian collaborated on developing the salad that in the end met both the chef’s need for taste and the dietitian’s health constraints, which “sometimes can be a battle,” Sellona jokes.

There was good customer response to the watermelon feta salad, Sellona says. He plans to add it to future menu rotations at the hospital.

Grilling grows: Angelo Spilios, senior director of Dining Services for Flik Independent School Dining at the Ethical Culture Fieldston School in New York, offers a similar watermelon salad with feta, but he adds honeydew and cantaloupe. Spilios also chars the melons before cutting them into chunks for a salad.

“This is a think-outside-the-box fruit salad,” Spilios says. “You have the coolness of the watermelon and the saltiness of the cheese, and it goes together really well.
“We grill the melon because it adds more flavor and it entices the kids’ palates,” Spilios adds. “The kids get bored easily. Plus, our school is based in Manhattan where [most] people don’t have grills,” so char-cooking is somewhat novel.

Spilios also grills fruit for an appetizer salad that he pairs with three separate pepper sauces. He prepares the sauces with yellow, red and green peppers. Students are offered the green bell pepper sauce, but Spilios spices up the sauce with jalapeño for adults, who are more receptive to the spicy heat, he says. To finish the grilled fruit starter, and to add some sour and sweet notes, Spilios drizzles reduced balsamic over the top.

For breakfast Spilios tops a yogurt parfait with a rendition of fruit salad. His morning mix includes fruits such as mango, star fruit and blackberries along with housemade granola.

Beet it: At San Diego State University a recently concocted watermelon and beet salad took off as a vegetarian option for a Meatless Mondays program at the school’s Faculty Staff Club. The salad satiates diners, according to the university’s Executive Chef David McHugh.

“It is sturdy and hearty enough as a main course,” McHugh says. Meatless Mondays flopped when implemented campuswide, the chef admits, because students didn’t like having their choices limited by force. The weekly vegetarian program, however, has worked well at the Faculty Staff Club, where it remains.

“We have a salad bar with fruit salad every day at the Faculty Staff Club,” McHugh adds. “The chef of the club, Mike Feil, can take anything and turn it into [any dish he chooses]. He has an herb garden that we manage right outside his door.”

Feil, who developed the beet and watermelon salad, says it “was somewhat of an experiment.” For his dish, he roasts standard-size red beets along with available baby heirloom varieties, such as candy cane and burnt orange. Once they are cooled, he peels and cuts the beets and tosses them with bite-size pieces of watermelon and a chiffonade of basil, cider vinegar, olive oil, salt and black pepper.

“The bite of the pepper and salt play well off the sweetness of the beets and watermelon,” Feil explains. “In some respects, it pays homage to our neighbors in Mexico where you see chile, salt and an acid, typically lime, added to fruit. We use black pepper instead of chile.

“Sometimes the simplest recipes are the best,” Feil adds. “The marriage between the earthy yang elements of beet is paired with the light and refreshing yin aspects of watermelon in this unique salad.”

Feil said he drew inspiration from France to create this recipe. “One of my favorite salads also involves beets and oranges,” he explains, recalling a classic French recipe.
Guest response to the beet and watermelon combination has been positive. “It has been overwhelmingly popular at the Faculty Staff Club here at SDSU,” Feil says.

The salad is made for special orders, but when it is prepared it is cross-utilized on the salad bar. While the employees enjoy the salad, Rankin finds her most popular fruit items are small, prepackaged portions of cut fruit. Her guests appreciate grab-and-go small containers that keep their serving size low.

When Aatul Jain, executive chef at Saint Clare’s Health System in New Jersey, was challenged to incorporate more healthful items onto his menus, he decided to change the way the department approached food.

“My director said, ‘Let’s change the way people think about hospital food,’” Jain says. “We decided to focus on seasonality, diversify our cooking techniques and highlight natural ingredients with herbs and natural flavors with minimal additions of sugar and salt.” Furthermore, a push was being made to modernize Saint Clare’s menu.

“Generally it seemed that people were bored of the usual fruit salad staples,” Jain says. “I thought, why not grill fruit for a lively vibrant grilled fruit salad? You get more flavor for those [people] who don’t get excited with a plain old pear. The average Joe wants to experience what’s chic, modern and happening.”

There is little added fat used when grilling, so the cooking style is considered healthful by many, Jain adds. “You rarely need oil or pan spray, if the grill is hot enough.

“Ideally, serve the [fruit] as they get made,” Jain adds. “The challenge with serving these fruits—especially berries—is that the grill and smoky flavor may be fairly superficial and as it sits in a refrigerator, the flavors may be lost in the juices that bleed out of cut fruit.”

Smoking hot: Grilling fruit led Jain to another extension: smoking fruit. To keep serving a seasonal fruit dish in winter, he’s thought of pan-searing fruit using a non-stick pan rather than a grill.

For a smoked fruit salad, he says a smoker or jerry-rigged smoking setup inside a grill or oven works well for using a standard soaked wood chip technique. Fruit takes on smoke flavors quickly, within about two to five minutes, he says.

Jain uses light and fruity woods, such as cherry, as opposed to a heavier wood such as hickory, and selects fruits that can stand up to the heat, such as apples, pears, slightly under-ripe peaches, nectarine, apricots and oranges with the skin left on.

Old becomes new: While a smoked fruit salad may sound like a thought-out plan, using fruit that was about to go bad was Jain’s impetus to start serving the modern salad.

“It started with a case of pineapple that had been sitting around our refrigerator for a week and we didn’t know where to use it,” he says. “The fresh-diced pineapple just didn’t sell. So, I cored the center, sliced it, brushed it lightly with agave and grill-marked it in a very hot charbroiler. Then I flash-cooled it and put it on a platter and served it at the salad bar.”

Jain recommends marinating firm fruit, like apples and under-ripe stone fruit, overnight in a mixture of honey and rum before applying heat. That marinade can be reduced and recycled as a glaze for cooking the fruit or it can be used to flavor drinks.

At the Lycee Francais de New York, a prekindergarten through 12th grade school in Manhattan, Flik Independent School Dining’s George Malchiodi, director of dining services took a company-developed strawberry and spinach salad and spiced it up as the season changed from summer to fall. That’s when he serves the salad with carambola, also called star fruit, mixed berries and organic Pink Lady apples. In addition to offering new flavors to the students, the director found that the fruit and spinach salad took on an added benefit: It entices the school’s students to eat more vegetables.

“The salad has a good mix. It’s nice and sweet, and people like it. I like the carambola because it’s a fruit that’s not seen that much, and it is not too sweet. I like the grapes because of the sweetness they add. You’ve got your savory, and you have some sweet with the grapes and a little sour because of the [honey mustard] dressing. The berries have a lot of antioxidants. The Pink Lady apples are organic.

There is a big push for organic now with Flik. Organics are becoming more popular, especially with the older people, like the staff.

We get reports every week of what’s in season [and we use that to adjust the salad’s combinations]. In the winter I use cinnamon [with winter fruits].

A lot of the kids don’t like to eat a lot of vegetables. If they see that the spinach is more of a salad than a cooked vegetable, they are more likely to eat it.

All around I think that the salad is a win-win. We had fun doing it. I really like the dish and it’s fairly simple to throw together. We have a fruit salad on the salad bar every day.”

The beet and watermelon salad from San Diego State. 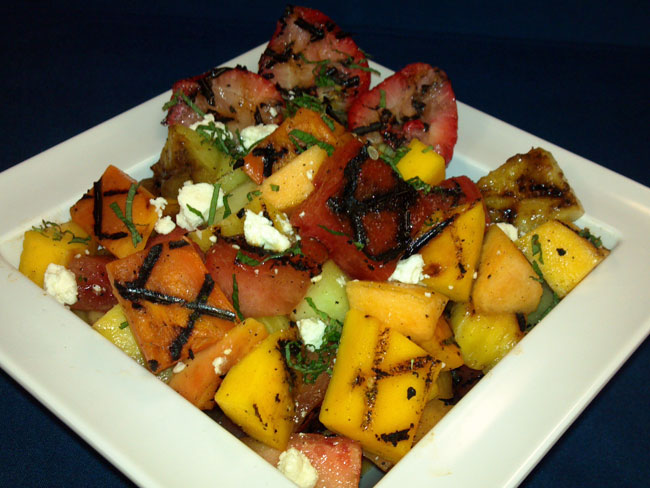 Grilled melon and feta salad from the Fieldston School.