The vast Mediterranean region represents a new frontier for the expanding American palate.

If it seems like more people are joining “Club Med” lately, you’ve been paying attention. In FoodService Director’s 2006 Survey of Menu Development, Mediterranean/Greek was named the most likely ethnic food to be added to non-commercial menus, as well as the number-two “hot cuisine” in 2006 (after Thai).

All this activity is likely to get a boost later this month with the release of "Principles of Healthy Menu Research and Development,” a report jointly authored by the Culinary Institute of America and Harvard School of Public Health, which will endorse the Mediterranean diet as a source for healthy menu ideas. With its focus on variety, freshness, and lots of fruits and vegetables, breads and grains, beans, nuts, and seeds—rather than large portions of meat and other animal products—the Mediterranean diet is right in tune with contemporary lifestyles and nutritional concerns.

The Med-Rim region represents a huge trove of different foods and flavors, from the delicate, fragrant cuisine of Morocco and Persia to the hearty, rustic specialties of Spain and Portugal—enough menu variety to keep customer interest high for years to come.

Traditional Middle Eastern specialties like falafel, gyros, hummus, grape leaves and pita sandwiches are all fairly well known to Americans without yet having gone mainstream like Italian, Mexican, and Chinese—leaving plenty of lesser-known dishes left to explore when your guests are ready. Familiar or exotic, Med-Rim items tend to be low in cost for both patron and operator. 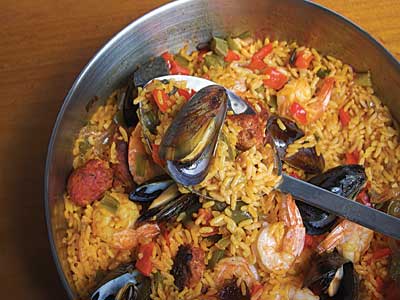 The foodcourt includes the Greek-Middle Eastern venue Santorini’s, whose menu—heavy on vegetarian items like hummus, tabbouleh, and Greek salad, as well as lean and healthy kebabs, souvlaki and gyros—fits USC’s Healthy Carolina program, an initiative designed to simplify healthy choices.

Because Santorini’s is an in-house brand, management also has the flexibility to adapt the menu and change out items in response to student demand. “We are able to test specials and limited-time offers like chicken souvlaki, which students had been asking for, without too much trouble,” notes Bremer. “And because we are able to cook many of the items on the charbroiler in full view of the customer, we get that impression of freshness and the pop and sizzle of an exhibition station.”

Platform for pop: As with other world cuisines, familiar Mediterranean dishes provide a platform for experimentation and introduction of new flavors with their own pop and sizzle.

“There is so much to explore,” says Ira Poritzky, chef at Feather River Hospital in Paradise, Calf., who recently introduced a weekly Dining Around the World concept in the hospital’s café.

“I’ve pretty much cooked my way around the entire Mediterranean region,” he adds, “from Greece and Portugal to Morocco and Northern Africa. Particularly popular dishes have included Greek Guacamole, Vegetarian Moussaka and Greek-style rice with feta cheese, spinach and black olives.”

Operators in other segments are discovering the versatility of Mediterranean. “(These) recipes include a lot of naturally flavorful ingredients, such as olives and olive oil, nuts, dried fruits, garlic, lemon and fresh herbs, so it’s easy to add a Mediterranean spin to neutral items like chicken,” says Eisa Shukran, director of dining services for Lackmann Culin-ary Services at Hofstra University,  in Hempstead, N.Y.

Special menus:  He also uses Mediter-ranean cuisine to address specialized menu needs. The  new Mediterranean Market in Hofstra’s Student Center serves as a kosher venue under rabbinical supervision. “There is only one small kitchen for the Market, so we had to choose between meat and dairy,” says Shukran. Although the station serves chicken flatbread sandwiches, kosher-certified corned beef, pastrami and pot roast, meatless items are dairy-free, appealing to vegans as well as those seeking a change of pace.

One of the real beauty parts of Middle Eastern and Greek cuisine is the simplicity of the menu, inventory and prep, which allows the food to be prepared in a relatively small amount of space with simple equipment—no fryers or additional hood space required.

Many items are prepped ahead (such as hummus and baba ghanoush) and served at room temperature, making them particularly appropriate for busy settings and grab-and-go sales, while cooked items such as moussaka and couscous hold up well on a steam table or lend themselves to microwave retherm.

Kebabs, gyros and souvlaki, meanwhile, can be cooked or finished to order on a simple grill.

Keeping service this simple, however, requires spot-on planning, especially when authenticity is part of the appeal. When management at Houston’s John P. McGovern Texas Medical Center decided to renovate its foodcourt dining facilities to appeal to doctors, interns, staff and others in the giant complex—which includes Baylor College of Medicine, Rice University, Texas A&M Health Sciences Center and the University of Texas M.D. Anderson Cancer Center—they turned to outside help.

Houston restaurateurs Tracy Vaught and John Watt, who own Backstreet Café, Hugo’s and Prego, were called in to develop and operate the chef-driven concepts, which replaced a number of chains.

Full complement: “When we evaluated the site, we noted an extremely diverse population, and because a lot of the customers are in the healthcare profession, we knew they’d be very health-conscious,” says Watt, a trained chef. “Because this was being positioned as an amenity for the medical center community, we wanted a high level of quality, but we were still looking for an average check of around $7 or $8. Reception has been tremendous, and all of the venues are now enjoying much higher traffic and sales.”

Because Watt and Vaught are most well-versed in Italian and Mexican food, they brought in their own outside expertise to design and execute some of the other ethnic menus, including Mark Oster, owner of a popular Greek and Lebanese restaurant in Houston called Kojak’s. Oster’s challenge was to create a menu for Salaam (which means “peace” in several different languages) that would satisfy a broad audience but be easy to produce from a small satellite kitchen.

10 questions, 10 answers: “The thing about Mediterranean food (is) you have all these traditional foods that are prepared differently in different parts of the region,” says Oster, citing hummus, baba ghanoush and tabbouleh—a kind of sacred trinity of the Middle East. “You ask 10 different people how to make hummus, and you get 10 different answers, depending on who you talk to, so you have to decide what your definitive version is going to be.

And then you have to make it attractive and easy to hold, because this is a display station where they can see the food right in front of them.”

Oster concentrates on quality and as much variety as possible. The eggplant in the baba ghanoush, for instance, is grilled before being mixed with sesame tahini and lemon, to give it smoky depth of flavor. Spices (including cumin, nutmeg, cinnamon and allspice) are all toasted and ground in-house for maximum freshness and flavor.

Rather than using preformed rotisserie-style gyro meat, which can be dry and inconsistent—and demands special equipment—Oster specs raw beef that is cut into strips and seared on the grill ahead of time, then held on the steamtable so that it can be quickly assembled into a fresh sandwich. The staff uses a blender for all its dips and sauces, to ensure a silky, well-blended result.

Shawarma is hot: The best-selling chicken shawarma is marinated overnight in pureed parsley, garlic, olive oil and onion. The day of service, the chicken is grilled to caramelize the exterior, then finished in the oven and held on a steamtable. To order, it’s sliced and wrapped in a warm pita with a garlic sauce (mayonnaise mixed with chopped garlic, lemon juice and other seasonings), lettuce and tomato, and jarred Israeli pickles. The same technique is also applied to skirt steak.

Oster could use a prepared sauce for his tilapia, but he prefers sautéing tomatoes, olives, capers and fresh basil in olive oil until the ingredients are thick and jammy. Either way, the sauce helps keep the grilled fish moist and attractive on the steam table.

“Mediterranean food is a great concept for a foodcourt,” says Oster. “With the right recipes and technique, you can produce really authentic food in a relatively small space.”

Foodservice officials at the University of California-Berkeley are eyeing development of a new retail outlet in a Social Studies building, and believe a Mediterranean menu would be appropriate since the clientele—mainly faculty and staff—tend to be more health-conscious than students. Many are vegetarians or vegans for social and/or political reasons. Ida Shen, assistant director and executive chef for CalDining on-campus, explains here how she’s putting the plan into action.

“The Mediterranean diet is focused on plant rather than animal proteins, including olive oil rather than animal fats such as butter and lard. The flavors are sophisticated but still familiar—lots of lemon, fresh herbs, fresh vegetables, grains and beans. Mediterranean food also fits in very well with the kind of produce we have available to us in California. We are fortunate to have access to many of the key ingredients year-round.

All of that went into our thinking, as well as the fact that the existing location is small, and has only one fryer—which will be vegan only—and one grill. So our protein selections will be limited to grilled chicken and sandwich meats; we’ll serve a few high-quality deli sandwiches to address the veto factor, but wrapped in pita or lavosh to give them a Mediterranean spin.

The more authentic items, such as kibbeh with pomegranate molasses, Quinoa Tabbouleh, Moroccan Carrot and Pepper Salad, and Eggplant with Yogurt, Onions and Mint, were inspired by Ana Sortun, the chef of Oleana restaurant in Cambridge, Mass., who spoke at a healthy eating conference I attended at the University of Massachusetts. I was very inspired by the flavors and freshness of the recipes she demonstrated.

Because we have organic salad bars at several other locations on campus, we already had a lot of the inventory, including things like grains, garbanzos beans (which go into the falafel and hummus), feta cheese, olives, and all sorts of fresh vegetables and leafy herbs. The hardest thing to source has been harissa.

We’re trying to make the recipes as authentic as possible. For instance, we will make the baba ghanoush (an eggplant spread) in-house. For the Turkish Carrot Salad, we toast and grind the spices for dukkah, a spice blend that you see in many different regional variations. We are trying to strike a balance between what’s authentic and what we can produce in this location.”