There's much more to Asian cuisine than usually meets the American eye.

It’s of little dispute that there’s more to Asian cuisine than Chinese food. With stir-fries and spring rolls almost second nature to American consumers, foodservice operators are beginning to plumb the depths of Southeast Asia, including Vietnam, Thailand and Malaysia.

“When we asked our student advisory committee and focus groups what else they wanted on-campus, the answer was Vietnamese food,” says Helen Wechsler, director of BC Dining at Boston College. In opening Tamarind Café and Sushi last September, Wechsler and her team made a concerted attempt to make the food as ethnically accurate as possible.

Tamarind’s menu features a number of traditional Vietnamese specialties, including pho noodle soup, “bun” noodle and green curry rice bowls, and vegetable spring rolls and fresh salad rolls. In addition, there is a variety of sushi (including raw salmon and tuna varieties), as well as Asian-inflected salads, pot stickers and satay skewers.

Starting out: “We have a diverse, talented kitchen, but this was the first time we tackled these flavor profiles and ingredients,” notes Wechsler. For the pho broth bases, Wechsler worked with Southeast Asian cooking expert Mai Pham and a local manufacturer to develop broths and sauces that would deliver authenticity that would be accessible for the quick-service venue.

With volume running up to 400 patrons a day, Tamarind is even more popular than expected. The BC Dining team spent more than six months from ideation to opening, including strict attention to utilization and production issues. The same meats for the skewers are also used to top the salads (a single vegetable and lettuce base, prepped in the main kitchen) and the noodle and rice bowls, for instance. Noodles for the pho are pre-portioned and held hot, then finished with a ladleful of hot broth and choice of protein topping. The same plate of condiments (which includes fresh herbs and chilis) customizes all the noodle and rice dishes. 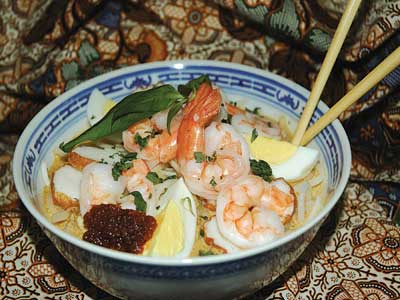 Theme nights: At Smith College in Northampton, Mass., Asian theme nights are one of the most popular options in the residential dining system, according to catering manager Betse Curtis, who created the menus and developed the recipes for the Asian program. Concepts have ranged from dim sum at dinner and pad Thai to an entire Korean night, in addition to the more familiar make-your own stir-fry.

Noodle bowls with dipped-to-order rice noodles and mix-and-match toppings and condiments are also very successful, says Curtis, who credits the foodservice team at the University of Massachusetts at Amherst for providing inspiration and resources when the program was added three years ago. “The bowls can really be customized to taste, and its great to see students with a big bowl of healthy but satisfying food,” she adds.

Authenticity was also the mission behind Sodexho’s Global Chef program, now entering its fifth year. “We created Global Chefs to leverage our presence in 80 countries worldwide, and to provide more authentic ethnic experiences in our accounts here in the United States,” explains Warren Jafarian, vice president, who developed the program under the banner of Sodexho Education Services. “We have 330,000 employees all over the world, with different cultures, skills and cuisine. Why not share that expertise?”

The 2006 chefs included two from Southeast Asia—Hak Joon Kim, national culinary trainer for Sodexho Korea, and Samarn Loychiam, national culinary trainer for Sodexho Thailand—as well as Falk Fehlhaber from Germany and Joaquin Suarez from Colombia. Suarez also serves as Sodexho Global Chef Program executive chef, acting as a liaison between the visiting chefs and host accounts. The team visited a total of 15 accounts during its stay in the United States.

Keen on Thai: Keene (N.H.) State College was one of the locations selected as a host for Thailand’s Loychiam. “We got a tremendous sense of what Thai culture is really like,” says Keene State Dining general manager Paul Paltrineri, who worked closely with the client, director of student life Paul Striffolino, to get the most bang for the buck from Loychiam’s five-day visit.

The visiting chef guest-lectured in a Food Culture class as part of the college’s nutrition program, and did a number of group and one-on-one sessions with foodservice personnel. Naturally, Loychiam also prepared and supervised a number of Thai specialties in both board and retail venues, including some dishes—such as ground pork patties in batter served with finely chopped cucumbers in a vinaigrette-like sauce—that most Americans would never taste.

“These weren’t dumbed-down for Western tastes,” says Paltrineri, who was particularly struck by the variety of flavors and the uniqueness of the condiments, including various chilies and fish sauce. “This was the real thing.

“There were a lot of magical moments” during the visit, he adds. “There were some language barriers, but they disappeared quickly. This made us realize that the international language isn’t love—it’s food.” 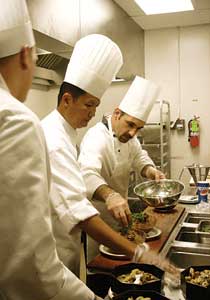 Looking for staff with the skills to ensure culinary authenticity? They may already work for you—or be your customers.

It stands to reason that the University of Massachusetts-Amherst would have great Asian food: the director is from Hong Kong, and the executive chef from Singapore. Then, too, Asians count for about 11% of the student population.

“It’s important for us to provide authenticity, variety and diversity for our customers with global cuisine,” says Ken Toong, director of dining services. “For a school our size, I believe we have more Asian offerings than any other.”

Customers can choose from many different Asian concepts, including:

“We have to keep offering more authenticity,” he adds. “The experience we have through Willie and some of our other Asian chefs helps us implement all of this delicious food.”