Nation’s top health agency now has a cafeteria operation that befits its mission, part of which is to promote healthy eating and lifestyles.

At A Glance: Centers for Disease Control and Prevention, Atlanta 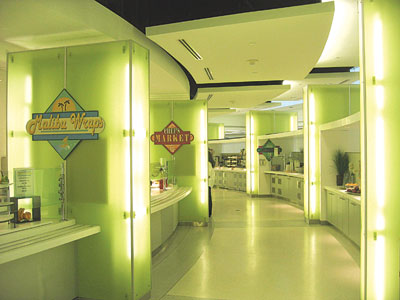 The Centers for Disease Control and Prevention in Atlanta, the nation’s top public health agency, has begun practicing more of what it preaches. In order to serve as a model for other government agencies and the nation as a whole to follow, the CDC (part of the Dept. of Health and Human Services) has revamped its cafeteria menus and expanded the use of produce carts around its campus. The moves come in the wake of the debut nearly a year ago of a $21-million, five-story building on the eastern edge of the CDC’s main campus. It includes a state-of-the-art fitness center on the main floor, which opened last June.

With 15,000 employees and contract workers and an $8 billion budget, the CDC’s mission is to investigate outbreaks of infectious diseases, study chronic diseases and fund a variety of measures that promote exercise and good nutrition. Since opening, its fitness center has reportedly been buzzing, as are weight-management classes, healthy grocery-shopping seminars, health assessments, walking programs and other activities.

Healthy eating: The CDC had used a local contract caterer to operate its dining facilities before switching to Guest Services Inc., based in Fairfax, VA, three years ago. The company operates two cafeterias at the CDC complex.

Each seats between 120 and 140. Guest Services staff numbers about 30.

Fresh emphasis: The cafeteria menus were revamped with an emphasis on fresh foods, according to Sam Ayoub, vice president of Guest Services. “We have also placed a lot of emphasis on the visual effect of the foods, on the food presentation,” he notes. “And of course with the renovations we try to maximize as much as we can variety of the foods.” 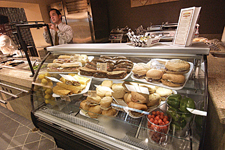 Guest Services revamped the menus for two reasons. One, management felt it needed to “bring about the latest trend in what we feel is important in the industry, and what we felt the CDC staff was demanding,” says Ayoub. He and his colleagues “had to keep in the back of our minds as we were revamping that we wanted to create an operation that would facilitate our ability to create more variety within the space.”

Another facet in the menu revisions was the contractor’s desire to introduce “a lot more” display cooking and menu items that are made to order.  Two more additions to the CDC dining rooms are a panini section and a salad concept called Caesar’s Corner.

Menu offerings, says Allen, have been enhanced with healthy choices “to provide a larger variety of fresh fruits and vegetables to allow patrons to make better choices.”

For example, the salad bar is stocked with only fresh fruits and vegetables. Soy milk and yogurt are offered, and low-fat milk and yogurt are available. Carrots are offered with sandwiches as an alternative to chips, and made-to-order omelets with fresh vegetables (even egg-whites only) are available for breakfast. A healthy hot entrée is menued daily, with full nutritional analysis available for consumers, and healthy commercial drinks and power bars are also available.

Total dining sales, including catering, were just over $1 million at CDC last year, says Ayoub. The average per-person check at lunch averages between $3.75 and $4.25, and there is no subsidy. Dining options on the campus, including weekly menus and specials, are advertised on the CDC’s intranet.

Sustaining costs: Food cost at CDC has risen by between 2.5% and 3%, says Ayoub. “We would like it to be between 38% and 38.5% [of total costs],” he says. “Unfortunately, we are in the 42% to 42.5% area.” The impact of gasoline price increases last year and issues dealing with produce production across the country, whether weather- or transportation-related, have kept costs high.

“Sustaining our food cost has been rather a challenge for us given all of these factors,” he adds. “The other contributor is that the consumer is feeling the pinch just as much as we are.”

To get that percentage down, Guest Service has begun a process of re-evaluating menu mixes. “We’re really trying to work with our vendors to see what products may be available to us that we can capitalize on outside the realm of our standard menu structures,” Ayoub explains. That can help the operator two ways. “One, if we can get a good deal from a specific vendor in a specific venue, we use that to help the customer by giving them what you would call a value-price structure, and at the same time help us maintain a relatively decent cost of sales. Then, by doing a lot of promotions and specials, we try to up the top line, which hopefully will help the percentages, particularly in labor and other controllable expenses.”

“We normally start this program during the second week of January or the first week of February,” says Ayoub, “then it goes until November, just before Thanksgiving.” The program has achieved “great results” in other parts of the country, he adds. “We have been able to generate additional revenue. Again, it depends on location and the size of the population, but on the average we’re able to increase business on the day that these promotions are featured anywhere between 10% and 15%.”

Management is also hoping to see an increase in catering business throughout 2007, especially in the new conference center. “If that does happen I think it would be a great help for us in that area,” says Ayoub. “It would help us generate a little bit more sales than we had anticipated.”

Catering currently accounts for 15% to 20% of total revenue. “Conferences are very big here,” he adds. “We hope we will see a lot more symposia and conferences.”