When a video of University of Connecticut student Luke Gatti berating a dining services employee over bacon-jalapeno mac and cheese hit the internet last fall, it became an instant viral sensation. In the immediate days that followed, 1.5 million people streamed the video on YouTube, and the world waited for the university’s response, says C. Dennis Pierce, executive director of dining services. And respond they did. 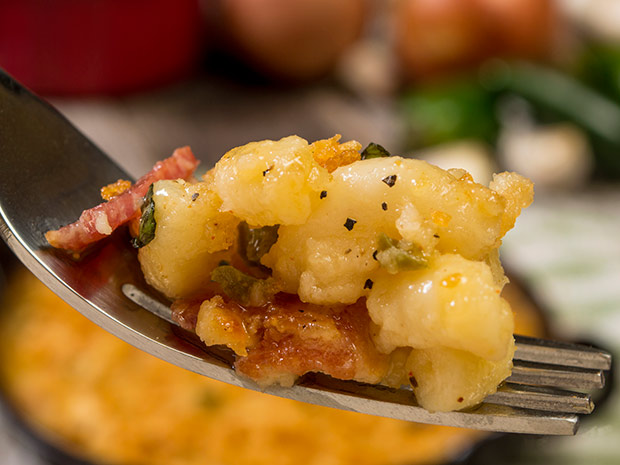 But Pierce and Robert Landolphi, assistant director of culinary development, took the time at last week’s NACUFS conference in Anaheim, Calif., to share with operators what happened behind the scenes—the decision-making process and details of the incident that didn’t go viral, or quickly were forgotten.

1. The incident happened during the dining services manager’s last day on the job

David Robinson was working his final shift on his final day as manager of UConn’s Union Street Market when the incident occurred. He was all set to join his wife for a new life in Ecuador. “In his mind was, ‘I didn’t want to do anything because I didn’t want to jeopardize my trip,’” Pierce says. That may have helped temper Robinson’s reaction, though Landolphi says that if a similar incident ever occurs, employees are encouraged to find ways to de-escalate the situation rather than engaging with the student.

Robinson refused to accept Gatti’s online apology, posted the day before Gatti’s court date. “You sat on a comfy chair in a comfy den in a comfy home and spoke to a camera. Was I in that room? Have you reached out to me directly? A heartfelt apology is directed at a human being in their presence,” Robinson wrote in a letter to UConn’s The Daily Campus. Gatti eventually flew to Ecuador to apologize to Robinson in person—a gesture that Robinson appreciated, Pierce says.

3. Protocol couldn’t prepare UConn Dining for the emotional side of the incident

While Dining Services’ policy is to immediately call police if diners are drunken and unruly, no one had past experience with the juggernaut of viral news. “I cannot relay to you emotionally what it’s like in the first week,” Pierce says. “There’s no way of closing the machine down.” The university took the position of confirming facts rather than reacting to online rumors, he says, although, “This thing wouldn’t go away. It kept coming back.”

Landolphi and Pierce say that creating both verbal and non-verbal instructions for another supervisor or lead employee are important in making sure authorities are reached in a timely manner—a wink, a nod or a hand gesture all are acceptable forms of communication. They also advise that employees avoid physical contact, repeat instructions to leave at least three times and be aware of their actions and emotions. When it comes to social media, employees are annually reminded to refrain from talking to the media without permission and funnel all communication through the proper, known channels, which is key to avoiding conflicting stories and presenting a united front.

Why the shift to delivery may not last