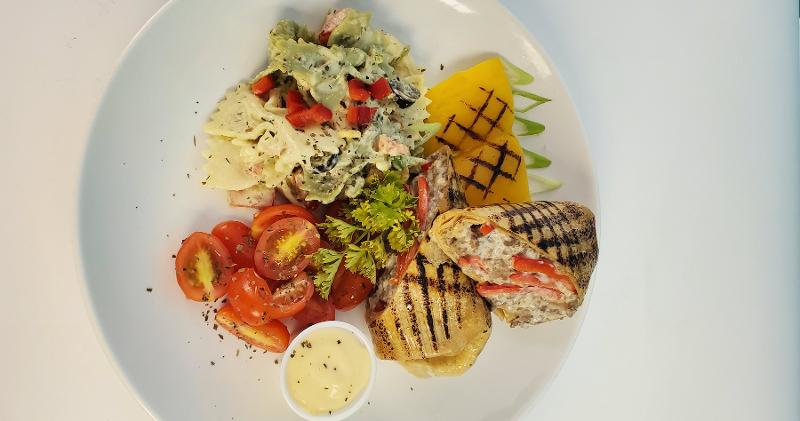 Photo courtesy of Meals on Wheels of Northeastern Illinois

Just a few years ago, Northeastern Illinois’ Meals on Wheels program operated like many of the nonprofit’s more than 5,000 chapters across the country: It delivered meals to local seniors but didn’t prepare the food it distributed.

Three hospitals and a few other organizations instead provided the meals, which tended to be of the stereotypical institutional sort.

On top of that, more area residents were requesting Meals on Wheels service, and the hodgepodge of entrees from various suppliers was becoming tougher to manage.

To address these issues, Executive Director Debi Morganfield was forming a plan for Meals on Wheels of Northeastern Illinois (MOW NEI) to go entirely in-house. It would require completely rethinking the operation, building a kitchen, investing in menu development—and a lot of other tasks that cost money.

So she tried something at the next evening meeting of the group’s board of directors.

“I got meals from one of the local hospitals, and as [the board members] walked in, it was like ‘Grab one and go have a seat,” Morganfield says. “They just looked at it. One woman actually said to me, ‘This is what we’re supposed to eat?’ and I said, ‘Well, it’s what we expect our clients to eat.’”

It was a sobering moment for MOW NEI’s board. And it worked.

Morganfield got to work scoping out potential foodservice directors, touring kitchen locations, spreading the word about fundraising and soliciting advice from Chicago-area restaurateurs.

One of those locals was Hecky Powell, a lifelong Evanston, Ill., resident and famed owner of Hecky’s Barbecue who also helped create MOW NEI in 1968.

Powell, who died of COVID complications in May 2020, never saw the MOW NEI kitchen built. But before his death, he made a comment to Morganfield that stuck with her.

“I told him about [the board meeting] and I said, ‘If we’re truly fighting food insecurity, our staff and volunteers should have access to this food. And if they don’t want to eat it, there’s something wrong with the food,’” Morganfield says. “Hecky said, ‘Yes, if they’re not stealing it, something is wrong!’ Such a funny little Hecky-ism. But it’s true: The food needs to be great because it’s about respect.”

In October 2019, Morganfield hired an FSD: Sam Landman, who brought culinary chops and a breadth of foodservice experience to the operation.

The team also found a sort of blank-slate location for its production kitchen, a space with a hood and very little else. Soon after, they began construction, with plans to build it from the plumbing up to create exactly what MOW NEI needed.

Construction was humming along. The group was chattering excitedly about all the people the new kitchen would allow them to feed in 2020. Then, COVID hit.

While much of the world went into lockdown and supplies including construction face masks dwindled, the kitchen build slowed a bit but ultimately continued, with Landman overseeing the site often. The kitchen was completed in April, passed inspection in May and opened on June 15.

“It was pretty crazy,” Landman says. “We had almost 100 people on our waiting lists, and we really worked hard to get the kitchen open as fast as we could to try and get some of these people fed. So that’s where it started. And it’s continued to be crazy since then.” 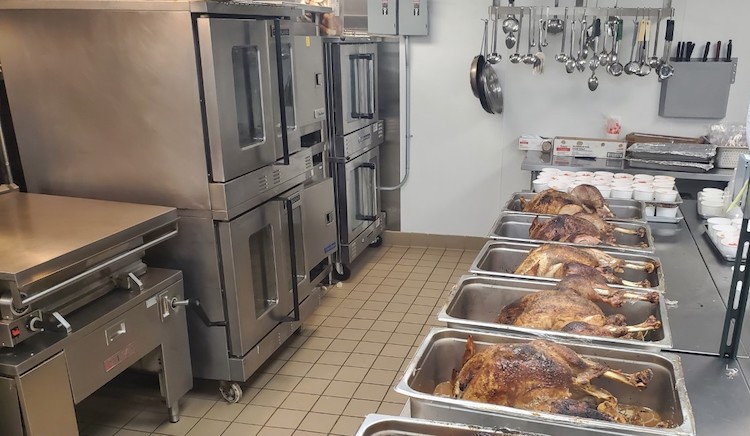 With a half-dozen full-time staffers and an army of about 50 daily volunteers—mostly drivers, with a handful on packing and kitchen duty—Landman and Morganfield have spearheaded a complete reinvention, serving between 200 and 700 meals each day.

Previously, the group simply delivered what they had on hand from their partner organizations: one hot meal for lunch and a cold dinner for later, with no choices given. Now, recipients have two options for each meal, and Landman created half of the new dinners to be suitable for either a hot or cold serve.

“We asked people what they wanted, and they said cheeseburgers, fried chicken,” Landman says. “I get that, but with elderly adults, is you know, nutrition is No. 1. So we thought, how can we give them what they want but pack it full of nutrients? How can we introduce them to some newer, trendy foods?”

Instead of a cheeseburger, Landman and his team created a turkey burger with Swiss cheese and aioli. There’s no fried chicken, but clients have loved lightly breaded chicken breasts stuffed with spinach and cheese. Trendier offerings include a wheatberry and butternut squash salad with cranberries and nuts, a cilantro-lime quinoa bowl topped with shrimp, salmon poke and a Thai chicken-peanut Buddha bowl. 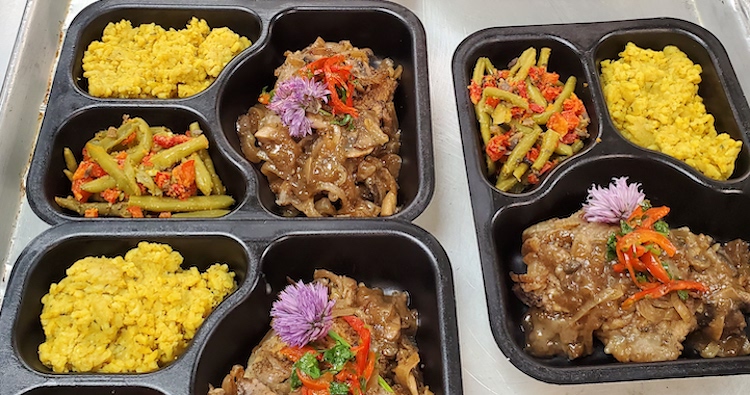 Photo courtesy of Meals on Wheels of Northeastern Illinois

The reinvention would be a feat in normal times, but during COVID, it’s been even more of a challenge. Landman credits his staff and the “angel” MOW volunteers with making it happen and keeping things running since.

But he’s honest about the staffing and supply issues plaguing MOW, along with most foodservice operations. Only five people applied for a line-cook position that’s been open for nine months—and none of them showed up for an interview. One week he can’t source frozen peas, and the next week, it’s brown rice.

And Landman has been working 12-, 15-, sometimes 18-hour days to make sure the people of northeastern Illinois are fed.

“I’m a perfectionist, but I’ve had to accept that sometimes you have to do the B+ job instead of the A job because it’s all that’s possible,” he says. “So for other operators, I get it. I would just remind them that sometimes they have to take a step back, take a break and do what you need to do to be able to breathe for a minute.”

He’s trying to take his own advice: After more than two years at MOW, Landman’s finally on his first vacation.

Honestly, it’s the volunteers. We couldn’t do it without them. Every volunteer who comes through ends up falling in love with what we do. It’s really rewarding and that’s why they keep coming back week after week. They love helping to serve their communities. 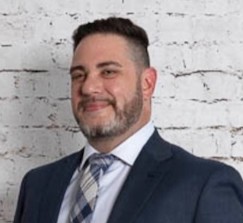 And they also love getting to sample stuff—because, of course, I don't just trust my own taste. I get second and third and fourth opinions, and since [our volunteers] are there, they're my taste buds, you know? So that's a little perk that they love as well. But it’s really about the fact of what we're doing, the mission that we have, that keeps them coming back for more.

To be able to feed even more people who are food insecure. I’d like to be able to expand our borders even a little bit more. In the Chicago area, the region we cover is Evanston, Skokie, part of Morton Grove, all the way to the Wisconsin border. If you look at the map, that’s a huge area.

But in the next year, I’d like to look to expand even further west and northwest because there are more people in need of food and who are food insecure, especially with the COVID challenges. I want to serve everyone we possibly can.

Nominate an FSO of the Month
menu  operations