When the federal Healthy, Hunger-Free Kids Act of 2010 was announced, Plymouth School District in Plymouth, Wis., was serving a menu of processed and some scratch-made meals that wouldn’t meet the new requirements.

“[The district] knew that they were going to have to do something to make sure that they were able to meet those standards, but they didn’t want to have to go to a very limited menu of everything out of the box,” says District Chef Caren Johnson, who was brought in to help introduce scratch-made dishes that were student- and Healthy-Hunger-Free approved.

Johnson got right to work incorporating scratch-made items onto the menu. She started small: The first addition was a homemade ranch dressing.

Instead of immediately adding full scratch-made entrees to the menu, chef Johnson and her team worked on changes that could be implemented quickly. Along with creating sauces and condiments, staff also began working on speed-scratch dishes that combined premade products with scratch-made items.

“We started taking an ingredient like popcorn chicken and then incorporating it into things like a mashed potato casserole where we made our own mashed potatoes,” Johnson says.

“I really had to say [to staff], ‘But it will be a better product, and it’s less wasteful and it’s actually more cost-effective too.’”—Caren Johnson

Initially, Johnson received some pushback from staff, especially when it came to swapping out easy-to-serve items—like the switch from preassembled peanut butter and jelly to homemade.

“That was a hard thing for the staff. They were like, ‘But they’re so easy. You just pull them out of the freezer,’” she says. “I really had to say, ‘But it will be a better product, and it’s less wasteful and it’s actually more cost-effective too.’”

The goal is to increase that percentage. But aging back-of-house equipment has occasionally made it difficult to attain. While a renovation is expected in the next couple of years, the state of the current kitchen has required staff to get creative for the time being.

“We have, many times, tried to do a lot of Asian dishes like stir-fry and we don’t have any sort of flattop or tilt skillet,” Johnson says. “But I do have a four-burner stove and a really big aluminum cake pan that we throw on top of it to basically make our own skillet.” 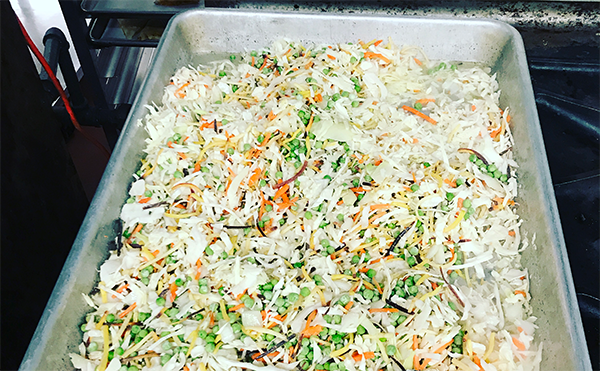 While Johnson says it is not an ideal setup, the makeshift skillet has allowed the district to serve scratch-made fried rice.

Another challenge to serving scratch-made meals comes from the students themselves.

“There still is the acceptability factor from students that are used to what they’re used to, and as our culture slowly changes hopefully that will change too,” she says, adding that she once tried to serve a homemade chicken nugget that was promptly dismissed by students. “They wanted the stuff that looks like it came from McDonald’s.”

Staff conducts taste tests with students to help pinpoint what menu items will do well. Students and their parents are also able to leave feedback on new items through the nutrition team’s Facebook and Instagram pages. Students, especially older ones, are always ready to share their thoughts, Johnson says.

“The biggest feedback I get is from the high school kids,” she says. “They are very honest and will come up and tell me what they like and don’t like, and what they want to see more of.”

Current scratch-made items that are popular with students include a pasta bar and an omelet bar, where they can choose which sauteed vegetables they want to be incorporated into the eggs.

“They wanted the stuff that looks like it came from McDonald’s.”—Caren Johnson

“It’s like if you were going to a Sunday brunch and you stand there and you tell the cook what you want in your omelet,” she says. “It’s not like we make the omelets and the kids then pile on toppings—we actually incorporate it in the omelet. If they want onion and peppers and broccoli, for example, we saute that up and make the omelets with them.”

Other operators looking to break into scratch-made should try to start small, Johnson says. Little changes can have a big impact on students and their parents.

“It doesn’t have to be that [operators] need to start making whole homemade scratch entrees,” she says. “Start with sauces and salad dressings and even salads in general. A little goes a long way. Even when we started [making our own ranch dressing], parents began to talk about it.”

Spokane Public Schools in Spokane, Wash., received a grant to help begin its scratch-made menu.  Three and half years ago, Empire Health Foundation, a regional charitable foundation, awarded the district $1 million to fund its efforts, which included training for all nutrition staff and implementation of a menu that included scratch-made options.

The district decided to split the training into waves and take things step by step, says Garrett Berdan, menu supervisor.

“We had managers go through in phases. We had a first wave of kitchens who wanted to be the pioneers into the program and so they were the first kitchens that went to scratch, and then we had training for the remainder of the kitchens,” he says. “Everyone by now has been training through the program, and so we’re continuing to plug along.”

The district’s latest push toward scratch-made is a new cafeteria at one of its elementary schools dedicated to producing meals in-house. When choosing what would be included in the new back of house, Berdan says that the team made sure to purchase equipment that would serve them well into the future.

Popular scratch-made items include pasta dishes and a creamy Thai chicken over rice.

“We use a sunflower seed butter as kind of part of the sauce and [that dish] comes together really nicely,” Berdan says. “It has great flavor.”

Approximately a quarter of the district’s menu is scratch-made. Berdan currently has a whiteboard full of ideas for potential additions to next school year’s menu.

“I’m thinking of … making hummus in-house and doing a sort of a hummus and pita or hummus and chips grab-and-go lunch item,” he says. “I’m also considering doing a housemade granola for our menu, which would be a great feature at all levels.”