After an antibiotic resistance-related health scare landed him in the hospital nearly a decade ago, Christopher Linaman got serious about eating antibiotic-free meat. So when he was hired a few years later to be the food and beverage manager and executive chef at Overlake Hospital in Bellevue, Wash., he knew he had to encourage his customers to do the same. 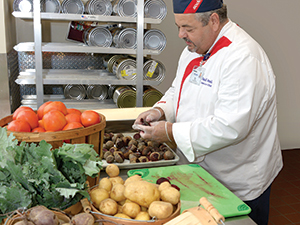 In mid-2013, Linaman started serving antibiotic-free deli meats. As more options, such as beef and pork, became available, he’d add them to his purchase list. Today, he’s proud to offer such items as grass-fed beef, tandoori chicken skewers and organic egg and ham breakfast sandwiches—all made with antibiotic-free proteins.

“In the last quarter of 2014, 60 percent of our meat purchases were antibiotic-free. For the current quarter, we’ll be closer to 70 percent,” Linaman says. Since most local farms aren’t able to match Overlake’s demand, the proteins are purchased largely from major vendors.

Due to higher product costs, the move has driven up retail prices—but not by much. “If a serving of bacon costs us 25 cents more, we raise the price [of an item] by that amount,” Linaman says. “Our pricing structure is still below market for our area, people still know they’re getting a good deal and they know where their food comes from.”

At St. Luke’s University Health Network, in Bethlehem, Pa., John Loughran, director of nutritional services at this Sodexo account, is focusing on cleaner vegetables. Last spring, the organization partnered with the Rodale Institute to open a five-acre organic farm at the network’s St. Luke Anderson campus, which fulfills 60 percent of the network’s produce needs during the growing season.

“We want to provide a wholesome product that’s fresh and locally grown, and move away from processed products,” Loughran says. And the changes are paying off: Loughran and his team have seen a 10 percent increase in customer satisfaction scores, with retail sales spiking by nearly as much.

Fortunately, the switch to organic hasn’t driven up retail prices. “In the summer, we spent about $20,000 on produce from the farm and reduced purchases from other vendors by $40,000, so it hasn’t increased costs at this point,” Loughran says. And while it takes longer to process farm-fresh produce than vendor-purchased items, having a farm on campus comes with plenty of perks. “We can talk to the farmer in the morning and see what she’s harvesting, and potentially change our menus based on that,” says Loughran. “Distribution is easier, too.”

At the University of Colorado at Boulder, Assistant Director of Culinary Operations/Executive Chef  Paul Houle scrutinizes packaged food labels. Houle, who’s already offered organic produce such as lettuce for five years, is working to switch out items that contain high-fructose corn syrup for those that are sweetened naturally.

He says he’d also like to get rid of as many pre-made mixes as possible, like swapping a bread base for flour to make a cleaner, simpler base in-house.
Although the changes may be small, Houle says he believes that they are part of a larger movement.

“There was a time when our food was cooked from scratch and we knew what was in it, then that went away for a while,” he says. “It’s refreshing to know that we’re coming back to that.”