Fresh, made-from-scratch menu items are table stakes for restaurants these days—they’re what customers expect from fast casuals on up. So how can operators meet that expectation when labor costs keep rising and the labor pool keeps getting smaller? The unemployment rate is the lowest it’s been in 30 years, according to the U.S. Department of Labor, and industry competition for skilled cooks is at an all-time high. 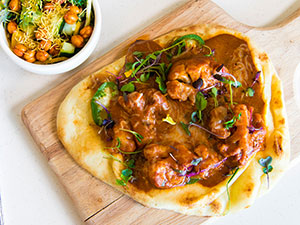 Simplifying the menu is one solution, finds Donna Lee, founder of Brown Bag Seafood Co., a fast casual with four units in Chicago. But simplifying doesn’t necessarily mean reducing the number of available menu items. The concept’s menu lists eight proteins to mix and match with six formats, including a salad, power box, taco, sandwich or entree plate. “We’re not training staff to do 60 different dishes, but with a limited number of SKUs and minimal mise en place, we offer 60 items,” she says. The proteins are seasoned and marinated in advance, and during the lunch rush, one employee tends the grill and constantly turns out cooked seafood. When orders come in, the job is mostly one of assembly, says Lee.

Brown Bag’s condiments, available at a separate sauce bar for guests to customize their order, are made in-house at each location, and every BOH and FOH employee is trained to prep them. “They’re mostly made ahead during our downtime between 2 and 5 p.m., so it doesn’t interfere with service,” says Lee.

The industry has long been predicting that Indian would be the next fast-casual trend, but the cuisine’s complex spicing and complicated sauces have been a stumbling block. Akash Kapoor, CEO of six-unit Curry Up Now, feels he is surmounting that stumbling block, and the restaurant company has recently begun to franchise. The secret lies in his family’s signature sauces.

“The menu lists 50 items but we make them all with just six sauces. The typical Indian restaurant has 20 or more,” says Kapoor. Curry Up Now started as a food truck, with Kapoor cooking up the sauces in a 10-gallon kettle. As the Indian street food concept caught on, he expanded to a commercial kitchen. But with a plan to grow his brick-and-mortar locations, Kapoor soon had to think bigger. “I partnered with a soup supplier who scaled up the sauce recipes. But it took two years for me to sign off on the project … to get the sauces right, with the same authentic, small-batch taste,” he says.

The tikka sauce is the most widely used across the menu, appearing in mashups such as tikka masala burritos and Indian poutine and flatbreads, as well as a more traditional chicken tikka masala bowl. The vegetables and proteins, including chicken, chickpeas, lentils and a vegan meat substitute, are all prepped by the lunch shift before each restaurant opens to maximize labor efficiencies so once the rush begins, the finishing can be done per order, says Kapoor. This strategy also avoids cross-contamination on the line, promoting food safety.

New York City-based Mercer Street Hospitality runs several independent restaurants, including Lure Fishbar and Burger & Barrel. Executive Chef-partner Josh Capon not only cross-utilizes ingredients within each menu, but he might also spec a housemade sauce or condiment between concepts. The bacon jam he created for his entry in the South Beach Wine & Food Festival’s annual Burger Bash is a case in point.

The recipe is a simple combination of bacon, Spanish onions caramelized in the bacon drippings, vinegar and thyme, that when spread on a cooked beef patty “gives a bacon cheeseburger the perfect bite every time,” Capon says. The Bash Burger was such a hit that it’s now a permanent item on Burger & Barrel’s menu. And the bacon jam often accompanies a plate of seared scallops or grilled fish at Lure. Training staff on one signature sauce allows cooks to shuttle between two concepts without losing a beat.