Mushrooms made up at least 25% of every patty used in the winning entries of a national competition to find the best blended burgers, but the similarity of ingredients largely ended there. The five top finishers, showcased Thursday night for media and the New York City food scene, incorporated such unusual riffs as beet ketchup, pickled enoki mayo and a wild-ramp bearnaise.

The blended patties that went into the winning sandwiches were also a kaleidoscopic mix. One chef combined New Zealand venison with Angus beef and hen of the woods mushrooms. Another mixed what its creator described as “New Mexico-style” brisket with roasted and minced crimini mushrooms. In most instances, the mushrooms used for the blends were locally sourced.

Toppings similarly ranged far and wide, from goat cheese to pulled pork, an herb and ancho mayo, and a corn fritter. And the buns varied from a sourdough soft pretzel to a jalapeno brioche.

The five featured sandwiches were the winners in the fourth annual flight of the Blended Burger Project, a collaboration of the James Beard Foundation, an institution dedicated to promoting American cuisine, and the Mushroom Council, a trade group for growers and processors. The competition aims to promote sustainability and health by showcasing burgers in which at least 25% of the meat ground into the patty is replaced by chopped fresh mushrooms.

Entrants not only develop a recipe for a blended burger, but then encourage customers to try the sandwich and give a thumbs-up by voting for it via the Blended Burger Project’s website. About 250,000 consumers cast a vote between Memorial Day and July 31 for an entrant in this year’s competition, according to a James Beard official.

The top 20 vote-getters were then reviewed by a panel of judges, who judged them on flavor, presentation and sustainability. The judges were Andrew Zimmern, the TV personality and author; Susan Westmoreland, the culinary director of Good Housekeeping magazine; and Antoinette Bruno, editor-in-chief of the StarChefs media group.

Here are this year’s winning entries, the restaurants that featured them, and the chef who developed each.

Described as “an umami bomb,” the Thai-inspired sandwich is built on Florida-grown mushrooms blended with beef and pork. The patty is spiked with ginger, lemongrass, cilantro and bird’s eye chili, and topped with what Basista calls “spicy Thai ketchup,” as well as a pickled enoki mayo, mushroom-cured egg yolks and smoked bacon. The toasted brioche bun is dusted with toasted mushroom. 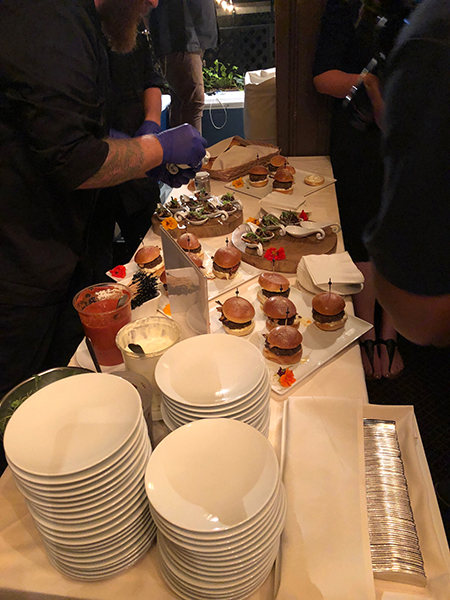 Moletz blended grass-fed beef with a mix of local mushrooms, roasted and minced, in a 75/25 ratio. The patty is garnished with goat cheese, pickled red onion, avocado and a spring mix. The Fox Chapel was priced at $13, a reflection of how reasonably mushrooms are priced in Pennsylvania, a major growing area, Moletz said.

Priced at $9 in the business and industry feeding facility, the venison-based sandwich also incorporates Angus beef and hen of the woods, a seasonal mushroom much in demand. The patty is chargrilled and seasoned with smoked sea salt, cracked pepper and powdered porcini mushrooms, and topped with Tilamook cheddar and a wild-ramp bearnaise. Robinson made a ketchup out of beets because of consumer concerns about high-fructose corn syrup and says most patrons can’t differentiate it from the familiar tomato-based staple. The foundation of the sandwich is a sourdough pretzel bun.

The name is Spanish for The Drunken Texan, and aims to combine what any Texan would likely eat at a backyard barbecue, explained Barrientos. The patty is a 70/30 mix of ground beef and mushrooms (shiitake, white button and portabella). It’s topped with pulled pork, a barbecue sauce and a corn fritter spiced with jalapenos and mushrooms. Barrientos adds a cilantro ranch dressing, pickled red onions and a queso incorporating mushrooms. 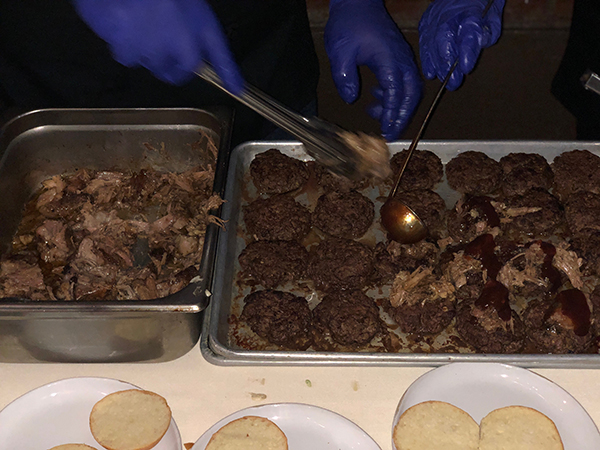 Roasted criminis and locally sourced brisket are blended into the patty, which is topped with white cheddar and local green chile, an herb and ancho mayo, bacon, a fried local egg and a slice of heirloom tomato. The pile of ingredients is served on a jalapeno brioche bun.