Focusing on breakfast foods that pop with flavor is an effective way for operators to engage today’s college students. These younger consumers grew up during a time when global ingredients and culinary themes enlivened the American palate, so bold, exciting flavors are something they expect. 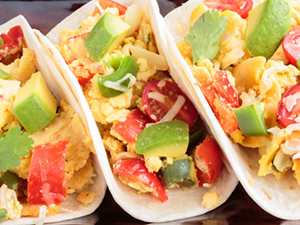 In fact, younger consumers are driving the demand for ethnic breakfast items, according to Technomic’s 2015 Breakfast Consumer Trend Report, and the call for more ethnic breakfast flavors mirrors rising demand for ethnic flavors in general. Thirty-five percent of consumers polled in Technomic’s 2015 Flavor Consumer Trend Report said they were more interested in ethnic flavors than they were the year before.

And ethnic-inspired breakfast items are a top 20 trend for this year, according to NRA’s What’s Hot 2016 Culinary Forecast, making these flavors a big opportunity for operators across all segments.

A taste for lively breakfast fare can be found in campus dining facilities across the country, according to Lisa Feldman, director of culinary services for Sodexo USA, a foodservice management company based in Gaithersburg, Md.

One way that Sodexo campus accounts answer the call is with a congee bar, which showcases the savory rice porridge and flavorful toppings that often make up a morning meal in China. “You can serve congee with an egg—which is one of the most delicious things ever—and add a little five-spice oil, cilantro and scallions,” says Feldman.

The University of Massachusetts, Amherst, also offers a congee bar, where the creamy comfort food may be flavored with chicken or pork.

Campus flavor consciousness has been driven in part by the ethnic flavor mashups that food trucks have brought to the food scene, Feldman says. Another influence is the rising enrollment of international students in American schools, which has led dining services to menu the characteristic tastes of their homelands.

The students of Marlboro College in Marlboro, Vt., are likewise buying into breakfast flavors in a big way. They enjoy zesty huevos rancheros and “bacado” omelets—bacon and avocado—all day and night in the campus retail dining outlet.

Another crowd pleaser is a millet, quinoa and oatmeal bar stocked with hearty cooked whole grains and toppings. “Our students are loading it up with local yogurt, fruit, nuts and seeds, syrup and even spices,” says Benjamin Newcomb, general manager of the Metz Culinary Management dining account. “People like to add cinnamon or even cayenne and some Indian seasonings.”

In fact, Newcomb has launched a “flavor station” of spices including steak seasoning, curry powder, garam masala, cayenne and red pepper flakes that can be added to all sorts of customizable menu items. “Students really like to add their own dash of this or that to their meals,” says Newcomb.

Marlboro also menus cornmeal pancakes with bacon-jalapeno syrup during breakfast. “The little bit of spiciness from the jalapenos goes really well with the smoky bacon,” says Newcomb. “Adding Vermont maple syrup brings it all together and definitely says goodbye to your standard flapjacks.”

Want breaking news at your fingertips?

Click here or text FSD to (877) 281-7554 to receive text alerts from FoodService Director and get the news and insights that matter to your operation.

The latest from FoodService Director, sent straight to your inbox.

Thanks for signing up!

Want breaking news at your fingertips?

Click here or text FSD to (877) 281-7554 to receive text alerts from FoodService Director and get the news and insights that matter to your operation.

The latest from FoodService Director, sent straight to your inbox.

Thanks for signing up!

Foodservice Operation of the Month

Learn more about our latest honoree.

Borrow innovative ideas and time-saving tricks from your peers.

Tune into FSD’s two podcasts, Dig In and Menu Feed.

Get exclusive industry content and explore new solutions from our sponsors.

5 stats on how dining habits vary by generation

Foodservice Operation of the Month