With the bonus of building morale and celebrating the department’s talents, 21 dining services personnel competed in the University of Southern California’s 2nd Annual Culinary Challenge, in December, to determine which unit chef would represent the university at the 2014 Pacific NACUFS conference. 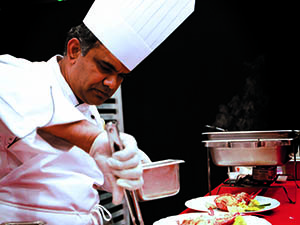 “I think that the most important thing that [the competition] does for us is re-emphasize the culinary and hospitality realm that we operate in with residential,” says Kris Klinger, USC Hospitality director. “Having a competition like this and watching these chefs compete and display their talent and having the winner be a resident chef is a huge eye-opener for some folks and boosts morale across the board.”

This year’s challenge was separated into two competitions. For the first section, teams of culinary department associates, including station chefs, culinary specialists and food preparation helpers, created original entrées that incorporated cultivated mushrooms. The second part of the competition focused on the seven competing USC unit chefs. Each chef was required to prepare a signature dish highlighting Maine lobster as the primary ingredient. “The biggest payoff [of the competition] is the development and training [of our staff], and the secondary payoff is camaraderie and teamwork,” says Eric Ernest, USC Hospitality executive chef. “The unsung hero of it is that we get to showcase our skills to the rest of the department and to each other, all in the vein of culinary exploration.”

Five judges, including the Food Network’s Rahm Fama and Penny Davidi, used criteria closely tied to the NACUFS and ACF certification process to determine the top three winners from each competition, scoring dishes for creativity, menu compatibility, nutritional balance, flavor and texture. Also new this year was the People’s Choice Award, which judged the flavor and food acceptability aspects of the competition dishes.

Rahzah Latour and Courtney Beavers, both of USC Hospitality’s McKay's dining outlet, were the winners of the first portion of the competition with their Umami Crusted Flat Iron Steak, Dumpling Squash with Wild Mushroom Gnocchi served with a Port Wine Sauce. They took home trophies, knife kits and books.

Chef Rajeendra Wanniarachchige, unit chef at USC’s Café 84, took first prize in the second portion of the competition with his preparation of Garam Masala Maine Lobster with Lemon Grass, Asparagus and Coconut Milk. Rajeendra will represent USC Hospitality at the 2014 NACUFS Pacific Conference. “Being in residential dining … we provide almost 2,500 people with food every single day,” Rajeendra says. “It’s very challenging, but I did prepare myself with help from other chefs, associate directors and my managers. It was a team effort.”

The event was hosted near the Los Angeles campus at the Radisson at USC. In addition to the competition, other activities included a vegetable and fruit carving demonstration, a knife demonstration and an interactive mushroom tasting station. The audience included various campus departments, students, associate deans and campus partners. “We had a lot of fun,” Klinger says. “The last day of classes was [the next day], so it really worked out, so we had a lot of folks there and a lot of students.”