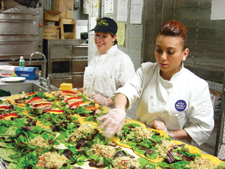 A former welfare grandmother who never held a paying job before is now a full-time employee in a bustling medical center kitchen where she’s known for her precisely sliced and perfectly wrapped portions of pastry. A young male employee with developmental disabilities covers for her on her two days off each week and can also mix cookie dough like a pro. Perhaps more importantly, he has become a “real team player,” according to his boss and mentor, the executive pastry chef.

It’s no secret that finding skilled entry-level workers is one of the greatest challenges in foodservice. Yet, some organizations are tapping into sources of such labor that shouldn’t be kept secret any longer. At least three operators in the New York area are doing just that to the great benefit of all involved, including many people like the ones described above.

Over the past decade, New York University Medical Center (NYUMC) has worked with Contemporary Guidance Services, Inc. (CGS), a not-for-profit organization providing services to adults with learning and developmental disabilities to enable them to lead productive lives. CGS programs include foodservice, hospitality and retail merchandising training. Throughout the years, NYUMC has trained over CGS 200 people and seen many hired by the hospital as well as throughout the foodservice industry.

NYU leads the way: Carol Sherman, NYUMC’s director of food and nutrition services, is one of CGS’ staunchest supporters and last year served as its 30th anniversary event committee chairperson. She generates enthusiasm for and commitment to the ongoing training program among her staff—including executive pastry chef Patrick Smet-Chevron, who has run the program at the medical center for the past eight years.

“Presently,” Smet-Chevron points out, “we have seven people from the program here for training. Their program runs for nine months, although some might start in a smaller facility where it’s less daunting, then come to us a few months later.”

When the students’ training is completed, the department tries to hire them if there are open positions at the time. Currently, there are two employees in the pastry shop, two or three in the kitchen, and three or four in tray assembly—all of whom are CGS grads.

“They all come from different backgrounds—perhaps they’re in drug treatment or they’ve been abused or have learning disabilities,” he continues. “You have to act differently with each one and consider where they’re coming from, but still treat them as a regular employee. The most important thing we need to teach these students is the work habit: to be on time; how to work with different supervisors; and to be positive. If I teach them only to make muffins, for example, but they get a job making hamburgers, not being positive won’t help them.”

Confidence catalyst: Organizations such as CGS often serve as the catalyst enabling disabled persons to build their confidence and nurture their skills. Another one, YAI/National Institute for People with Disabilities, was founded in 1959 as the Young Adult Institute. Like CGS, it offers training and support to disabled persons to prepare them and get them into a routine that enables them to thrive in a job opportunity. YAI also offers an on-site coach so that the employee can succeed in jobs many other workers might consider mundane, leading to high turnover.

The disabled often bring a more positive mindset to the table, officials say. “The disabled worker is often excited and motivated by this infrequent prospect of being given the chance to do something and take responsibility for the project,” says Michael Kramer, director of employment initiatives for YAI. “They have a desire for a sense of accomplishment—and the worker with disabilities is often incredibly loyal, hard-working and dependable. Once trained, they are extremely good at following repetitive tasks.”Summer crunch: Restaurant Associates Managed

Services has been drawing upon the disabled community for the past six years to fill positions at the annual U.S. Tennis Open in Flushing Meadow, N.Y. (Queens). In fact, last September it increased the number of its YAI employees at the Open from 35 in 2003 to more than 50. It was also a period of major employment crunch since the contractor was simultaneously handling its foodservice commitments at Madison Square Garden for the Republican National Convention.

RA has also hired some of these workers on a long-term basis at its Krispy Kreme commissary in nearby Astoria, and at a number of corporate cafeteria settings including Deutsche Bank, in Manhattan.

Aramark, through YAI, also employs several workers with disabilities for stocking, storage, distribution and inventory tasks at Shea Stadium as well as in foodservice at Long Island University’s Brooklyn campus.

With increased demand for unskilled, blue collar manual laborers, it is possible that YAI and its affiliate, The Corporate Source, could provide a company in a bind with anywhere from 10 to 20 trained and mentored workers primed for the job within two to three weeks, Kramer points out. “Furthermore, it’s been proven that the cost of hiring people with disabilities is less than the typical employment pool,” he contends.