The Black Hat chef program, one of the most talked about culinary training modules in healthcare foodservice, has become obsolete at Rex Healthcare, in Raleigh, N.C. But that’s just fine for Foodservice Director Jim McGrody; he’s already found something to replace it. 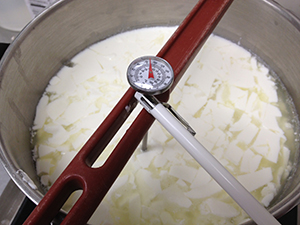 McGrody has created Discovery Sessions for his chefs and cooks. In a Discovery Session, a member of the culinary team can carve out some time during the workweek to learn a new skill that, ultimately, should benefit the department. Now eight months old, the program—which McGrody calls Black Hat 2.0—has allowed seven chefs to learn skills as diverse as making sourdough bread from scratch and refining charcuterie skills. Ten more employees are on a waiting list.

McGrody says the new program was born of necessity. “After about two years, our food culture started to change,” he explains. “Our reputation started to grow in the Raleigh market. We started getting chefs from the restaurant community who wanted to be part of what we do. I now have seven culinary graduates working with me. They’re extremely talented people and they already knew the stuff we taught in Black Hats. So that program became obsolete.”

Discovery Sessions grew out of a conversation with a team member during recipe development. “The chef said to me, ‘I wish I could do what you’re doing,’” he relates. “And I thought about it and said, ‘why can’t he?’ So I sat down with the chefs and asked them, ‘What do you want to discover about food? What do you want to learn that you’ve never had the chance to do?’”

Under the program, one chef or cook at a time works on a project of his or her choosing. Participants are required to keep a journal and in monthly meetings they talk about the experience. “It creates a culture of food speak,” McGrody says, “and it creates this energy in the kitchen. These guys can’t believe they’re getting paid to discover something they always wanted to learn.”

It also helps to build camaraderie, as chefs share knowledge with each other. McGrody talks about one chef who wanted to learn to make sausage. Another team member, who once worked in a sausage shop, served as a mentor.

“The biggest difference between this and Black Hats is this is sustainable,” he adds. “There are always things people want to learn, and always people willing to share their knowledge on those subjects.”