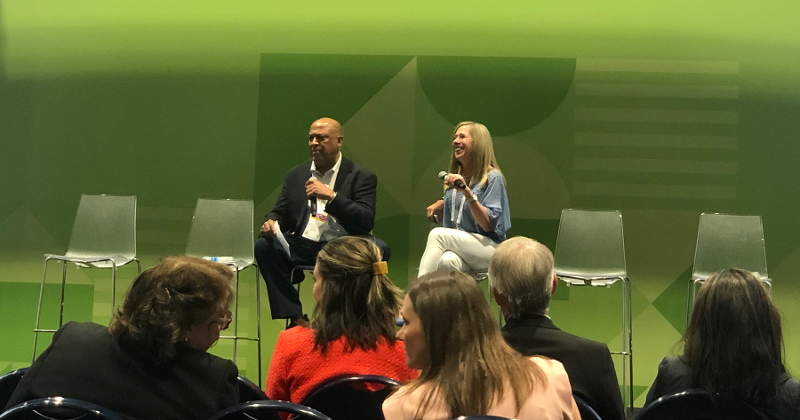 Diversity, equity and inclusion initiatives have only grown within foodservice since the last National Restaurant Association Show was held in 2019.

This year at the Show, several restaurant operators offered a look at how they’re expanding DEI initiatives and shared advice for how foodservice teams, including those in the noncommercial sector, can start or build upon their own DEI efforts.

Digging into the data

Launching a DEI program from the ground up can be daunting, says Sue Petersen, executive vice president of inclusion, diversity and people at Noodles and Co. So when Noodles began tackling how to incorporate DEI initiatives five years ago, the chain crunched some numbers.

“A group of folks from my team who are really passionate about this work unwrapped the data and recognized where we had, for lack of better term, low-hanging fruit that we could go after,” Petersen said during a DEI session at the show on Saturday.

Noodles’ data revealed that increasing the female representation in leadership roles would be a good place to begin. In response, the chain rolled out a program that offered women at the company opportunities for education, networking and more.

After the murder of George Floyd, Noodles also began hosting listening forums where employees could vent and share ideas about how the company could create a more inclusive community within its restaurants.

These forums were the instigator behind new initiatives such as encouraging team members to share their pronouns and converting the chain’s single-stall restrooms into gender-neutral ones.

It starts with leadership

As companies launched efforts to hear from employees, many also placed a focus on getting upper-level executives involved with DEI.

Creating a company environment that encourages employees to have tough conversations and share their thoughts begins at the top, President and COO of Union Square Hospitality Group Chip Wade said during a session on Monday.

Members of the executive team must show vulnerability and provide a place for staff to express their feelings, he says. In the aftermath of the recent supermarket shooting in Buffalo, N.Y., for example, Wade was on a routine call with Union Square Hospitality Group Founder and CEO Danny Meyer. Wade said he felt comfortable enough to ask Meyer if he could take a pause in their conversation and share how he was struggling with current events.

“To me, that's an environment that [Meyer’s] created,” says Wade. “Hopefully, as the president and COO, I’m doing my best to keep that dialogue and keep that openness going.”

Speaking out and standing firm

While employees may applaud new DEI initiatives their company rolls out, some guests may have a different opinion.

When Noodles launched its gender-neutral bathrooms, for example, a congressman who visited a Noodles location with his son was critical of the decision online.

“He posted on social media that he would never come to a Noodles again, and that he couldn't believe that we were forcing him to have this conversation about what that sign means with his 3-year-old,” says Petersen.

Instead of abiding by the rule that the customer is always right and going back on its decision, Noodles stuck with what it felt was best for employees and was vocal about why the company made the decision it did.

“One of the main reasons we converted our restrooms to gender neutral was for our team members, so we just told him, ‘Ok, thanks,’” says Petersen. “We kind of demoted him from a customer and said, ‘You don't need to come back.’”

3 stealable ideas to implement at your retail locations