As the Northeast braced for Winter Storm Juno, university foodservice departments in Massachusetts—one of the states expected to be hit hardest by the storm—were already prepared to keep their services running as smoothly as possible. Foodservice directors from Boston College in Chestnut Hill, Mass., and the University of Massachusetts in Amherst, Mass., shared information on how they keep students and staff fed during a major storm. 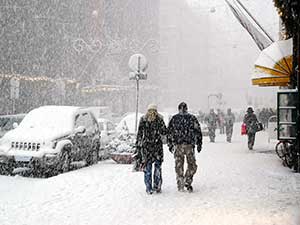 When a major storm is expected, it’s important to order enough food supplies to last two or three days, says Garett Distefano, director of residential dining services at UMass, so that service isn’t curtailed because of delivery delays.

Fortunately, in this case, the National Weather Service had predicted the storm days before it developed. This gave foodservice departments ample time to order enough supplies to last at least until regular deliveries resumed.

UMass ordered twice the amount of supplies that it normally does, in order to accommodate resident students. The school’s dining facilities remained open during normal operating hours and Distefano says that they had lots of “comfort foods” on the menu, such as clam chowder, for students and staff who stayed on campus.

“When we have a situation like this, we want to make sure that student life is maintained,” he says.

It’s also important to communicate with staff before the storm to let them know whether—and for how long— they will be needed at work, and make sleeping arrangements, if needed.

Both Distefano and Beth Emery, director of dining services at Boston College, asked just enough staff to remain on campus overnight so that they could hit the ground running in the morning. UMass housed its employees in its campus hotel, and Boston College set up cots in a dining hall for 30 employees who stayed overnight. As the weather improved, Emery’s managers planned to call in employees who stayed home during the brunt of the storm to spell their fellow workers.

Maintaining communication with staff also is a key component of a department’s contingency plans.

Emery met with foodservice managers prior to the storm to ensure that all staff knew what they were expected to do. The department also notified student workers via social media and campus fliers in order to bring in as much help as possible. “We reached out to all of our student [workers] to encourage them to give us a hand,” says Emery.

Even the best laid plans can be upended during a weather emergency, and so a department should remain open to changing course if necessary.

At Boston College, managers and staff were constantly in contact to efficiently address any issues that arose.

“We [were] planning on the fly, so if we had more people at one location, we’d move staff so that the three [open] locations were staffed evenly,” says Emery.

Emery’s staff also planned for potential any menu changes. For example, she says, on snow days hamburgers are one of the most popular items among students. If the department ran out of hamburger buns, Emery was prepared to use English muffins or even sub sandwich bread as alternatives.