Three years ago, the University of Maryland in College Park, Md., switched to an unlimited-access dining plan that allows students to enter and exit dining halls as many times as they want during operating hours. But they needed to find a new way to identify students with meal plans.

“Anytime we're open, [students] can come in and eat anything we're serving,” says Bart Hipple, assistant director of communications for dining services. “We need to make sure that the student we’re feeding is the student with the meal plan.”

The team turned to touchless biometrics, which requires students to run their hand over a scanner to gain access to the school’s four dining halls.

There was very little pushback from students regarding the new system, Hipple says. He thinks students accepted the scanners because staff took time to show them how they work.

The information received from students’ palms is housed in database separate from the rest on campus. Each semester, the dining team goes through the data and deletes the information of students who are no longer on a meal plan.

Maryland’s touchless biometrics system has been running smoothly since its debut on campus three years ago. And the team is always on the lookout for ways to incorporate more technology into its dining services, Hipple says.

“We're always looking to see what's next,” he says. “Students are early adopters of new technology in general.”

Students at Texas State University in San Marcos, Texas, don’t wave their palms under a scanner to get into the school’s Jones Dining Center, but they do have a tech-savvy way to order. The dining team installed ordering kiosks this year in response to trends resonating in the retail space

“We started noticing more kiosks in chains such as McDonald's and Panera and even at grocers, like Walmart and Target,” says Steven Granados, marketing director for Chartwells at Texas State University. “We want to make sure we're aligned with the market and we felt like [because] we have the audience—Generation Z students and millennials—this is the perfect environment for it.” 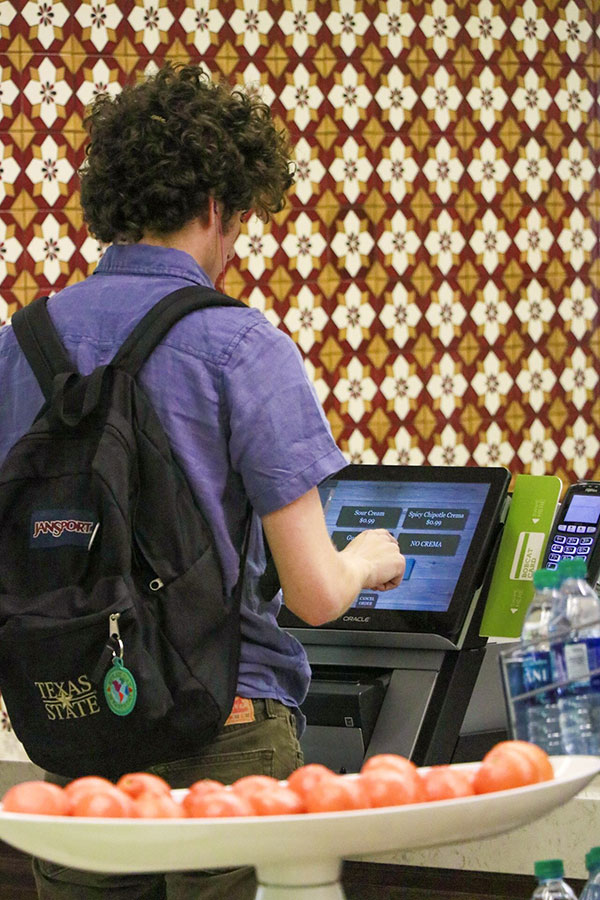 While some students ran into problems when the kiosks were first introduced, the new method of ordering came naturally to a majority of the student body. The transition was most difficult for faculty and staff. To help the older campus population make the jump to the kiosks, student employees who originally worked as cashiers became student ambassadors and were trained to operate the kiosks to help diners who ran into any trouble.

“Especially in the beginning, we fully expected questions, and we wanted to make it as easy a transition as possible,” says Director of Auxiliary Services John Root. “After the first week or so, there were no more questions or issues. It’s been running really smoothly.”

Making tech accessible to all

Operators looking to add kiosks should first make sure the machines are compliant with the Americans with Disabilities Act. That way, diners with disabilities can order without any problems, Granados says. He also suggests using images as descriptors on the kiosk screens to make ordering simpler and faster. Programming the kiosks to suggest add-on items or limited-time offers is also a good idea.

“It’s a great way to break the monotony for the students,” Granados says. “Maybe beforehand, they would just order the same thing from the cashier, but now if a pop-up prompt comes up at the kiosk, either before or after they choose their item, they may say ‘Oh, I can get something totally new for the same price.’”