Packaging emerged as a prominent challenge for foodservice operators during the COVID-19 pandemic—and sustainable packaging efforts appeared to take a backseat as restaurants worked to get food to customers safely and amid dine-in constraints, leaning on single-use takeout containers to do so.

However, as COVID concerns recede, sustainability has surfaced has a top concern once again, especially among younger consumers.

Some operators have responded to the demand for more sustainable options by introducing reusable container programs, or reworking their existing ones. Others plan to scrap single-use packaging altogether.

"COVID supercharged the world’s takeout habit and accelerated consumer awareness about the big mess it left behind,” said Natasha Gaffer, CEO of Foreverware, a reusable packaging company. “A recent report found that 55% of consumers consider plastic as ‘harmful,’ and 63% connect the material with ocean pollution. … Without viable packaging alternatives, scientists predict that plastics in the ocean will outweigh fish by 2050.”

Restaurant chain Just Salad has offered reusable bowls for in-store purchase since it opened in 2006, but last year, the brand launched its BringBack program, which allows customers placing orders via its mobile app to opt for a reusable bowl at no extra charge. 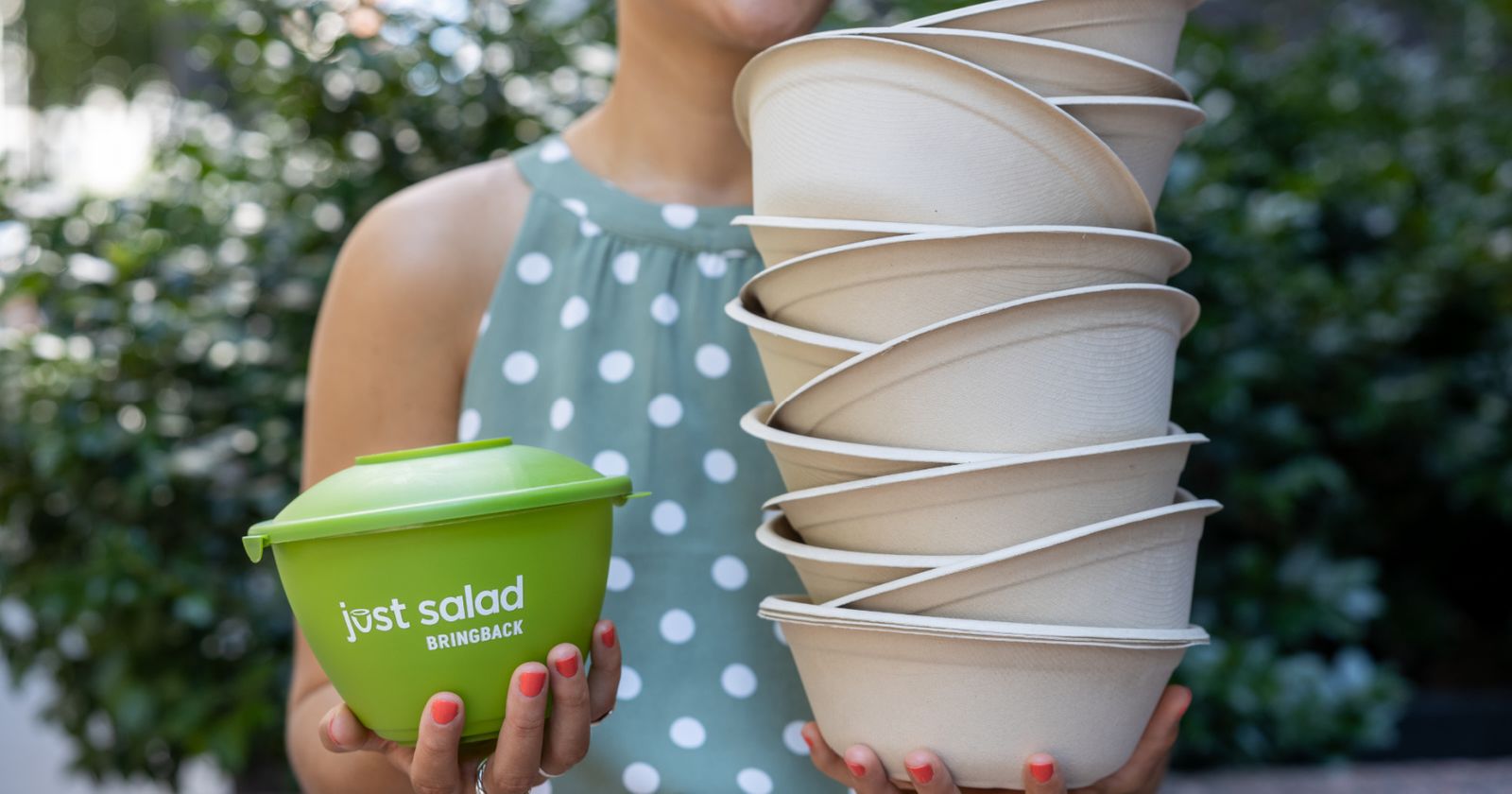 Unlike the containers for purchase, customers return the plastic bowl, and the restaurant takes care of cleaning and sanitizing.

Sandra Noonan, chief sustainability officer at Just Salad, said the new program is an attempt to make reuse more convenient. “Those who choose not to opt in, a frequent reason that they say is that it’s not convenient enough,” she said. “So, it’s really the responsibility of sustainable, circularity-focused brands to crack the code on reuse, meaning making it as convenient and rewarding as possible. I look forward to BringBack being a partial solution to that problem.”

In addition to ease, Noonan said both programs work to reward loyal customers for their sustainable choices.

Approximately 10% of store transactions use the original MyBowl program, she said, and customers who purchase a reusable bowl receive a free topping on their salad each time they bring it in.

“We have, definitely, a single-use culture,” she said. “Packaging is used for a matter of seconds or minutes, then thrown away. Every time you’re throwing that away, that piece of packaging, whether it’s a disposable salad container or something else, you’re throwing away all the energy, resources and human labor, by the way, that went into producing it.”

Operations can also run reusable programs through third-party companies, like Forever Ware, which currently partners with 16 restaurants and coffee shops throughout the United States.

Some sustainable packaging, such as compostable containers, is expensive and falls short of its goal, said Gaffer, Forever Ware’s CEO. “Owners are finding out they don’t actually get composted anyway, so they’re ending up in landfills. And what’s the point of offering a compostable product if they don’t have a positive impact and they’re paying three times as much as they would before?” 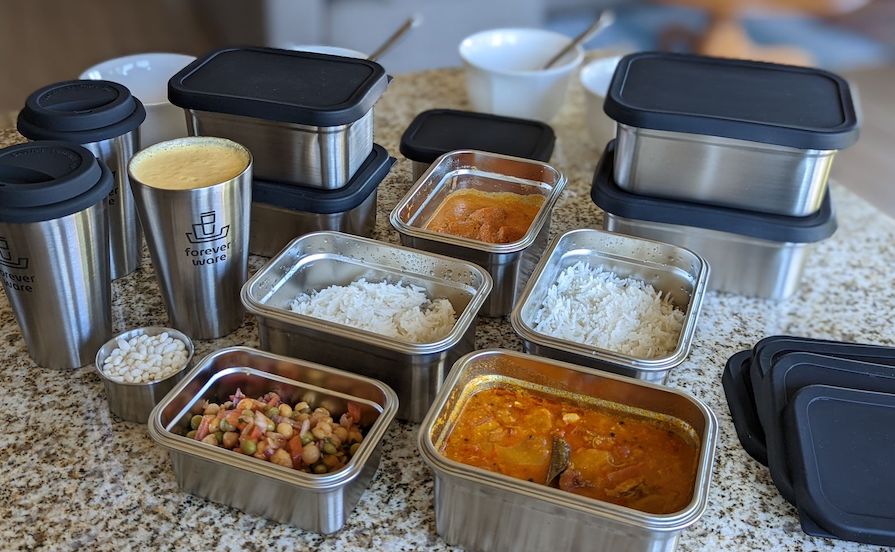 Forever Ware provides restaurants and coffeeshops with reusable cups, a smart return station and a phone to check the cups out. “We don’t require customers to do anything really except for ask for Forever Ware at the counter or select it when they order online,” Gaffer said.

Similar to other programs, Forever Ware provides a return incentive for customers: They put down a $5 deposit the first time they use a cup, which is returned to their account for a future order once it’s checked back in at the restaurant.

“We’re launching the program while we still have a few disposable sizes left,” said William Goodwin, owner and manager at Spoken Cafe. “We’re intentionally letting our disposable sizes wind down to sizes that aren’t necessarily convenient for most people.”

Goodwin said he plans on getting rid of disposables entirely once his current supply runs out. 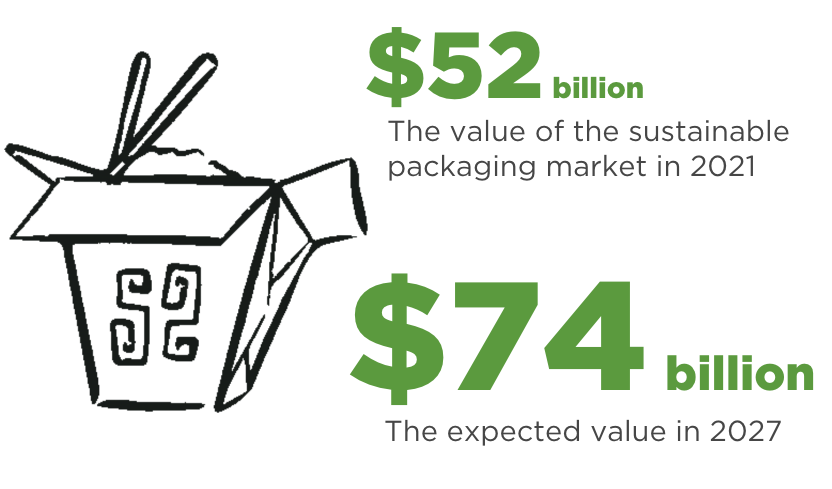 Spoken Cafe’s reliable customer base aided in the launch of the new program, Goodwin says, as he was able to discuss it with customers and suggest travel mugs as an alternative if they seemed hesitant.

“So through probably 8 months or so, with talking to customers about this, putting up signage, using social media, we’re finally in a place where we could launch it,” he said, noting that response to the program has been extremely positive.

The main concern he’s found is for customers who come in for just a cup of coffee to go and don’t plan on visiting the cafe again. “My response has been, eventually, that is not going to be an option,” he said. “We’re changing people’s habits and it’s not an easy thing to do. We’ve taken very gradual steps.”

The program has translated into cost savings, according to Goodwin.

“The price of everything has skyrocketed,” he said. “I have to carry multiple different brands and multiple different lids—the cost of all of this, including the additional labor that I have to put in, far exceeds the cost of Foreverware. The initial cost is $5 a mug and then the startup fees, which are just a couple hundred dollars, and every time a customer signs up, they pay the $5, so you immediately get your money back.”

Learning through trial and error

Despite the positives, implementing reusables can bring its share of challenges, as Northwestern University recently found.

As part of its sustainability efforts, Northwestern began providing reusable takeout containers to students in 2018. However, only 12% of those containers were being returned, said Krista Brown, sustainability and community engagement manager.

“Unfortunately, last fall, over 12,000 purple Ozzies were not returned and have likely ended up in the landfill, where they will take up to 450 years to decompose,” Brown said.

To address this issue, the university launched a new reusables program—this time, with a cost incentive. Students are enrolled in the program for free, but to stay in the program at no cost, they must return their to-go containers. If students don’t return their used container but want another one, they can purchase a new one for $7.

As of May, the return rate under the new program was 84%, Brown said.

Economic factors and consumer preferences have been obstacles for other foodservice programs as well.

Crista Martin, director for strategic initiatives and communication at Harvard University Dining Services (HUDS), said that reusable containers proved to be a better fit for residential dining programs than in campus cafes.

“When we first experimented with reusable containers, we did so in our campus cafes, which align sort of typically with quick-service restaurants,” she said. “We found that the containers in those settings were not the best choice because the population was transient. They were not there day in and day out.”

Additionally, students would often mistake reusables for garbage and simply toss them out, Martin said. As a result, Harvard instead focused on making the cafes fully compostable.

“The economics of it are not there yet in the U.S.,” Haneef said. “We need more options at high volume that are sustainable both in costs to run and operationalize and to the planet. And that’s a challenge. Most often, we find it to be cost prohibitive or we find ourselves making trade-offs.”