The foodservice operation at Florida Blue in Jacksonville, Fla., is seeing significantly reduced waste since adding three food dehydrators to its campuses in February of last year.

There are two dehydrators at the insurance provider's main campus and one at a downtown site, each of which are located on cafe loading docks. All food scraps from plates and food prep can go into them, as well as compostable takeout containers and servingware, says Damian Monticello, corporate hospitality services manager.

In addition, the material emitted from the dehydrators can be used as a soil amendment for Florida Blue’s compost pile or in its exterior landscaping. Down the line, it could potentially be purchased by customers who want to use it in their home gardens.

The only downside is that once customers take the compostable to-go containers away, the foodservice department has no control over them, he says, so they often end up in the trash. During the pandemic, all food has been served to go, so there’s a significant amount of composting that’s not being done, says Monticello; but on the plus side, around 300 people are on campus rather than the usual 7,000. Most of the food waste going into the dehydrators right now is food scraps from a program Monticello’s spearheading in collaboration with Feeding Northeast Florida and Project SHARE, which has been preparing meals for area seniors in need during the pandemic.

It was important to Monticello to reduce waste because a study at the business discovered that its kitchen and cafes produce the bulk of its waste. Each weekday during non-pandemic times, usually twice a day, foodservice employees add to the dehydrators, then turn them on. Employees can add up to 450 pounds of waste to each machine, and then, over several hours —usually around 19 hours for Florida Blue—its weight is reduced by 80%. For Florida Blue, that means slashing 34.6 tons of waste to only 6.9 tons over the course of a year.

Florida Blue doesn’t run the dehydrators until they’re full because they work better that way. “We load them at the top and hit a button, and then the next day we hit another button to discharge everything that’s been cut down,” says Monticello. During normal times, he runs them Monday through Friday, but for now, one runs daily and the other two run once or twice a week. 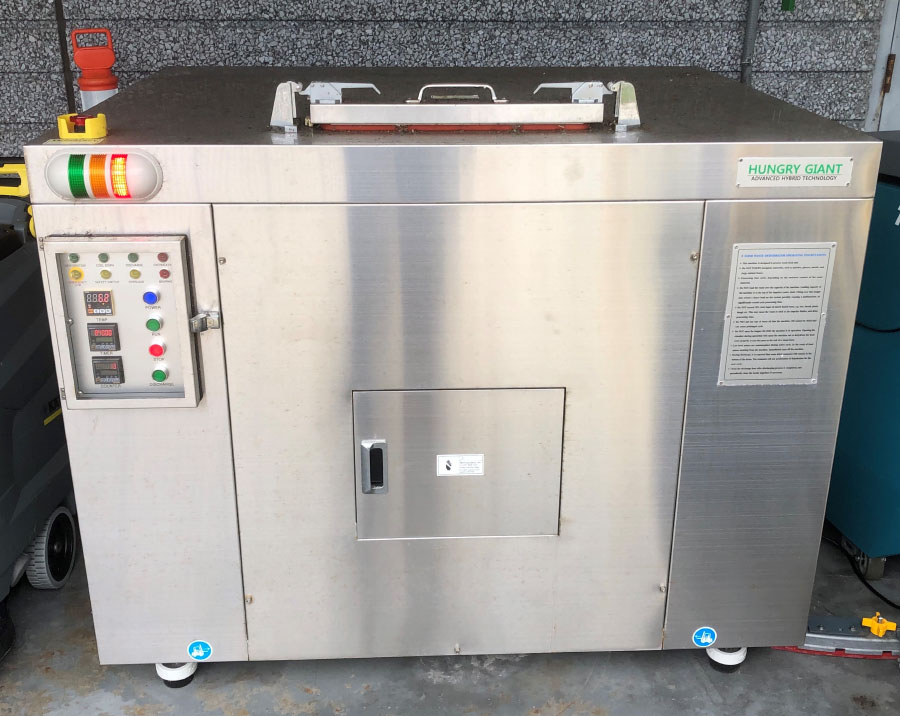 Florida Blue's foodservice department has slashed its annual waste from 34.6 tons to 6.9 tons with the help of food dehydrators; photograph courtesy of Florida Blue.

The dehydrators cost $65,000 apiece, and Monticello says he expects to see a return on that investment in about three years: “We could justify the cost because when you look at how much we put into the dumpsters and how frequently they had to be pulled and what we were being charged for that, we knew the units would pay for themselves. So it made sense from that standpoint, plus there’s the environmental piece.”

The equipment requires no extra labor and minimal training. “They’re quite basic,” Monticello says. They work by churning up the food waste and compostables then adding heat to cook everything down. Other versions he looked at used a lot of water to make a pulp, which “kind of defeated the purpose,” he says, due to all the energy required. The units are completely sealed so there’s no odor issues and just electricity is required for the heat, making them fairly energy efficient.

Switching from single-serve plastic containers to biodegradable items is helping Florida Blue eliminate an additional 4.75 tons of plastic from its waste stream per year, he adds.

How colleges are combating food waste with next-gen composting