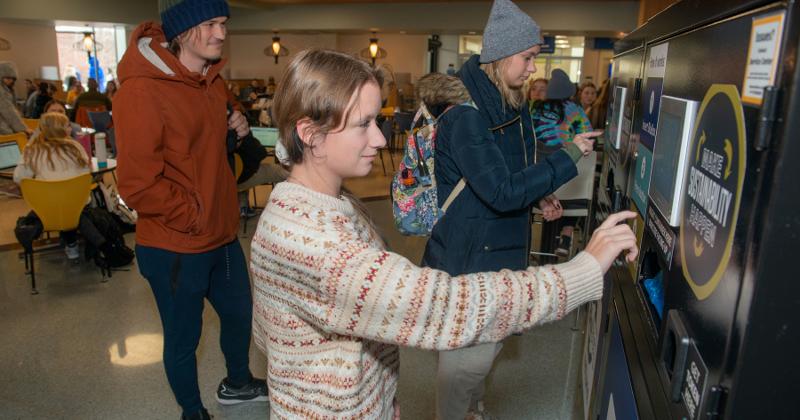 Since launching its BluBox program in 2021, the University of Wisconsin's Eau Claire campus has kept over 100,000 single-use containers out of landfills, says Lily Strehlow, sustainability specialist at the university.

Students are enrolled in the reusable container program for free—when they first arrive on campus, they are given a small token that can be used to “purchase” a BluBox.

Food is automatically served in BluBoxes at Davies Marketplace, one of the university’s main dining facilities. When a container is returned to a BluBox vending machine, a new coin is dispensed. If a student loses the coin or doesn’t turn a BluBox back in, they are charged $5 to get a new coin.

The boxes are supplied by reusable container company OZZI, but these ones come with a twist. Instead of the green boxes that OZZI typically produces, they were rebranded as “BluBoxes” to pay homage to the school’s colors and resonate more with students.

The goals behind the program are to cut down on single-use plastics as well as carbon emissions, Strehlow said, which supports the university’s larger goal to reach carbon neutrality by 2050.

“If you use the BluBoxes instead of single-use containers, even if it’s a compostable unit, you’re still cutting out the production and transportation of all of those containers,” Strehlow said.

While the program has proven successful in reducing waste, the dining team had to work out some challenges along the way.

One of those is how it’s introduced to new students, according to Andrew Solomon, Sodexo operations manager for BluGold Dining.

“I think the challenge that comes in is every year we have new students come to campus, and the program is not something they’re familiar with being in a high school, K-12 setting,” said Solomon.

The dining team notices more students buying back into the program because they lost their coin or container toward the beginning of the academic year, he said. As the year goes on, however, students become more familiar with the program. 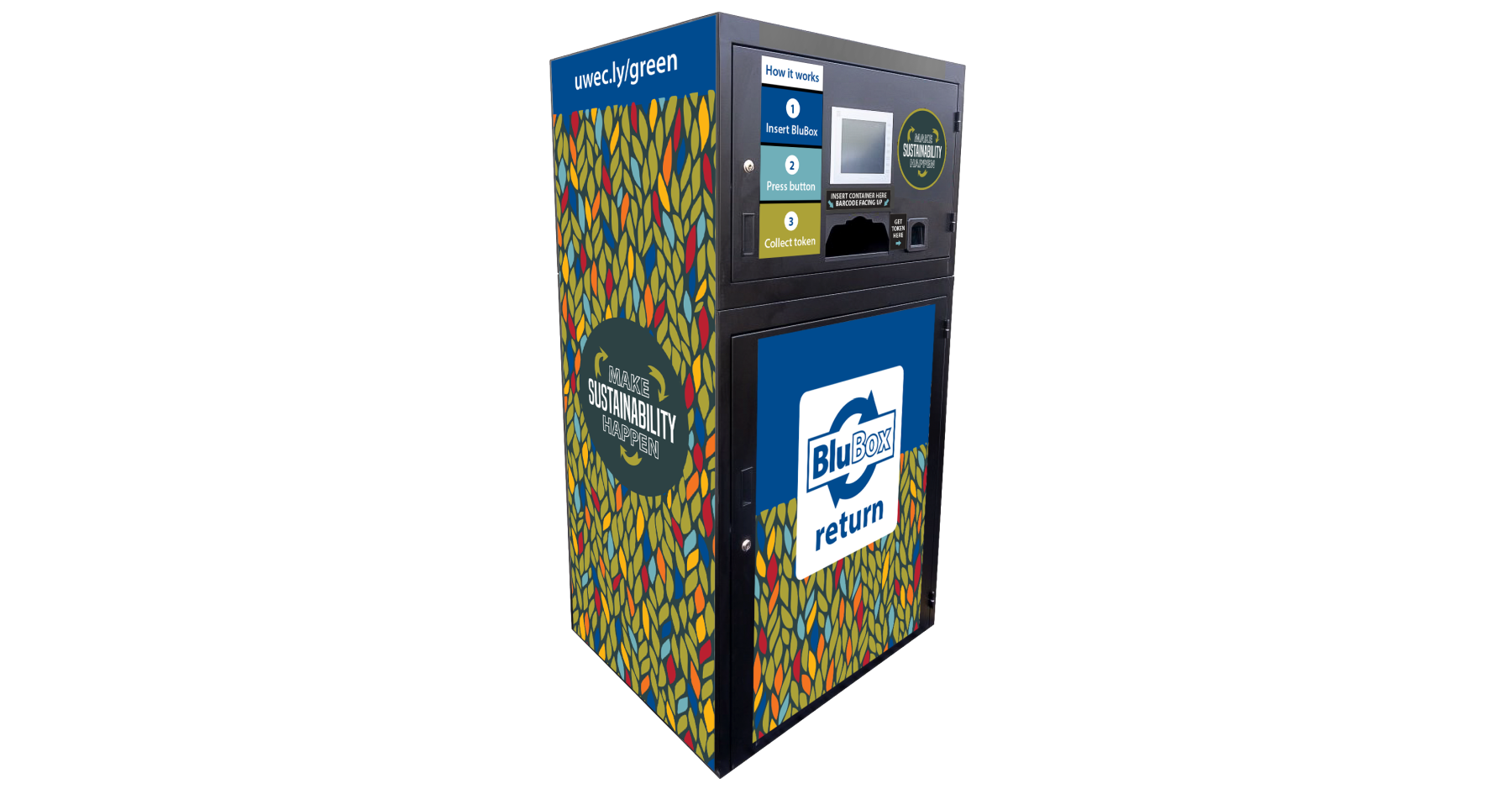 One way the team hopes to overcome this challenge is through a first-year training.

“It’s gonna be optional to start—we’re gonna incentivize it with some prizes and stuff like that,” Strehlow said. “The training is really designed to get students familiar with how the process works, so that they don’t forget their coin and have to buy back into the program.”

Looking forward, Strehlow and Solomon both said they hope to see the program expand to other campus eateries.

“We still have a couple eatery locations that are not using BluBox; I think it would be wonderful to expand into those places,” Solomon said. “Like we have a Sushi Do restaurant where, you know, there’s a really popular teriyaki bowl, and it would be nice to find the right size container to fit that food portion. So that students can go anywhere on campus and employ BluBox.”

In addition to reducing plastic waste, the BluBox program may also be making a dent in food waste.

Using reusable containers may encourage students to sort their food, Strehlow said, noting that with disposable containers, students would often pile their garbage into one container and simply throw out the entire thing, rather than sort through its contents.

“With BluBox, you can’t just dump the BluBox into the trash, you have to return it,” she said. “So, we’re seeing that a lot more students are taking the time to sort their waste.”

To determine BluBox’s impacts, a research team at the university conducted waste audits in the Davies Marketplace.

The team was made up of students Henry Scamehorn, Ben Young, Mark Fiore, Braedon Laundrie, Tucker Holloway and Cassidy Reitz, and led by faculty mentor Dr. Scott K. Clark. The group found that since implementing BluBox, single-use containers in the garbage decreased to nearly zero and mixed waste combos, or containers holding waste that belongs in multiple streams, also decreased.

“There was a massive spike in 2019 of mixed waste combos that we were finding when we were sorting through the different streams of waste. And then reaching 2021, and also in 2022 of the spring semester, there’s a dramatic decrease from that 2019 value,” said team member Young. He said the team attributed this decrease to the BluBox program, as there was less waste to be thrown away once it was implemented.

Additionally, the data suggested that a greater percentage of food went to the compost bin—and less into the landfill—after the program was implemented.

The research team also monitored students as they threw trash away to conduct a behavioral analysis. Their results found a split between students who try to sort their waste and those who don’t, according to Young.

“We have a population that tries really hard and then a population who might not know how to sort as well,” he said. “And so, that’s where this training will hopefully come in, to emphasize that this is how you sort. And we want to make people as comfortable as possible with the sorting.”

While Strehlow said that the data cannot be extrapolated to all of campus, it does highlight that some behaviors may be shifting because of the BluBoxes.

“It’s not exact data—we don’t do this every day, we don’t do this monthly, it’s only once or twice per semester, but it does indicate that we’re making progress specifically because of BluBox. We’ve tried different types of posters, and we’ve tried doing videos and stuff like that—students really don’t pay attention to that. But the BluBox really changed their behavior,” she said. “And we’re hoping that this new first year training when they learn how to use BluBox and how to sort waste is gonna be the next step in that.”