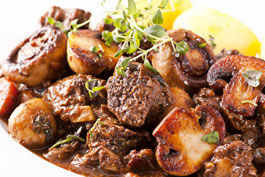 Data in Technomic’s College and University Consumer Trend Report revealed that students’ preference for French food increased from 23% to 28% between 2015 to 2017. A classic like beef bourguignon is a good way to introduce the cuisine to customers because it includes familiar ingredients such as mushrooms, onions, bacon and beef. Wine is used to braise the beef, but the alcohol evaporates during cooking.

3. Transfer meat to large bowl. Add onions and mushrooms to same pot and saute until light brown, about six minutes. Add garlic and saute one minute. Transfer vegetables to bowl with beef.

4. Add 1 cup broth and cognac to pot. Simmer until reduced to glaze, scraping up browned bits, about eight minutes. Return meat, vegetables and their liquids to pot.

5. Add wine, thyme, sugar, tomato paste and 2 cups broth. Bring to a boil, stirring occasionally. Cover pot and place in over. Cool until beef is tender, about one hour and 20 minutes.

6. Ladle liquid from stew into large saucepan. Spoon off fat. Boil liquid until reduced to 2 ¾ cups, about 40 minutes. Season with salt and pepper. Pour liquid back over beef and vegetables.