The kitchen at 450-bed University of Washington Medical Center in Seattle is, for the most part, a 1959 classic. But, upon closer inspection, one finds some fairly sophisticated equipment—with more on the way—that represent the most cutting-edge elements the industry has to offer. 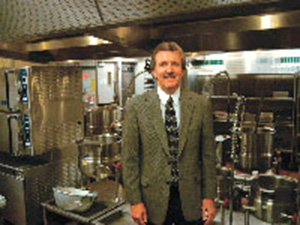 Much of this comes courtesy of Walter Thurnhofer, RD, LD, DHCFA, who came on board as director of food and nutrition services barely two years ago. Not unlike Superman, this mild-mannered operator—a veteran of 27 years in healthcare foodservice—turns into a persuasive and indomitable leader when the need arises.

Since taking the job, Thurnhofer has focused on foodservice equipment improvements in a number of areas, including steamer capacity, temperature monitoring, tray heating and, most recently, blast-chilling. “I found a department [at Washington] that was running quite well, serving 5,000 to 6,000 meals a day including more than 4,000 in the cafeteria,” Thurnhofer says. “There was a good staff, dietitians and supervisors, so it was more a matter of taking what we have and making it better and better.”

Streamlined steam: First on the agenda was steam equipment. With a budget of $350,000, Thurnhofer replaced three 40-gallon steam jacketed kettles with four new ones and added two 12-gallon and three 6-gallon small steam jacketed kettles—nearly doubling the facility’s convection steamer capacity. “The cooks were handicapped in producing huge quantities of food on old equipment,” he recalls. “During the eight-week long renovation last summer, they had to cook exclusively in the oven, on griddles and in fryers, and we had to rework purchasing and rewrite menus for that period of time.”

He also implemented a fully automated temperature monitoring system following the NAFEM Data Protocol (see Oct. 15, 2004, FSD, “The Networked Kitchen,” p. 20). Monitors are installed on every refrigerator—including all floor stock refrigerators—freezer and hot box as well as the dish machine. All told, there are now approximately 125 sensors in place at a cost of more than $100,000.
At this point, Thurnhofer can literally sit at his computer—in his office or anywhere in the world—and pull up current temperature, or temperature history, for each unit for the past year.

Hone on the range: “We’ve also set up some parameters such as a 33°F to 41°F range for refrigeration,” he explains. “If a unit is out of range for more than one hour, it sends an alarm to plant operations and if they can’t fix it, they notify us. Now, when Joint Commission walks in for our records, there won’t be any scrambling. They can just pop into our computer and find day-long documentation recorded at 15-minute intervals of what action was taken. It also documents non-functioning equipment and indicates the need for repair or replacement.”

A third area of improvement was meal temperature at time of delivery to the patient—made possible by switching from steel pellets (which radiate heat to a tray’s main dish) to an induction heat base system. Thurnhofer reports that complaints have decreased significantly and cut down on risk of injury to staff and patients.

“The old steel pellet system heated to 300°F and some employees have accidentally hit their arms on the insides of the heated units,” he notes. “Also, the base was still hot when the meal was delivered to patients and that was a potential danger. So the induction base is a significant improvement over steel pellets.”

Having a blast: Next on his agenda is integration of blast-chill equipment into the temperature monitoring system. Not unlike many foodservice facilities across the country, UWMC never had a blast-chiller before, a situation that Thurnhofer equates with “the elephant in the room” that no one talks about in the hope that food-borne illness will be avoided just by adhering to older methodology.

“You can’t properly cool pre-prep or leftover items quickly enough in a walk-in,” he contends. “Food will not be cold enough in four hours to prevent bacterial growth. Blast chilling is the only way to guarantee safety.

“We bought our equipment—with a big remote compressor installed in the basement—because it complies with the NAFEM Data Protocol technology [and] we can connect it to the data monitoring system. Now, when the cooks roll in a cart of grilled chicken and a cart of beef stew and set probes in each, I’ll have an automatic record of how long it took to chill down.”

Later this year, Thurnhofer plans to purchase hand-held temperature recording units that can be programmed with the menus for the day. With that in hand, a foodservice worker can walk up to the line, stick a probe into any item, and electronically record the temperature of every item checked. The hand-held units will help eliminate paper documentation and reduce human error—not to mention being “fun for the staff.”

Also on the drawing board is the transitioning of patient meal delivery to room service, which he expects to offer from 6 a.m. to 10 p.m. He estimates that once his proposal receives the go-ahead, the department will be ready to implement room service within six months—expecting to realize savings of 5% to 10% on food and supply costs as a result of reducing overproduction. However, the main objective—both his and his administrator’s—is to increase patient satisfaction scores to the mid-90s range.

Speaking of menus…: But even before transitioning to room service, he’s exploring implementation of the spoken menu. “It’s more real-time selection and for us that’s a key factor because we have two oncology units and those patients’ tastes change from hour to hour,” Thurnhofer points out. “I’ve met with their patient advisory group regarding making things more patient-friendly.”

Now, low-fat, low-sodium vegetarian choices are always offered and healthier cooking methods are utilized in the preparation of meat-based dishes.

The menu is also now translated into Chinese, Spanish, Russian and Vietnamese. “Because we’re a regional referral center, many patients come to us from other countries,” he notes. “Patients have responded happily plus we have created materials in those languages for the dietitians to use in teaching them about their special diets.”

He strives to make sure foods are menued that fit customers’ traditional food culture. “We’ve also invited our multi-national staff of 200 to suggest recipes,” he continues, “and we invite local chefs from restaurants in the community to come in and do signature meals to generate interest in our cafeteria.”

Overall, Thurnhofer believes in continually reminding his staff and personally modeling what customer focused service is all about. “I see this as, ‘It starts with the boss.’ They need to know there’s an expectation. They need to see me model that ‘We’re here to serve’ attitude.”