More than 15 years ago, high schools in Henrico County, Richmond, Va., were among the first in the country to offer nationally branded concepts, such as Taco Bell Express, to students. The schools still offer such concepts, but must be more cutting-edge than ever before. 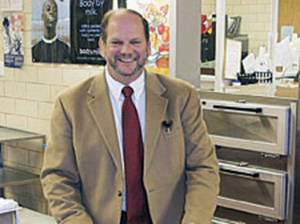 That's because mandated wellness programs have led to huge losses in cafeteria sales, according to Tim Mertz, assistant foodservice director for the district for the past 17 years. Meanwhile, he has seen his free and reduced-price meal population slowly but steadily increasing over the past few years, so "innovation" is a word that suits Mertz, who oversees the operational aspects of meal programs in 64 schools serving more than 49,000 students each day, just fine.

Therefore, in order to best serve this population, and continue to keep his high school foodservice operation off the National School Lunch Program (NSLP), as it has been for the past 25 years, Mertz has been piloting his own plan in one high school this year that allows eligible students greater access to meals while being (he hopes) financially feasible for the district.

Branding's role: When Mertz met with student focus groups back in 1991 and they said they wanted branded concepts, he went out and found that Taco Bell was interested; this at a time before the brand took off in gas stations and airports.

"Since my schools weren't on the NSLP, Taco Bell didn't have to meet the 2-oz. protein requirement," Mertz recalls. "It was good for us, but there are more schools in the NSLP nationally than not, so Taco Bell couldn't get the numbers they needed and pulled out from all schools a few years ago. Now, we have Subway [we assemble product just like a regular store] and we've also had Dominos and Pizza Hut. Little Caesar's Pizza currently has our bid. We take their frozen product and bake it off. It's served daily in our eight high schools and once a week in our middle and elementary schools."

"Sunset Strips (a Tyson Foods branded concept) is wildly popular in all our high schools," Mertz reports. "It accounts for approximately 26% of daily sales." But branded concepts overall account for only 49% of sales in the high schools; 51% is generated by traditional meals, many of which are combos featuring baked chips and drinks.

Mandated wellness: To prepare the USDA-mandated wellness program to combat obesity that was required to be in place prior to the start of the fall 2006 term, Mertz worked with a wellness committee that included representatives from all school system agencies in the county. On balance, he believes they put together "a very solid program that would work." 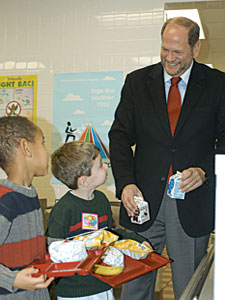 In keeping with the program, packaged chips are now of the baked variety, and a line of pastries was brought in that is smaller and provides fewer calories than those previously sold. All a la carte items now contain less than 30% of calories from fat, a maximum of 35% of calories from sugar, and no item packs more than 300 calories in total.

However, these substitutions weren't made without a hitch. "We pulled off our Subway cookies and the kids went bonkers," he reports. "In one high school, they boycotted the cafeteria for a day. We replaced those cookies with smaller ones, made fresh each day. They meet all the health food criteria, but they're not the same. Sales are down tremendously in the a la carte items. We know that for a fact since we generate a P&L [statement] every month in order to keep our finger on the pulse. Bottom line: kids vote with their sales"

A new approach: Although Henrico County's elementary and middle schools are part of the NSLP, the high schools left the program in 1981 in response to "the Draconian cuts dealt by the Reagan administration," Mertz points out. Therefore, the high schools have had the freedom to offer such concepts as Taco Bell because he and his department set the program themselves.

This school year, Mertz created the Unified Meal Plan (UMP) in response to the dramatic decrease in sales stemming from the wellness changes to the menu, in addition to the steadily growing free-and-reduced population. (At the time the eight high schools went off the NSLP, that population was well under 20%; today it has almost doubled district-wide.)

Mertz contends that putting his high schools back on the NSLP just wasn't prudent. "In my opinion, streamlining our menu to meet USDA guidelines would have hurt our school foodservice program due to the many federal restrictions, without giving us a program that the students would want," he points out.

The UMP advantage: His program's greatest advantage is that it serves the schools' needy population without putting a strain on paying students. "I used the same financial criteria from the USDA for the NSLP without applying to go back on," Mertz says. "I give them a Type A-type lunch (remember that nationally only 35% of high school students take it) or they can use it as a credit for something else, like a Subway sub for $2. Since the credit is now $1.70, they pay the difference of 30¢. It's almost too simple. That credit is the incentive to get those kids to eat something. Now, the paying child supports the program. With no federal, state or local school board money in our high school, we are totally self-supporting."

In the high school where the trial run for the UMP is in place, it will change the demographics from 94 free students this school year to a potential of 1,038 free and reduced for next year. Mertz is banking on the revenue from increased participation to offset the additional meal costs. He points out that while he is giving a credit of $1.70 for lunch, it translates to only 68¢ for the food cost, and labor remains the same.

Twinkies sell: Keeping his options open, Mertz concedes his UMP may fall short. "The numbers in the trial will determine what we do," he says. "We're not opposed to going back to the NSLP, but kids aren't responding by buying the Type A-type meals; they're using the credit more. Nutritionally, we can't continue doing what we were doing, yet we have to make sound decisions based on what kids want. Unfortunately, nutrition doesn't sell, Twinkies do!"
Mertz is currently applying his work experience toward a master's degree in public administration from Virginia Tech in Blacksburg. His thesis is titled "Reversing Gresham's Law," in which he details the implementation of the Five Star Quality Control program he's successfully implemented throughout Henrico County's 64 school foodservice venues for the past three years.

How it works: To ensure that rules, regs and food quality standards are being met, three field supervisors each oversee about 20 schools. Another field supervisor conducts Five Star Quality Control, paying unannounced site visits to check on sanitation, paper work, financials, food quality, etc. If the location scores 90+% throughout the year, it's designated as a Five Star School. Mertz awards a $500 savings bond to the manager and a $300 bond to the assistant manager, and each employee gets a $100 bond. So far, the program has cost about $31,650 (in bonds).

"The first year we expected five schools to qualify but we got 20, and last year we had 3; "that's more than half of our schools," he beams. "You really have to work to get it. Of course, our goal is 100%. In addition, each field supervisor gets a $50 bonus per school that earns Five Star status. All this ensures that with such a large operation we keep up the standards, including little rules like saying, 'Thank you,' to the kids, or saying the child's name when it comes up on the computer. That's made us a much better program, and we are big business.