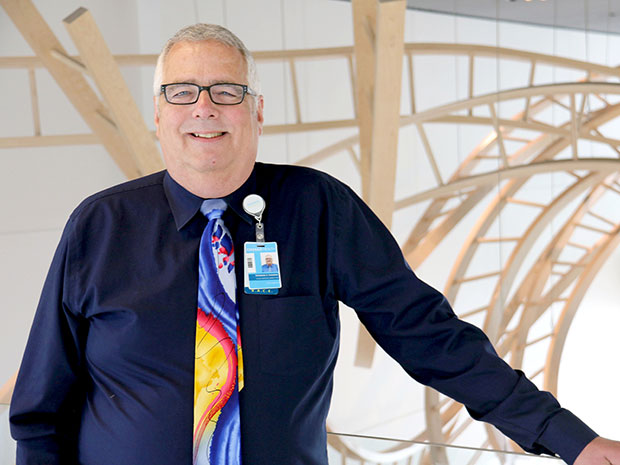 4—Retail outlets managed, including a marketplace,
a restaurant, an express
cafe and a Starbucks

For Thomas Thaman, working in hospital foodservice means setting an example of healthy living for an entire city—and carrying the responsibility of making good food available to the community at large.

“We’ve got a food desert in Indianapolis, and we want to be an inspiration for healthy eating,” says Thaman, who is about to notch 30 years in foodservice and has served as director of food and nutrition at Indianapolis’ Eskenazi Health complex for 11 of his 18 years there. “Good food and exercise is medicine. Our philosophy is that healthcare providers have to set that good example by following the healthy practices we recommend to patients.”

Under Thaman’s direction, the 150-year-old self-operated program runs a bevy of healthy-living initiatives, including a CDC-supported stealth health program to reduce sodium on menu items without announcing it to customers; implementation of a “traffic light” labeling design in salad bars to help diners make healthy choices; a weekly farmers market open to all; and an on-site rooftop “sky farm” with vegetables growing in 6,000 square feet of soil.

Thaman credits Eskenazi Health CEO Lisa Harris for instilling the care-for-all philosophy and allowing his team to experiment—and she likewise is a fan of his work. “Tom and his staff are integral members of the care team; it’s as important as anything else we do here,” Harris says. “They’re just relentless in their pursuit of the next idea. With leadership, you want to be able to point the right people at a target and watch them develop all sorts of ideas to achieve it. Tom is one of those right people, just so energetic about the next innovation.”

For Thaman, those innovations all go back to taking a 360-degree approach. “We knew we wanted to take a look at our menus, but we felt we had to offer multiple types of programs to have the biggest impact,” he says. “[Indiana] does not enjoy great health statistics, to say the least. We tend to be at the bottom of the list for things like obesity. It takes a lot to make a change.”

Perhaps the team’s largest initiative is the sodium-focused revamp of items across Eskenazi’s retail and patient menus.  In 2014, the CDC awarded the Marion County Public Health Department a grant to participate in the national three-year Sodium Reduction in Communities Program. Thaman and his team seized the opportunity to shake up menus and reassess purchasing options to cut sodium and fat levels.

“We used the menu we started with as our baseline, then we started making reductions,” Thaman says. “We added more plant-based items like shaker salads, and certain menu items that are naturally low in sodium. We also did some things like find a chicken breast through our distributor that wasn’t packaged in salt, which was an easy [sodium] savings.”

The changes helped Eskenazi reduce sodium levels by 38% across all menus between January 2014 and July 2016, a statistic with which Thaman is “very, very pleased.” Eskenazi deliberately didn’t highlight the changes to customers, and Thaman is proud that retail sales have increased and overall patient satisfaction has held steady at 90% throughout the duration of the program.

Thaman’s team took the program further to help diners— the 5,000 employees and 165,000 visitors who eat at Eskenazi’s retail locations annually—make smart choices. They developed a traffic light system in which foods are classified as red, yellow or green based on the healthfulness of their nutritional profile, then went to work assessing and labeling foods across Eskenazi. All red-labeled foods were removed from 22 of Eskenazi’s self-operated vending machines, cutting the average sodium content by 31% and reducing the average food cost to 82 cents from 83 cents.

“Sometimes you need to be reminded of the choices you’re making, and it needs to be in your face a little bit,” Thaman says. “All of those small choices add up.” 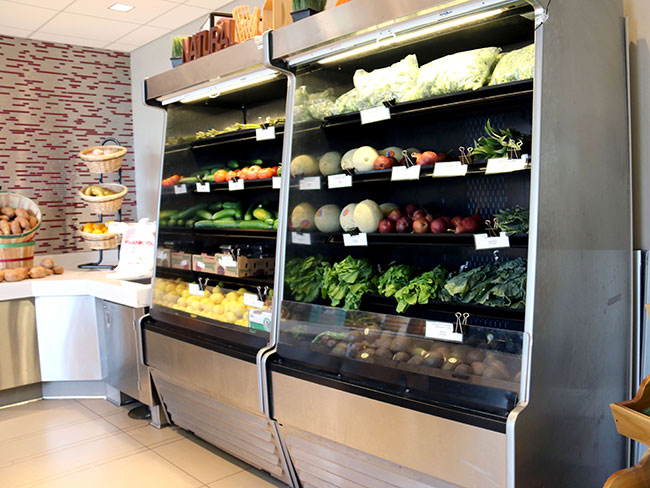 Not everyone in Indianapolis has access to that kind of healthy choice, though. The city ranked worst in the nation for food deserts in 2014, according to the USDA, and earlier this year Congressman Andre Carson introduced the Food Deserts Act in an effort to combat the problem.

Eskenazi is doing its part by offering a weekly farmers market on Fridays, where hospital staff and community members alike can buy fresh produce at prices comparable to or lower than grocery stores. “We don’t make a lot of profit there, but our purpose isn’t to make money,” Thaman says. “It’s to get people coming in and getting access to good, quality food.” This “harvest stand” has been so successful that Eskenazi plans to open a mini grocery store within the next three months.

“I believe that food is a service, and service drives the image of the organization,” Thaman says. “I think people fail to realize how good food ultimately enhances the overall experience in the hospital. If you ask what Eskenazi Health is known for, we’re proud to say we have an exceptional burn unit, a Level 1 trauma center and excellent food and service.”

At 61, Thaman doesn’t plan to retire anytime soon—but now that he’s at “the back half of his career,” he’s focused on mentoring the next generation of FSDs. In reflecting on his career, he says he sees foodservice as his “destiny” and is pleased with his contribution to Eskenazi.

CEO Harris is just as proud. “Tom is just someone you enjoy being around,” she says. “He truly loves his work, and others respond to that very positively. It casts a good glow on all of us.”