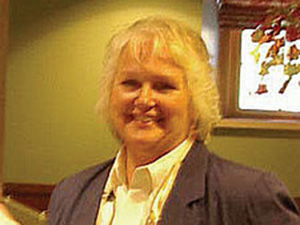 Having spent four years working in nutrition services in several acute-care facilities, Suzanne Cryst, RD, LD, knew there had to be a better fit for her brand of clinical and management talents. Buoyed by American Dietetic Association mentors who helped her pinpoint her strengths, she found what she was seeking in working with the elderly: first at Summit and Hilltop Nursing Home in Cincinnati (1979 to 1992); and currently at Maria Joseph Living Care Center in Dayton.

"I'm one of those fortunate RDs," she confides. "I found my niche in full-time long-term care, working on the management side as well as the clinical. It gives you a chance to see how your decision-making can have positive outcomes."

Maria Joseph, part of the Premier Health Partners network, is a 351-licensed-bed facility also serving an additional 40 residents who live independently in apartments. Since Cryst arrived there four and a half years ago, she has dealt with day-to-day issues on site, as well as serving as liaison with other departments of nutrition services in the network to ensure that her facility has a voice in decisions. In Dayton, Premier members include Miami Valley Hospital, Good Samaritan Hospital, Middletown Regional Hospital and Samaritan North Health Centers.

Satisfaction (almost) guaranteed: At Maria Joseph, Cryst never loses sight of what lies at the heart of this resident-focused care center: choice. Residents choose to come there to live and, when it's mealtime, they must be provided with nutritious and pleasing options. Occasionally, however, delivering the "pleasing" part has been Cryst's challenge, especially during the first few months on the job. Today, she can point to a customer satisfaction rating that has soared from approximately 55% to 88%—in less than five years—as measured by in-house surveys and also by those provided by the National Society for Healthcare Foodservice Management (HFM) Benchmark Express program.

"Our stats are also run with staffing," she reports. "We went down from about 80 FTEs (in 2000) to approximately 50 now, so we're in the 25th percentile for staffing hours as measured by HFM benchmarking. Our food cost is usually in the 30th percentile in benchmarking; having the buying power of Premier since 2000, when we went to a retherm system, has been a lot of help for this 75-year-old facility. It hasn't happened overnight but rather over time."

Cryst has tweaked and innovated in order to improve retherm product while educating and communicating with her staff and residents. "When I arrived two years after this facility went to a retherm system, there were still some challenges that needed to be overcome," she recalls. "Staff and residents didn't fully understand what was going on. They needed someone to help move it forward."

Retherm management: Cryst needed to address how to properly plate and deliver these meals as well as manage the system. Since staff didn't understand the science involved and the procedures for testing time and temperature, outcomes were inconsistent. "We also had some residents who thought that because we didn't cook items on-site from scratch, it wasn't as good quality as before," she explains.

"Our items are prepared at the Central Production Unit where they produce separate items for each of the hospitals (that are part of Premier Health Partners). The hospitals work on a one-week cycle but ours is a four-week cycle, so I select and write menus based on what they can offer us. That makes a big difference in how items are perceived. We had to communicate clearly that 'residents are not getting leftover product served yesterday at one of the hospitals.' It was a process of education and communication that is so vital in effecting change."

Over the years, Cryst has worked closely with Alice Pollard, RD, LD, director of the Central Production Unit. Together they've improved recipes to make them more appealing, perhaps by adding a bit more margarine, salt and other seasonings as they did to the scratch-made mashed potatoes. "They came up with this wonderfully flavored product and when the hospitals (in the system) found out what we had, they started using them, too," Cryst notes.

Managing perception: Although two of the hospitals utilize a conduction system, Maria Joseph has a convection system and, early on, it was a challenge to devise methods to get more moisture on the plate. Through trial and error, Cryst learned that putting some type of sauce over plated ingredients keeps them moist during the retherm process and makes them ultimately easier to chew.

"With medications as well as the aging process, the sense of taste and smell is diminished and altered," she says. "Sometimes residents perceive it as different than it is. So we've done a lot of changing of how we plate and a good amount of recipe development with cooks here to get a positive outcome for our residents."

For example: "Now, we put beef stew in a casserole dish versus directly on the plate," she continues. "Some vegetables need to be in a cup instead of directly on the plate so they don't get hard. We'll use an orange sauce for carrots and add some other flavors to gravy so it's not always a buttered vegetable or brown gravy on meat. Perhaps we could add a little red pepper base for a bit of zing and color."

"Again, we're managing perception visually, plus heightening that aroma as the lid comes off the food," she adds.

Working with nursing and other staff with the objective of creating a more-like-home environment, Cryst has steadily liberalized special diets since her arrival on the scene. Early on, it was close to being a 1,500-calorie diet with two grams of sodium, along with multiple restrictions. Now, residents are offered a regular diet with individual modifications as needed, determined by the clinical staff.

"We're moving to a regular diet with portion control on desserts for those who are diabetic, so they can choose a regular brownie, for example," Cryst says, "but it will be a smaller portion, or it will be prepared with less carbs and calories so what's served to them doesn't look different from what their neighbor gets."

Today, plate presentation has improved dramatically and her staff understands the ins and outs of working with the retherm system. It's one in which trays are loaded off the kitchen tray line onto transport carts that are then delivered to the 18 stand-alone plug-in units on the floors. But Cryst is well aware that some residents still think they don't have a choice as to what they're served.

Getting real: Perhaps they've forgotten they indicated their "likes" and "dislikes" when they first arrived at Maria Joseph, or, more to the point, they've forgotten that four weeks ago they circled their meal choices for the coming month. "We want what we want when we want it," she says. "Also, they're confused because it's not real time. And, when we have our annual inspections, surveyors ask if (residents) have a choice of what they're served. To manage the perception, our solution is to make it more real time."

To address this issue, a selective menu is currently being debuted in the facility's 31-bed rehab unit. Residents there are receiving a paper menu "today" for what they'll be served "tomorrow." Cryst also views the pilot as a stepping-stone to the introduction of room service. She's now waiting to see how the new menu affects production and whether the requisite forecasting system is doable.

Green-housing residents: Part of Cryst's job is to plan for the future—at least five to eight years down the road. She's envisioning one that may be drastically different from today's reality—but even more like home for the residents. One concept currently under consideration is The Green House Replication Initiative, an alternative approach to long-term care (visit thegreenhouseproject.com for more info).

"There are many Green House communities being developed with small groups to be served family-style," she reports. "It's a big movement out there and it's being talked about now within Premier Health Partners from a foodservice standpoint."

But today, Cryst knows exactly what she's doing in her own personal realm. This mother of three and grandmother of five fondly recalls the lesson she learned from her own parents when she was very young: "You don't just take." That's one of the reasons she's currently serving as chair-elect of Consultant Dietitians in Health Care Facilities, an ADA practice group. "I'm committed to mentoring because these people were there for me," she asserts. "Those young ones coming out (of college) with an interest in geriatrics are our future—and I want to give back."