Through the interior wall of windows of her elevated office, Lt. Sheila LeJeune, MS, LDN, RD, has an unobstructed view of the beehive of activity below on the production floor at Lafayette (La.) Parish Correctional Center, where she is foodservice director. No matter the work of the moment, be it re-doing menus for the two-month period to come, drawing up equipment specs or perhaps conferring with opportunity-buy reps, LeJeune keeps a sharp eye on the comings and goings of the approximately 20 inmate workers below. 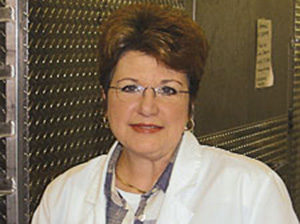 She does so for good reason. On a recent day, she had to call down to correct one inmate who was washing a blender, base and all. "He was plugging in a blender he'd just washed while it was still wet, he could have gotten electrocuted," she explains. "I try to tell them where I'm coming from without shouting because then you lose control. We are in charge of providing care, custody and control as well as compassion for the inmates. 'Compassion' was added by our deputy captain, everyone is always to be treated like a human being. It's all part of our mission statement."

Far cry from filthy: LeJeune's personal mission for the past 23 years has been to run a ship-shape and cost-effective foodservice operation now serving more than 1,000 inmates per meal, including 100 females, for about $2 a day ($2.04 in September). In fact, it is the first correctional center in Louisiana to be accredited by the American Correctional Association (ACA), as it has been for the past 12 years, and by the Commission on Accreditation for Law Enforcement Association (CALEA). In addition, the Lafayette Health Department has recognized the staff as operating one of the cleanest commercial kitchens in the city. It's a far cry from the "woefully filthy" kitchen she found upon her arrival (in another building) more than two decades ago.

Like so many of her correctional foodservice cohorts across the country, LeJeune's original career goal did not focus on working behind bars. After teaching institutional administration for several years at her alma mater, the University of Southwest Louisiana (now known as the University of Louisiana-Lafayette), LeJeune worked in a hospital as a consultant. An appeal by a doctor who also did some work at the jail led her to a part-time consulting role to help it develop special diets.

"One of the biggest reasons for hiring me was a lawsuit brought in 1982-'83 against the Lafayette Sheriff's Department by a federal inmate who was not provided with a diabetic diet while incarcerated," she says. "The department would have lost this million-dollar suit had it gone to court; since he tried to escape the case didn't proceed. At that point, the department realized this could happen again and again if they didn't get these special diets under control."

Under budget: LeJeune and her staff of 10 foodservice personnel and about 20 inmates served about one million meals in 2005, of which 161,107 were special diet meals she developed, including calorie-controlled diabetic diets, low salt, bland, modified consistency diets (including clear liquid, full liquid, soft and puree) renal and pregnancy diets. From the outset, LeJeune has consistently aimed to keep food costs low while providing high-quality meals, and she always has money left over from her $1.2 million annual budget.

Sometimes it's used for equipment purchases, like the $50,000 spent last year for a new walk-in cooler, a new three-compartment steamer and tilting skillet, but often it's disbursed to other departments. "Last year I spent $825,000 in raw food (purchases) to put out about one million meals," she says. "Per day we give inmates about 3,000 calories versus 2,500 required by the state of Louisiana. My inmate employees can eat double portions plus additional food items and coffee, some of the perks of the job, but otherwise there's always the canteen if they want to purchase more food."

Seven-fold increase: The transformation of the department progressed slowly and steadily from LeJeune's first day on the job and during that first year as a part-time consultant, then accelerated as she went to full-time the following year. "In 1983-'84, when I first started as foodservice director, there were about 200 inmates," she says. "In December 1984, the new jail opened and we put out 13,000 meals just that first month. Shortly after, they double-bunked, and now we're up to 90,000 meals per month out of the same kitchen! I started with three deputies in the old jail and now I'm up to 10."

"When I started, the place was so filthy I didn't eat here for two months," she continues. "There were no sanitation or food-handling standards in place. During those first few months we got it cleaned up, but there was a lot of resentment toward me by the deputies because I was in control and not them."

Grabbing the opportunity: As the weeks became months, the results of the standards and protocols LeJeune was putting into place and the systems she was implementing became evident to all involved. She initiated a bidding system, quarterly for bread, weekly for the more volatile prices of meat and produce, and monthly for staples. For milk and chemical purchases, the facility tags along with the school state bids, "since I'm an equal opportunity user," LeJeune proudly admits.

"I also do 'opportunity buys', overruns or excess items manufactured for large groups like the military or chain restaurants that need to be sold. My vendors are very good and will refund my money if product is not satisfactory."

LeJeune recalls that, early on, one opportunity-buy vendor pursued her business for five years but she didn't have enough freezer space at the time to accommodate his product. Now, she'll get 5,000 to 6,000 pounds of product, usually meat, but sometimes prepared cookies or cookie dough, the kinds of product she could not afford to buy otherwise.

Last month, she spent $1.90 to $2.04 per inmate per day for three meals by taking advantage of the lowest bids within the bidding system as well as opportunity buys that often trump the low bid. For example, a recent low bid for steak fingers was $1.46 per pound, but LeJeune paid $1.16 with her prime opportunity-buy vendor. "That's a big difference when you're buying 300 pounds for one meal," she asserts.

Seasonal produce from the nearby prison farm is also menued. Deputies and inmates handle the processing, freezing and storage processes in the kitchen of a nearby abandoned school that LeJeune has refurbished with used equipment.

Along the way, LeJeune created the position of inventory control officer; working closely with him, she now buys all spices in bulk. Purchasing 155 pounds of garlic or 50 to 100 pounds of paprika for the facility is not unusual. "We make our own seasoning concoction and I'm paying $1.50 a pound for red pepper," she explains. "I say, 'Just send me the sacks, I have my own containers.'"

Choreographing the steps: Over and above all the systems she's implemented and the results she's effected, LeJeune believes the most important aspect of her operation is the menu, which she writes. But of almost equal importance is the tight choreography executed in getting that meal out to the inmates.

Product must be ordered and, in house, the items pulled out and defrosted to serve on time, she points out. "I'm directing traffic, the sergeant on the floor directs production and the inventory officer has to make it all happen, he's computer-trained and does all the ordering on-line," she says. "He and I modify the menu. I believe menu variety is the spice of life; mine is for a whole two months, versus one day at a time when I arrived here. You have different things to add in as they come along with opportunity buys. If you send out a tray that looks good, it says, 'We care about you.' It also keeps the officers safe without riots over food."

Three times each day, meals are loaded on 12 carts (heated in most cases, except for some cold breakfasts), each holding 94 trays, and delivered to pods on five floors. Overall, about 1,000 inmates are served, as well as deputies and staff in a small cafeteria, plus 26 people in a drug rehab program who purchase meals priced at $2. About 145 work-release residents are served hot meals for breakfast and supper and are provided with a bag lunch to take out on the job.

LeJeune quickly learned and applied efficient ways of maintaining order, cutting down on waste and setting out responsibilities, all with a loving touch. "Here, they call me 'The Lady in the Gun Tower' since I have an elevated office and they know that I know what I'm doing," she asserts. "My expectations are high because if you don't expect a lot you won't get a lot. That's why a lot of inmates are here, their boundaries weren't drawn clearly.

"But I also know, in any area of foodservice, not only in corrections, a foodservice director is nothing without the loyalty of their staff."