Roger Knysh has transformed the foodservice at Berkshire Health System by: 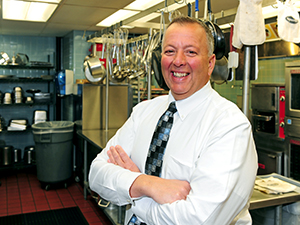 When it comes to wellness and sustainability, Roger Knysh, the director of nutrition and food services for Berkshire Health System in Pittsfield, Mass., is as innovative as it gets in the foodservice industry.

During the past decade, he led Fairview Hospital in Great Barrington, Mass., to become the first hospital in the nation to stop the sale of sugar-sweetened beverages, opened on-site gardens within Berkshire’s two-hospital, four-campus network system and worked with farmers to add locally-sourced food on the menus.

Much of Knysh’s focus on healthy eating and sustainable practices stems from an informal brainstorming session in 2006, with other New England hospital foodservice directors and Health Care Without Harm, an international coalition of healthcare systems, professionals and organizations, that promotes environmentally responsible healthcare. Their objective: To discuss and implement the HCWH’s goal of promoting healthy dining in hospitals across the country.

Impressed with HCWH’s vision, Knysh led Fairview, in 2007, to become the first hospital in Massachusetts to sign the organization’s Healthy Food in Healthcare Pledge, which asks healthcare industry professionals to “first, do no harm” and treat food as well as its production and distribution as preventive medicine. “Right away I signed the pledge,” Knysh says. “Then we started talking about areas of opportunity.”

Since then, Knysh has helped Fairview Hospital eliminate all fried foods and trans fats from patient and retail menus, and develop an on-site garden that grows tomatoes, peppers, squash, basil, celery, squash and garlic. He also switched the hospital to whole-wheat bread products.

To promote healthier eating, Knysh had the catering department reduce  portion sizes. Instead of sugary drinks, Knysh began serving filtered water and unsweetened ice tea. “We pulled chocolate-chip cookies off the menus and offered only fresh fruit as a dessert item,” he says.

The hospital also started purchasing only fair-trade coffees and switched the facility to environmentally-safe cleaning products.

They also began using real china instead of paper plates to reduce waste.

“Roger has been on the cutting edge of several foodservice initiatives over the years,” says John Giambarresi, an account executive with Boston-based RFC Healthcare Hospitality Solutions, a consulting firm that has worked closely with Berkshire in the past. “He is active in many organizations that keep pace with the latest green initiatives, and he supports locally grown products.”

Knysh says there hasn’t been much pushback from customers over the menu changes—for two reasons. “We have a very active wellness program with the Berkshire system, and I get solid support from senior leaders,” he says. “We’re not telling people they can’t have sweetened beverages [and other unhealthy foods]. We’re just saying that we choose not to sell them.”

When it comes to boosting the sale of healthy items, Knysh says it’s simply a matter making the food look and taste as good as possible. That’s why he’s doubled the size of the salad bar at Fairview Hospital and filled it with local produce. He also serves scratch-made soups.

“They are low-fat and low-sodium, but they are very flavorful,” Knysh says. “We are known throughout the community for the quality of our soups.”

Knysh says driving the sales of healthy items is about giving customers a variety of choices from made-to-order quesadillas, panini, pasta dishes and entree-size salads.  In many cases, the dishes are prepared in front of customers. “We do a lot of action stations,” Knysh says. “Bringing the action out in front of the house has really helped our sales.”

But serving and growing healthier food isn’t the only aspect of the foodservice program that energizes Knysh. He’s just as motivated to help employees improve themselves—even if it means they get hired away by another hospital department.

“Foodservice is usually an entry-level position,” he says. “We can hire somebody right out of high school and they can work for a couple of years until they go to or graduate from college. Or we can offer them a chance to advance. Even if they are promoted somewhere else within our system, I consider that a win.”

To effectively retain his employees, Knysh developed a career improvement training program for his department. Each year a theme is picked, such as project management training. Knysh then meets with his employees seven or eight times a year, and has each of them present on a topic related to the training, coupled with a formal graduation and celebratory dinner.

“It’s been very successful,” says Knysh says. “We’ve haven’t had any turnover because of it, because it keeps them interested and always learning.”

This has not only helped his employees learn, but it also has benefited the department. “One of our cooks is a great photographer, and he took pictures of all our room-service entrees,” Knysh says. “We were able to use those photos as model for all staff to see, so they can duplicate the same dish the same way every time.”

Another cook developed a process for visiting patients in between meals, offering them coffee or tea and a snack. She would introduce herself as the evening cook, and then ask them about any special meal requests they have. “That has really improved our patient satisfaction scores,” says Knysh, who moved into his current position at Berkshire Health System in 2014.

Now that Knysh is overseeing foodservice for the entire Berkshire Health System, he’s using the sustainable practices he implemented at Fairview Hospital as a corporatewide template.

He’s already created a program for every campus to transport food waste to local farms to be used as compost.Knysh has also collaborated with Berkshire Grown, a nonprofit organization of farmers and restaurateurs to negotiate a yield and price for certain crops with farmers before the growing season begins. The agreement guarantees  local farmers that they will have a buyer for their crops and gives assurances to the hospital system they will have ready access to local produce.“We are trying to also take care of the people who are taking care of us,” he says.

At the 302-bed Berkshire Medical Center, he’s added a herb garden and started an on-demand room service program in the maternity and orthopedic units, which has reduced meal costs by diminishing the number of re-ordered meals. “Patients are loving it,” Knysh says. “Because they can get exactly what they want, when they want it.”